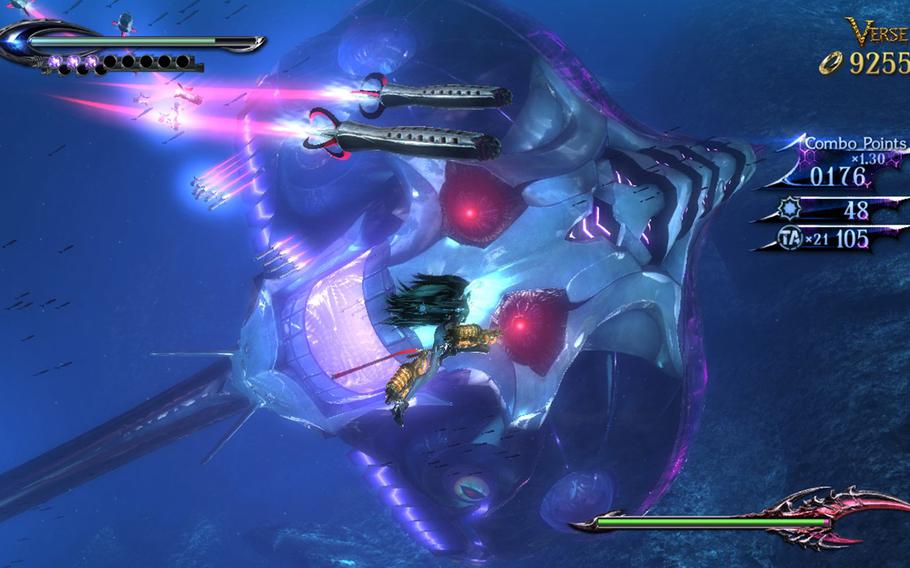 The over-the-top battles from "Bayonetta" return in the Wii U sequel. Fans can rest assured that no punches were pulled. (Screenshot)

The over-the-top battles from "Bayonetta" return in the Wii U sequel. Fans can rest assured that no punches were pulled. (Screenshot) 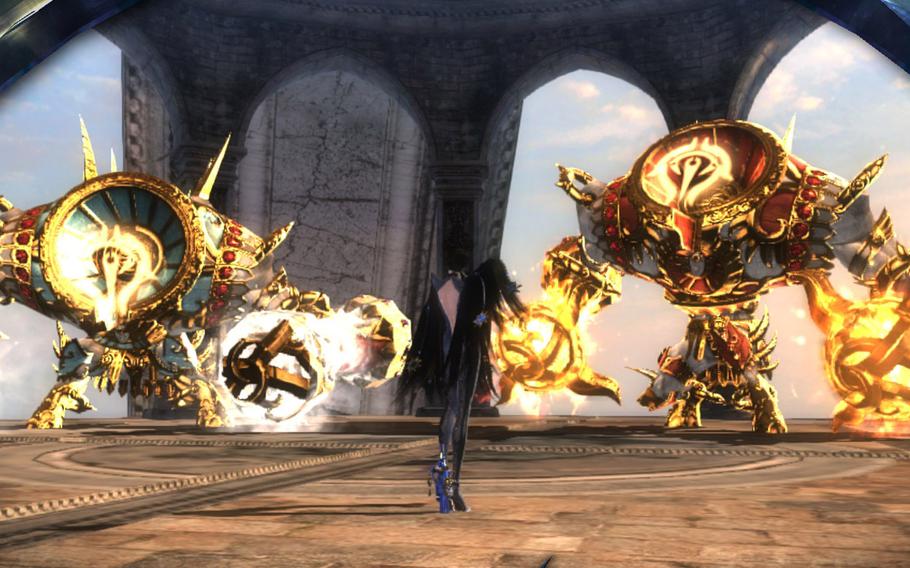 In "Bayonetta 2" enemies are varied and each have their own strengths and weaknesses. (Screenshot)

Let me get this one out of the way right now. Yes, “Bayonetta 2” is just as explicitly sexualized as its predecessor, if not more so. Not a single lingering close-up, nude combat segment or pole-dancing attack animation has been toned down one iota for the Wii U audience. Despite Nintendo’s kid-friendly image, “Bayonetta 2” is unequivocally not for children, though I’d stop just short of calling it a “mature” game.

Bottom line, if hyper-stylized sexual themes and content are offensive to you, this game is absolutely not for you.

That being said, everything else — despite or enhanced by that overt sexuality, depending on your point of view — “Bayonetta 2” is simply sublime.

Everything that made the series a cult-favorite has returned, from the frenetic, combo-laden combat to the anime-meets-Dali art style. Everything that caused fans to basically force Platinum Games to resurrect the series is back, turned up past not-only 11 but to where numbers no longer have any meaning.

This is a game that centers on an 8-foot tall witch who fights evil with magic guns strapped to her stiletto heels — and that’s the tamest part of the entire experience. While on her newest mission to save a friend from the depths of hell, Bayonetta will battle angels, fight through the belly of a demonic manta ray and travel through the gates of heaven while battling skyscraper-sized dragons.

The story is basically a jumble of oddball nonsense and the game does have the annoying habit of taking control away from the player to focus on the plot a bit too often. Thankfully, it’s easily ignored. Cut scenes can be skipped and after the first few chapters, the gameplay segments between them grow longer.

And what a blessing that gameplay is.

The combat in “Bayonetta 2” is an encapsulation of everything that is great about video games. Fans of “Devil May Cry” will feel right at home here. There is a jump, punch, kick and weapon button. Stringing together combos will result in more powerful attacks, and higher combo counts fill various meters that can be expended to pull off a variety of super-moves. It’s a basic setup that has an incredible amount of depth.

Expert players will have a great time trying to pull of monstrous hit streaks, activating “witch time” (slow-down that happens when a dodge is pulled off perfectly) and finishing off foes with vicious final attacks. Newer players are brought up to speed as the game progresses them through harder and harder challenges and there is a practice mode for those needing some extra tutelage.

Fans of the previous “Bayonetta” will be happy to know that the combos have been smoothed out a bit. I found them easier to pull off, with the margin of error on inputs and dodges to be much friendly. That’s not to say the game is much easier. The most common cause of me having to put down the controller was the finger-cramping that came with fighting off wave-after-wave of monsters. On higher difficulty levels, the AI will destroy lazy players.

Those aren’t just cosmetic rewards, either. The various weapons you unlock have enormous impacts on the flow of combat and they can be swapped out instantly for bigger and better combos, which of course, increases your score. The direct correlation between player skill and reward keeps the combat – and by extension the game – from ever growing stale.

It helps that they game doesn’t wear out its welcome. The base game could be finished in a matter of a couple of days, it’s going to take most players months to get through all the content Platinum stuffed into the Wii U package. There are roughly 16 levels to play through and they can be repeated at any time to farm currency and/or points.

In addition to the base game, there is a robust multiplayer mode that has players wager on who will pull of the better combo and, an absolutely absurd amount of unlockables to obtain, including Nintendo-themed costumes that range from funny to slightly disturbing. Oh, and if that’s not enough, Platinum went ahead and included an enhanced version of the first “Bayonetta,” playable from the start.

There are few games in recent memory that have as much content as “Bayonetta 2” and none that can are as unique. There just isn’t anything quite like “Bayonetta 2” on the market and that alone makes it worth picking up if you’re a Wii U owner.

Just don’t forget that you were warned about the explicit content.

Bottom line: If you’re okay with tongue-in-cheek sexual content and some anime-inspired storytelling, then “Bayonetta 2” is absolutely worth buying. If those things are not up your alley, then this game may not be for you.