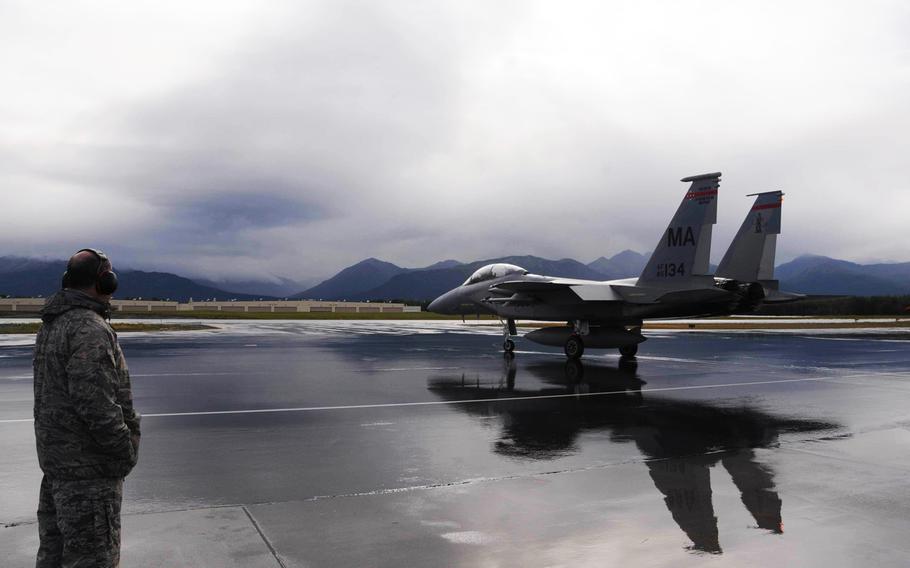 An F-15 Eagle from the Massachusetts Air National Guard's 104th Fighter Wing taxis down the flight line Aug. 5, 2011, prior to take-off while deployed to Joint Base Elmendorf-Richardson, Alaska, for training. (Anthony Mutti/U.S. Air Force)

The pilot’s commander said he could not confirm a report that a witness had seen the pilot eject and a parachute open.

“It’s a traumatic event for everyone here, and we’re thinking about the family and keeping our thoughts and prayers with them,” said Col. James Keefe, commander of the 104th Fighter Wing based in Westfield, Mass. “Hopefully we’ll get a good outcome.”

Moments before the crash, reportedly shortly after 9 a.m., the pilot radioed a distress call to notify air traffic controllers in the Washington, D.C., area that something was wrong with the plane, Keefe said.

“The good thing was he did have notification something was wrong with the aircraft, and he did make that call to the Washington center,” he said, declining to specify the reported problem.

The Massachusetts Air National Guard has not released the identity of the missing pilot.

At least one local first responder was able to follow a heavy plume of smoke to the crash site near Deerfield, Va., arriving within an hour, local newspaper The News-Leader reported.

“I’m on location, with smoke, and we do have debris,” the paper reported a breathless emergency responder radioing at 10:04 a.m. “I got debris everywhere ... I haven’t located anybody.”

Virginia State Police officials said the plane had crashed on level ground near a mountain known as Elliott Knob.

“The crash site is a deep crater surrounded by a large debris field within a heavily wooded area,” said Virginia State Police spokeswoman Corinne Geller. “There are no residences nearby nor were there any injuries of residents.”

By midday, rescuers were searching for signs of the pilot using helicopters, Keefe said. Local fire and police agencies now have the lead, but military personnel and equipment are flowing in, and the Virginia Air National Guard is expected to take over soon, he said.

Among the gear needed is satellite communications equipment, because the national forest area where the plane went down lacks cell phone reception.

Pilots typically fly at between 30,000 and 40,000 feet at a speed of about 500 knots on such trips, he said. The pilot was at a relatively high altitude when he made the distress call, Keefe said.

Keefe said there had been no radio contact with the pilot since the crash, but added that pilots are trained to dump their survival gear when parachuting into wooded terrain to avoid getting hung up on trees.