Austin says no decision has been made yet on Afghanistan troop withdrawal, but 'violence must decrease now’ 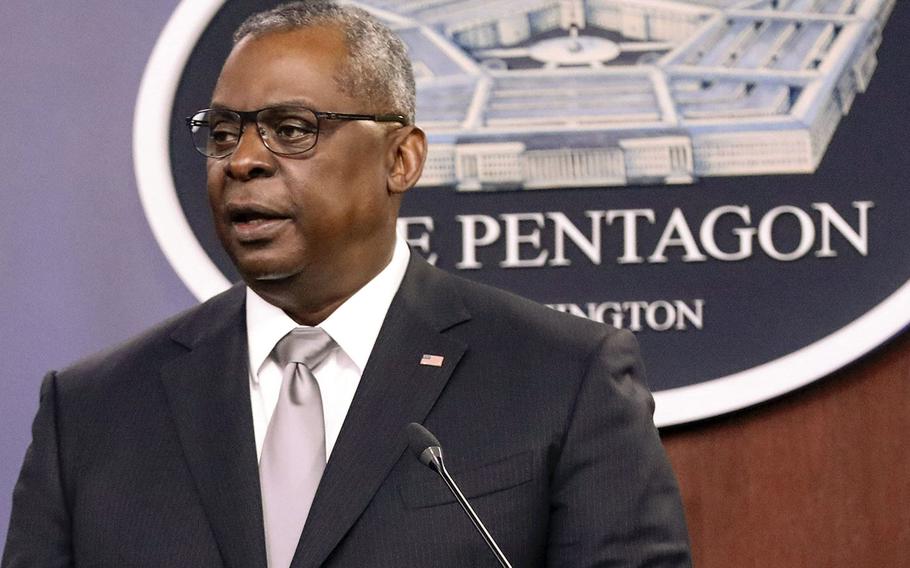 WASHINGTON — The United States has yet to decide the future of its military posture in Afghanistan, Defense Secretary Lloyd Austin said Friday, urging an end to violence in the nation where American troops have been fighting for nearly 20 years.

“The United States will not undertake a hasty or disorderly withdrawal from Afghanistan that puts [Afghan military] forces, or [NATO’s] reputation at risk,” Austin told reporters during his first news briefing as the Pentagon’s leader. “In the meantime, current missions will continue, and of course commanders have the right and the responsibility to defend themselves and our Afghan [military] partners against threats.”

Austin spoke to reporters one day after the completion of a virtual NATO conference. He said he had assured NATO allies, who have contributed troops to the Afghan war effort since its launch in 2001, they would not be surprised by President Joe Biden’s decision on Afghanistan, whatever his verdict might be.

“We will consult each other and consult together, decide together, and act together,” Austin said he told NATO allies, who were at times blindsided by decisions made during former President Donald Trump’s administration.

Austin is now leading a federal government-wide review of the U.S. military posture and other roles in Afghanistan, as the United States faces a May 1 deadline to remove all of its forces from the country under an accord struck last year between the Taliban and Trump’s administration. But U.S. military and civilian leaders — including members of Trump’s former administration — have long said the Taliban has failed to keep its commitments to the agreement struck Feb. 29, 2020, in Doha.

“Clearly the violence is too high right now and more progress needs to be made in the Afghan-led negotiations,” Austin said. “I urge all parties to choose the path towards peace. The violence must decrease now.”

Under Trump, the United States withdrew about half of its remaining troops in Afghanistan during the final weeks of his administration, leaving Biden with about 2,500 service members in the country. Pentagon officials have declined to discuss whether Biden would consider increasing the military force in Afghanistan if he does not withdraw troops by May 1.

Some worry the Taliban, which has largely lived up to a commitment in the agreement to avoid attacks on U.S. troops, will return to targeting American and NATO forces after May 1.

Feb. 8 marked one year since the last American combat deaths in Afghanistan, by far the longest stretch without a U.S. service member killed in action in the war’s two decades. Some 2,300 American troops have died during the war.

Retired Marine Gen. Joseph Dunford, who served as chairman of the Joint Chiefs of Staff from 2015 to 2019, told lawmakers on Friday that the United States might not have enough troops to defend itself from renewed Taliban attacks.

Dunford, who once led the Afghanistan war effort, served on a Congress-mandated panel to study the deal with the Taliban. On Friday, he told members of the House Oversight and Reform Committee's subpanel on national security that the U.S. should try to negotiate with the Taliban to extend the May 1 withdrawal deadline.

The former general said he believed the Taliban might consider such a renegotiation as the group seeks legitimacy within the international community, sanction relief and foreign aid.

“We assess that the Taliban recognize they cannot achieve their political objectives merely through violence,” Dunford said.

The Taliban, meanwhile, have issued their own warnings this month that U.S. troops should withdraw.

Taliban spokesman Zabihullah Mujahid warned last week that the insurgents “will definitely return to war” if the U.S. “rejects this deal,” but he did not indicate whether the group would consider extending the May 1 deadline.

Mohammad Abbas Stanekzai, the deputy leader of the Taliban team that negotiated with the United States last year, told Voice of America in January that if American forces stay in Afghanistan into May, “we will also kill them.”

Austin on Friday said he and Biden were committed to somehow ending America's longest-ever war.

"We are committed to a responsible and sustainable end to this war, preventing Afghanistan from becoming a safe haven for terrorist groups that threaten the interests of the United States and our allies, and ensuring a just and durable end to this long-running conflict," the defense secretary said.