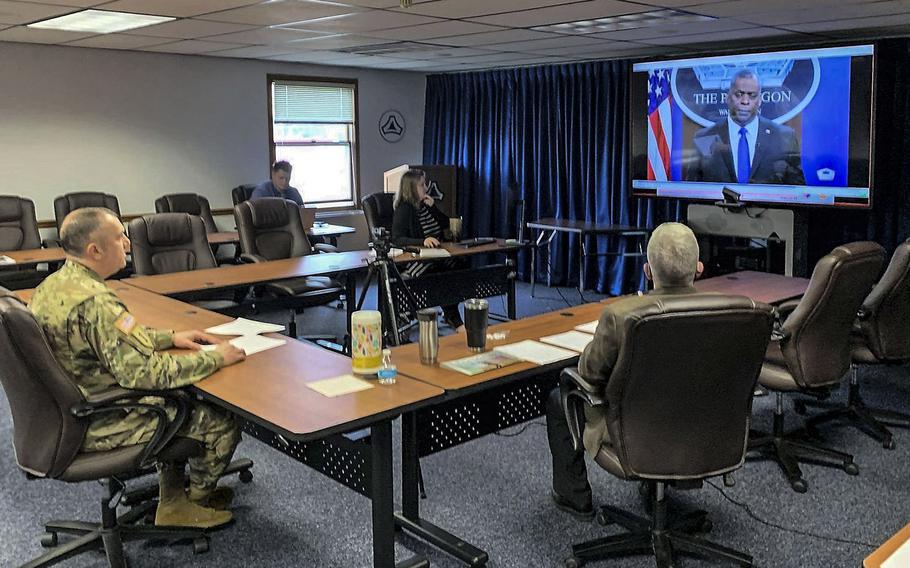 A new Pentagon panel will study extremism within the military ranks, including the ability of the services to weed out recruits with extremist views and whether military law or regulations should be amended to address the issue, according to a memorandum released Friday.

Defense Secretary Lloyd Austin charged the new Countering Extremism Working Group with overseeing a study meant to provide the Pentagon “greater fidelity on the scope of the problem,” according to the memo. It comes as the active-duty military has in recent days completed one-day stand downs to discuss extremism within the ranks. The stand downs were ordered by Austin shortly after he took office in late January and in the wake of the Jan. 6 attack on the Capitol by some supporters of former President Donald Trump.

“The vast majority of those who serve in uniform and their civilian colleagues do so with great honor and integrity, but any extremist behavior in the force can have an outsized impact,” Austin wrote in his memo issued Friday after he met with the civilian leaders of the military departments to discuss initial findings from the stand down.

John Kirby, the Pentagon’s chief spokesman, declined to discuss specific findings from the stand downs, saying officials needed time to study their results. But he said the service secretaries told Austin that troops want clearer information about what constitutes extremism.

“It was clear to the secretary that [the service secretaries] took it seriously, [and] that they believe their people across the force took it seriously,” Kirby said of the Friday meeting. “One consistent thing [Austin] did hear was that the force wants better guidance … about what extremist activity really is — guidance that is as clear as possible.”

Military regulations are murky about precisely what constitutes extremist activity, and current Defense Department rules do not bar troops from membership in extremist organizations unless they actively participate in activity deemed illegal or that could harm military order and discipline. Austin has charged the new group with immediately reviewing the Pentagon’s rules regulating extremism, including whether the Uniform Code of Military Justice should include a specific crime related to extremism.

The panel’s efforts would likely examine whether the military should expel troops found to be inactive members of extremist organizations, but Kirby said it was too early to determine precisely what changes could be made.

In addition to its mandate to review military law and policy, the group is also to examine the Defense Department’s ability to screen potential recruits for extremist ideologies, including probing processes to better screen applicants’ social media.

The group will also review Pentagon training material, including its insider threat programs, to determine if it is adequate or needs to better educate troops on extremism.

In Austin’s memo, he asked the panel to address so-called “gray areas,” such as troops who do not express extremist views or act on them, but do things such as “reading, following and liking extremist material and content” online.

The defense secretary ordered the military services to work together to standardize screening questionnaires for potential recruits meant to weed out those with extremist views and “ensure only the best qualified recruits” are accepted. The services are also instructed to ensure it is clear to candidates that false answers on questionnaires could be punished with criminal action for “false enlistment.”

Austin also directed the service secretaries to update their training for service members leaving the military to include education about the “potential targeting of service members by extremist groups.”

A Pentagon study conducted last year concluded extremist groups were increasingly looking to recruit current and former military members for a variety of reasons, including their leadership skills, weapons and tactics knowledge, and the sense of legitimacy veterans could lend to their cause, officials have said.

“More needs to be done to educate and inform transitioning members about who or what are waiting for them on the [civilian] side,” Kirby said. “We have to focus on how to prepare transitioning member to be aware of that interest in them, and know what it feels like, looks like and sounds like when these groups are targeting them.”

Kirby reiterated the Pentagon’s contention that anti-extremism efforts are not aimed at blocking troops from holding political or religious views, a charge some lawmakers and others have lobbed at Austin since the initial announcement of the stand downs in February.

The efforts are meant to root out those who hold “extreme hatred” and discriminate based on ethnicity or “personal backgrounds,” Kirby said.

“This is not about being the thought police,” he said. “It’s not about identifying what you as an individual [think] between your ears. It’s about what you do with what’s in between your ears — the behavior and conduct that is inspire or influenced by [extreme] ideology.”

The Countering Extremism Working Group is to be led by Bishop Garrison, a top adviser to Austin charged with counseling him on issues including diversity, equity and inclusion. Other members of the group will include senior officials from each military service, outside experts on extremism and officials from other federal agencies, according to the memo.

The group will first meet in mid-April and is expected to provide Austin with initial recommendations for mid-term and long-term actions that the Pentagon can take within 90 days, Kirby said.