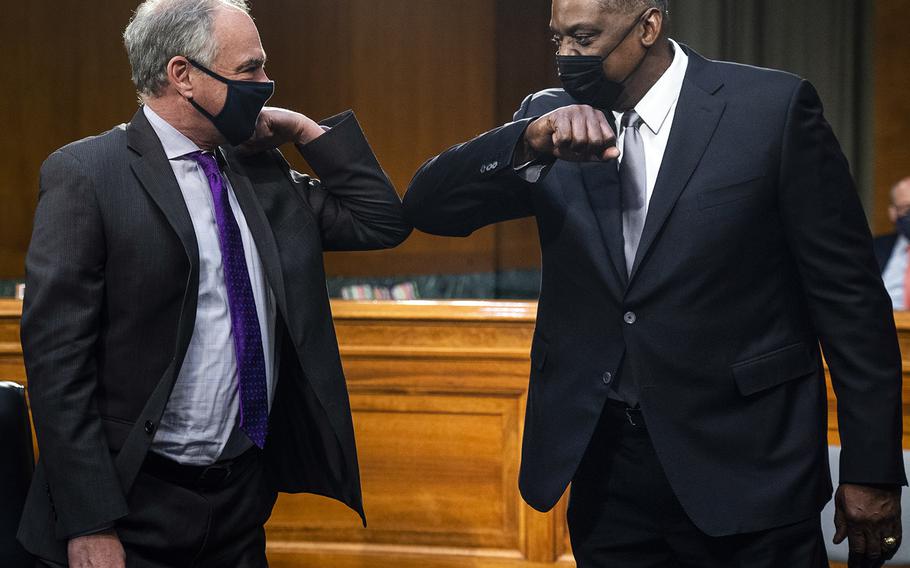 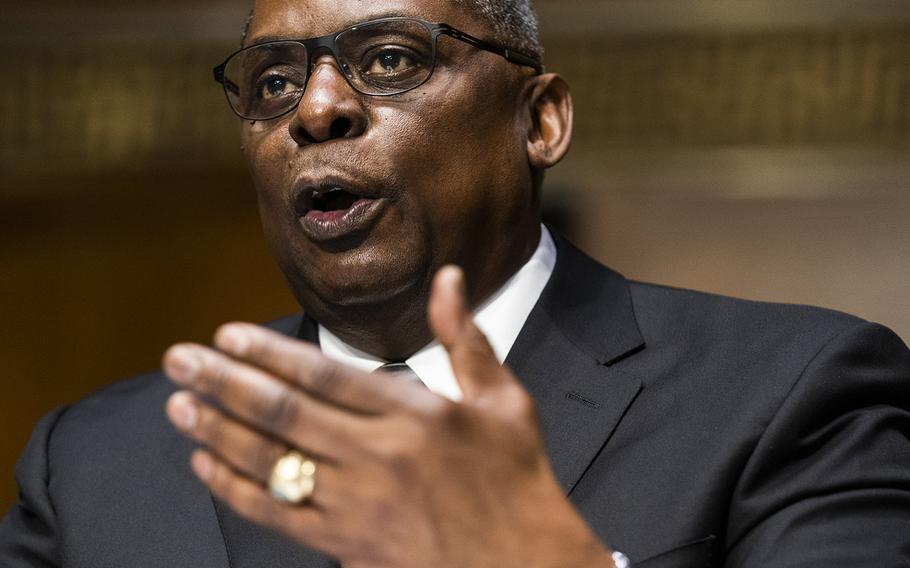 Retired Army Gen. Lloyd Austin, President-elect Joe Biden’s nominee for defense secretary, committed Tuesday to rebalancing decision-making power in the Pentagon from military officials to career civilians and named addressing China and the ongoing coronavirus pandemic as his top priorities, if he is confirmed.

Austin, who spent 41 years in the Army and retired in 2016 after leading the Defense Department’s U.S. Central Command, told the Senate Armed Services Committee that he understood the “enormous difference” between leading in uniform and serving as the civilian leader of the Pentagon. Like former Marine Gen. Jim Mattis, President Donald Trump’s first defense secretary, Austin requires a waiver of the law that mandates a seven-year “cooling-off period” for retired military officers before they can serve as the Pentagon’s top civilian.

“I was a general and a soldier, and I am proud of that,” Austin said. “But, today I appear before you as a citizen, the son of a postal worker and a homemaker from Thomasville, Ga. I am proud of that, too. And if you confirm me, I am prepared to serve now — as a civilian — fully acknowledging the importance of this distinction.”

Pressed by lawmakers about efforts that he would take to ensure the American tenet of civilian control of the military, Austin said he would surround himself with career civilian policymakers and work to ensure the Pentagon’s ranks were filled with “experienced and competent, qualified civilians.” Civilian roles, during Trump’s years as president, went largely unfilled at the Pentagon. But Austin also committed to ensuring the civilian-led Office of the Secretary of Defense was empowered to make critical decisions across the entire department, after Mattis shifted significant policy-making efforts to the military-led Joint Chiefs of Staff during his tenure.

It remains unclear whether Austin will receive the votes needed to secure the waiver. The measure must be passed by the Senate and the House, and several Democratic and Republican lawmakers in both chambers have said they would oppose granting the waiver.

Among those who committed to voting against the measure on Tuesday was Sen. Tom Cotton, R-Ark., who called his 2017 vote to waive the law for Mattis “a mistake.” Cotton said he worried granting a second waiver just four years later would signal to the American public that the exception was routine and only military officers have the national security expertise to lead the Pentagon.

“My decision reflects not at all on you personally or your record, which I respect,” Cotton said. “Rather, I believe Congress should no longer grant such waivers at all.”

Sen. James Inhofe, R-Okla., the chairman of the committee, indicated he would support Austin’s nomination. While, Sen. Jack Reed, D-N.H., who later this week will become the committee’s new chairman, has yet to say publicly whether he would support the waiver, but he praised Austin’s “long and distinguished” military career.

Austin’s confirmation will not be considered by the full Senate immediately after Biden is sworn into office Wednesday as the 46th president, as has been the case for many past Pentagon leaders at the beginning of a new administration. It must wait until both chambers of Congress vote on the waiver, which will not come until Thursday at the earliest.

The House is expected to vote Thursday afternoon on Austin’s waiver after a “closed door” meeting for members with the former general, House aides said. Initially, Austin was expected to testify publicly Thursday before the House Armed Services Committee, but that hearing was scrapped because House leaders have not formally named members of the committee.

“It has become clear that full committee membership will not be finalized before Thursday’s scheduled hearing to discuss civilian control of the military with the Secretary-designate Lloyd Austin,” said Monica Matoush, a spokeswoman for the House committee Democrats. “As such, we cannot yet convene our committee organization meeting or formally conduct committee business like a hearing.”

If Austin is granted the waiver and confirmed, he will take over a Pentagon in the midst of a transition from the long wars in the Middle East and Afghanistan to focus primarily on the threat of rising nation-state powers, namely China and Russia. But it’s a Pentagon that has also struggled in recent years with major internal issues such as rising reports of sexual assault and harassment in the ranks and Pentagon warnings this week of increasing signs of troops holding extremist — largely white supremacist —views. Austin, pushed by several lawmakers on those issues, vowed to take new approaches to the issue and stamp out sexual assault and harassment and extremism in the force.

Austin indicated Tuesday that the ongoing coronavirus threat, which has killed some 400,000 Americans, including 15 service members, would be his first priority.

“We have to do everything we can to break the cycle of transmission and begin to turn this thing around,” he said. “I think DOD can add value to this effort, speed and scale, and if I am confirmed, one of the first things I will do is to take a look at how we’re contributing, and if there’s more we can do -- and I believe that there probably will be -- that we will lean into and help this effort a lot.”

But Austin said China poses the largest threat to U.S. national security. He endorsed efforts in recent years to focus U.S. military efforts on thwarting China’s growing influence in Asia and others global regions. The U.S military, he added, must modernize its weaponry to retain its combat edge over a quickly improving Chinese power.

“China really wants to be the preeminent power in the world in the not-too-distant future,” Austin said. “China, because of its desires, its world view, is a competitor that we have be sure to check their power.”

He committed to a whole-of-government approach to China, telling senators that the military’s role is to provide “a credible deterrent to China, so that it will think twice before it decides to take actions against the United States of America.”

During the more than three-hour hearing, Austin also committed to ending the Trump-ordered ban on transgender men and women serving in the military, which Biden has said is among his top priorities for the Pentagon.

“I support the president-elect’s plan to overturn the ban,” he said. “I truly believe … that if you are fit and you are qualified to serve, and you can maintain the standards, you should be allowed to serve.”

He said he would also revisit a number of other issues facing the Pentagon, including Trump’s plans to remove thousands of troops from Germany, and the U.S. plans to scale down forces in Afghanistan.

His hearing Tuesday came after civil-military relations experts last week testified to the same Senate committee about the issues in confirming a second recently retired general in just four years.

The experts did not provide their advice to the senators. They said confirming Austin would not destroy the principle of civilian control of the military, but it could begin to set a bad precedent so closely after the Mattis waiver.

“Choosing a recently retired general officer and arguing that he is uniquely qualified to meet the current challenges furthers the narrative that military officers are better at things and more reliable or trustworthy than civil servants or other civilians,” said Lindsay Cohn, an associate professor at the U.S. Naval War College whose research has focused on civil-military relations issues. “This is hugely problematic at a time when one of the biggest challenges facing the country is the need to restore trust and faith in the political system. Implying that only a military officer can do this job at this time is counter-productive to that goal.”

But she added presidents typically are entitled to the military leaders they want.

“It is the choice that the president-elect has made, and that has put you in the position of determining whether the balance is good or bad,” she said. “I do not envy you.”

Among those who have publicly voiced support for Austin’s confirmation are three former defense secretaries -- Leon Panetta, Chuck Hagel, and William Perry.

Panetta, who served as former President Barack Obama’s second Pentagon chief, testified Tuesday in support of Austin, with whom he said he worked closely while serving in that administration.

The former defense leader said Austin’s accomplishments in and out of uniform “were without peer,” and his selection would signal to adversaries that Biden was serious of ensuring the United States would “remain the strongest and most resilient democracy the world has ever known.”

“I've spoken to Lloyd, and there is no doubt in my mind that he will uphold the principle of civilian control, and, frankly, the best military officers that I had the honor to serve with are those who understand the importance of civilian control, and Lloyd was one of those,” Panetta said. “Mr. Chairman and members of the committee, I believe that Lloyd Austin is the right person at the right time — the man that we need, at this moment, to lead the Department of Defense.”