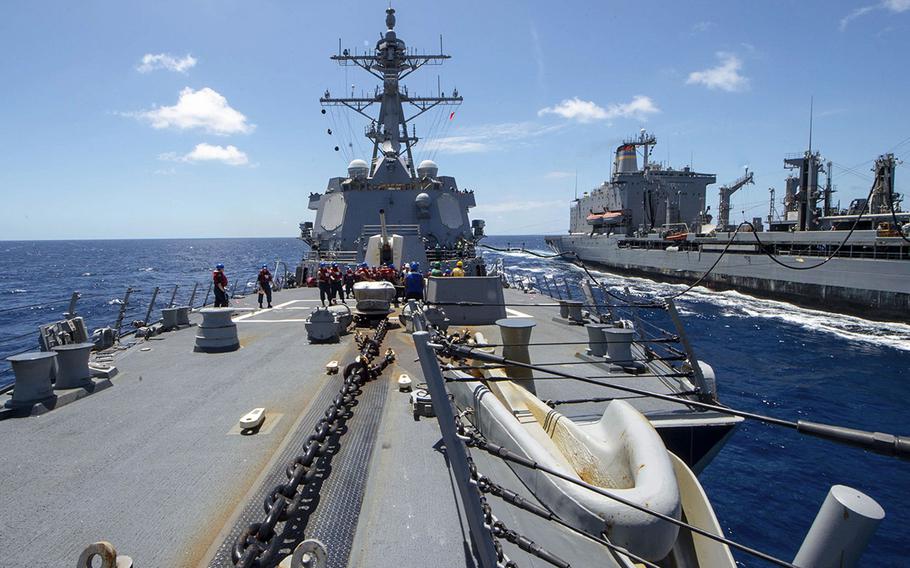 WASHINGTON — At least 18 sailors aboard the USS Kidd have tested positive for the coronavirus, Pentagon officials said Friday in announcing the Navy’s second outbreak aboard a deployed warship.

One sailor aboard the guided-missile destroyer was evacuated from the ship Thursday after developing symptoms consistent with the coronavirus and later tested positive at a medical treatment facility in San Antonio, said Jonathan Hoffman, the chief spokesman for the Pentagon. That sailor was stable Friday and receiving medical attention, the Navy said in a statement.

The Navy on Friday rushed an eight-person medical evaluation team to the destroyer, which is operating as part of a counternarcotics mission in waters under U.S. Southern Command’s responsibility, the Navy said. The ship will be sent to an undisclosed port where its crew will be offloaded and isolated, and the ship would be cleaned.

“We are taking every precaution to ensure we identify, isolate, and prevent any further spread onboard the ship,” said Rear Adm. Don Gabrielson, commander U.S. Naval Forces Southern Command and U.S. 4th Fleet. “Our medical team continues coordinating with the ship and our focus is the safety and well-being of every sailor.”

Hoffman said Friday that the Navy had learned a great deal from the military’s largest coronavirus outbreak aboard the aircraft carrier USS Theodore Roosevelt, where 840 sailors had contracted the illness in the roughly one month since the first cases of the virus on the ship were reported. The outbreak forced the Navy to dock the Roosevelt off Guam’s coast and offload more than 4,000 sailors who remain isolated in Navy facilities and hotels on the island.

The Navy has launched two investigations into that ship’s outbreak. The first, which Hoffman said Defense Secretary Mark Esper will be briefed about Friday afternoon, studied the service’s controversial handling of the outbreak, which cost the ship’s commander his job and later led to the ouster of the acting Navy secretary who removed him. The second study by Navy health officials and the Centers for Disease Control and Prevention is meant to scientifically evaluate the virus’ spread aboard the ship, where more than half of the crew members who contracted the illness never displayed any symptoms.

The lessons learned from that outbreak were already being implemented on the Kidd, where medical teams were working on contact tracing and other efforts to thwart a massive spread on the ship, Hoffman said Friday. Guided-missile destroyers crews are typically about 330 sailors, while the Roosevelt’s crew includes almost 5,000.

“The good news is that because of the fact we’ve seen outbreaks on some of the naval vessels in the past … I think there is a high level of attention to the issue from the Navy,” Hoffman said at a news briefing from the Pentagon. “I think they have procedures in place and they have activated them” on the Kidd.

Another 26 Navy ships that are in port currently reported cases of coronavirus among their crews, a Navy official who spoke on the condition of anonymity said Wednesday. The official would not say which ships had cases of the virus or how many sailors were infected, only that it was small numbers.

The Navy is the hardest hit of the U.S. military services by the pandemic. The service reported 1,445 total cases as of Friday morning.

The Roosevelt outbreak accounts for more than 21% of the 3,919 cases of coronavirus reported by Friday among the U.S. military worldwide. One sailor, 41-year-old Chief Petty Officer Charles Robert Thacker Jr., died of complications after contracting the virus aboard the Roosevelt.

As it did with the Roosevelt’s crew, the Navy intends to remove the majority of the Kidd’s crew from the ship and test the entire crew for the virus, the service said in its statement. Officials did not indicate on Friday how long that process was expected to take. The Navy declined to provide additional comment beyond its statement.

However, the officials did say they expected the number of positive cases aboard the Kidd to increase in the coming days.