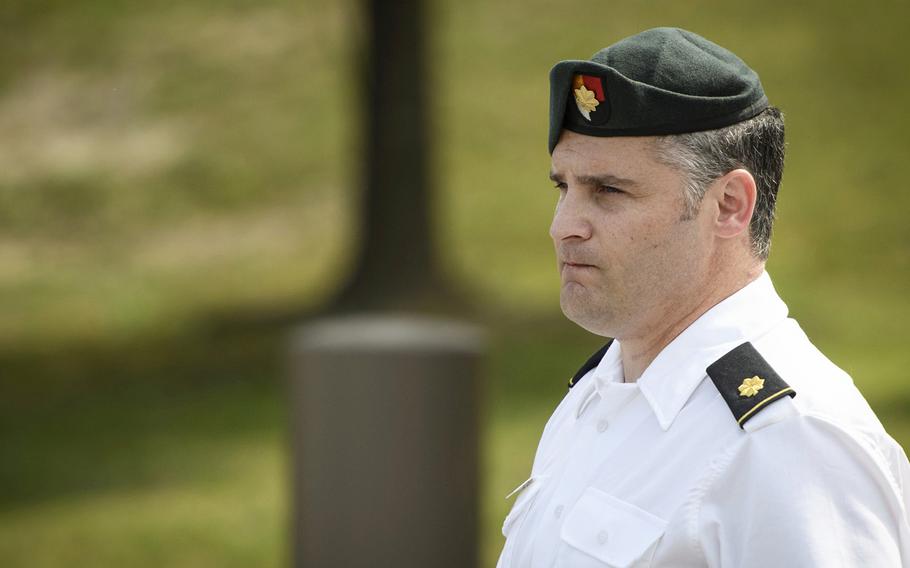 Maj. Mathew Golsteyn, a former Army Special Forces soldier, leaves the Fort Bragg, N.C. courtroom facility after an arraignment hearing on Thursday, June 27, 2019. Golsteyn entered a plea of not guilty in the killing of an unarmed Afghan national in 2010. (Andrew Craft, The Fayetteville Observer/AP)

The Army will not return a valor medal or the Special Forces tab that it stripped from former Maj. Mathew Golsteyn, a retired Green Beret officer pardoned by former President Donald Trump before he faced a court-martial on a murder charge, a service official said Thursday.

An Army review board in June denied an appeal filed by Golsteyn after his November 2019 pardon seeking the reinstatement of his Special Forces tab and the issuance of the Distinguished Service Cross that he was once approved to receive but was never awarded, service officials said. The Army declined to say why its decision was not made public until Wednesday, when USA Today first reported it, citing documents the newspaper obtained.

In 2014, Golsteyn was stripped of his Special Forces tab and the Silver Star that he was awarded in 2011, which later that year had been approved for an upgrade to the Distinguished Service Cross, the nation’s second highest award for battlefield valor. Top Army officials stripped the awards from Golsteyn as the service probed his admitted killing of an unarmed Afghan man while the Green Beret was deployed to Marjah in 2010. The Army charged Golsteyn in 2018 with a single count of murder in the man's death, but he has long maintained the act was justified in wartime, claiming the man was a Taliban bombmaker responsible for the deaths of troops under his command.

Lt. Col. Gabriel Ramirez, an Army spokesman, confirmed the Army Board for Correction of Military Records decision to deny Golsteyn’s appeal, but he declined to provide further information about the case, citing “privacy laws.”

The former Green Beret issued his appeal to the board seeking the return of his Special Forces tab, the valor medal and the clearance of wrongdoing in his official record, shortly after Trump issued his pardon and called Golsteyn a "U.S. military hero."

Army officials at the time said they would review the case.

Golsteyn’s lawyer, Philip Stackhouse, said at the time that he expected the Army to reinstate the awards and Trump had told Golsteyn that he would receive the honors that he was stripped of “as though this never happened.”

In a statement to USA Today, Golsteyn said the Army did not make him aware of the board’s decision until after Trump had left the White House.

"Clearly, we have seen military departments obey the direction of the commander in chief in other cases and, inexplicably, the Army defied the president," Golsteyn said in the statement. "It shouldn't be a surprise the findings of the Army board were released in November 2020 and not mailed to me for two more months, after President Trump left office, so my case could languish in the quagmire of presidential transition."

The newspaper reported the board’s decision was based in part on a Justice Department letter, indicating Trump’s pardon did not ultimately clear Golsteyn of wrongdoing.

The "presidential pardon is a sign of forgiveness and 'does not indicate innocence,'” the board wrote in its decision, according to USA Today.