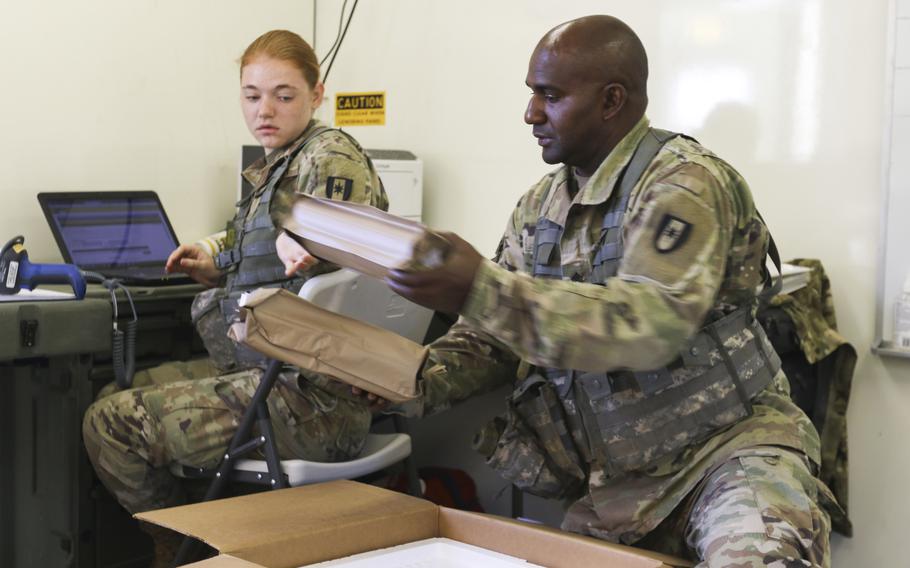 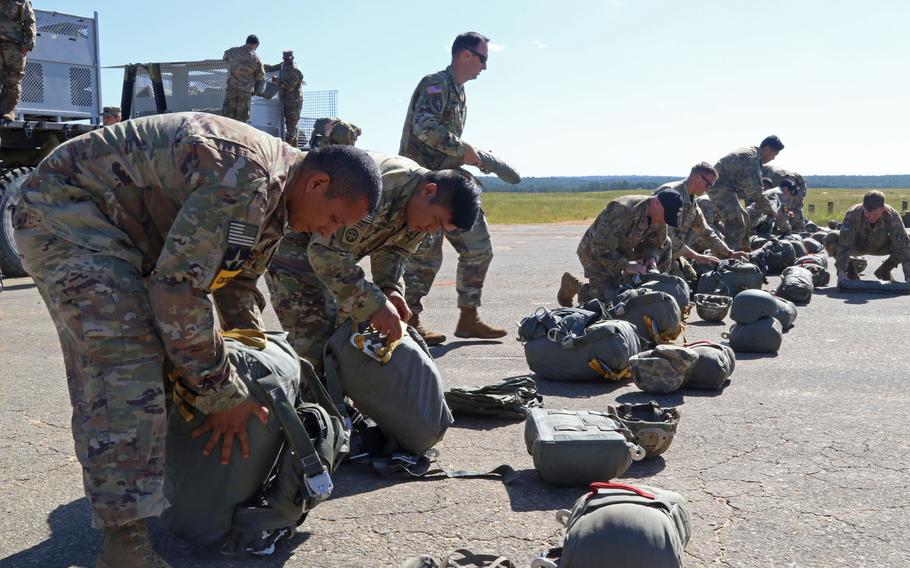 Fort Bragg Soldiers prepare their parachutes so they can jump with freeze-dried plasma at Fort Bragg N.C., Sept. 19, 2019. In order to test the durability of the plasma packaging, soldiers jumped to collect data for possible future use on the battlefield. (Brian Micheliche/U.S. Army) The Army is testing airdrops of freeze-dried plasma as a way of getting it closer to the battlefield to help improve the survival rate for wounded soldiers, it said in a statement released this week.

Soldiers from the Fort Bragg, N.C.-based 432nd Blood Support Detachment jumped out of a CH-47 Chinook with rehydrated, freeze-dried plasma packed in their ruck sacks, said the statement released Monday.

This delivery method, which was deemed infeasible with other blood products, could help reduce loss of life on the battlefield, where around 40% of combat deaths are caused by hemorrhaging, said the statement, citing the service’s Medical Research and Materiel Command out of Fort Detrick, Md.

“Tourniquets helped in enhancing survivability for our warfighters. But it’s blood that keeps them alive,” the statement quoted Col. Roberto E. Marin, material systems branch chief with the Army Medical Department Board, as saying.

A light yellow liquid containing blood’s clotting factors, plasma transports white blood cells, red blood cells and platelets through the body, along with water, salts, enzymes, antibodies and key proteins. Freeze-drying plasma changes it from a liquid to a powder, which makes it possible to store it at room temperature, and easier to package it in non-breakable holders, which might be rugged enough to drop from the air.

Currently, there’s no method to supply front line troops with blood products already in wide use elsewhere because of how they’re packaged and stored, officials said.

Fresh frozen blood comes in glass tubes that could break in an airdrop or parachute jump, and must be kept at cold temperatures. That limits storage options to “role 2” medical facilities, which are somewhat removed from the battlefield, the medical research command said.

Frozen blood also takes around 30 minutes to thaw before it can be used in surgeries, said Capt. Robert Crochet, a primary medical test officer with the AMEDD Board, who oversaw the Chinook jump.

Freeze-dried plasma, on the other hand, “takes roughly 1-6 minutes to rehydrate and become ready to administer to the casualty,” Crochet said.

“Those (saved) minutes can be the difference in life or death.”

The U.S. used freeze-dried plasma back in World War II but stopped after it was linked to hepatitis outbreaks, the military and medical researchers have said.

European allies developed safer methods to freeze-dry plasma and have used the product for decades, including to treat U.S. Special Forces casualties in Afghanistan, wrote the authors of a peer-reviewed paper published in the medical journal Surgery six years ago.

A few years before that, in 2010, when Adm. William H. McRaven was head of U.S. Special Operations Command, he began pressing for freeze-dried plasma to be made available to U.S. commandos, the Army has said.

But because there was no American-made product with Food and Drug Administration approval, SOCOM had to turn to France for its supply.

Special operations troops have been supplied with hundreds of kits containing the French product since 2012, and it was used by Green Berets and other special ops teams at least 24 times by 2017, SOCOM told the AP two years ago.

After some members of Congress sought to expedite the process of getting it onto the battlefield, the FDA granted the Defense Department permission last year to use freeze-dried plasma produced by France’s Centre de Transfusion Sanguine des Armees to treat uncontrolled hemorrhaging from combat wounds. The product was not approved for wider use in the U.S.

Meanwhile, Pennsylvania-based Teleflex Inc. has partnered with the military to try to get FDA approval for a freeze-dried plasma product by 2020.

The Teleflex product appears to be the one being tested last week by the Army’s Medical Materiel Development Activity, which develops products designed to protect and preserve the lives of warfighters. It comes in ready-to-use bags, stored in a protective, hard-plastic sheath alongside a bag of sterile water that’s used to rehydrate the blood component for injection, the Army said.

Officials did not respond to an inquiry about the producer of the freeze-dried plasma used in the parachute jump, but Army photos show a Teleflex product labeled as EZPlaz.