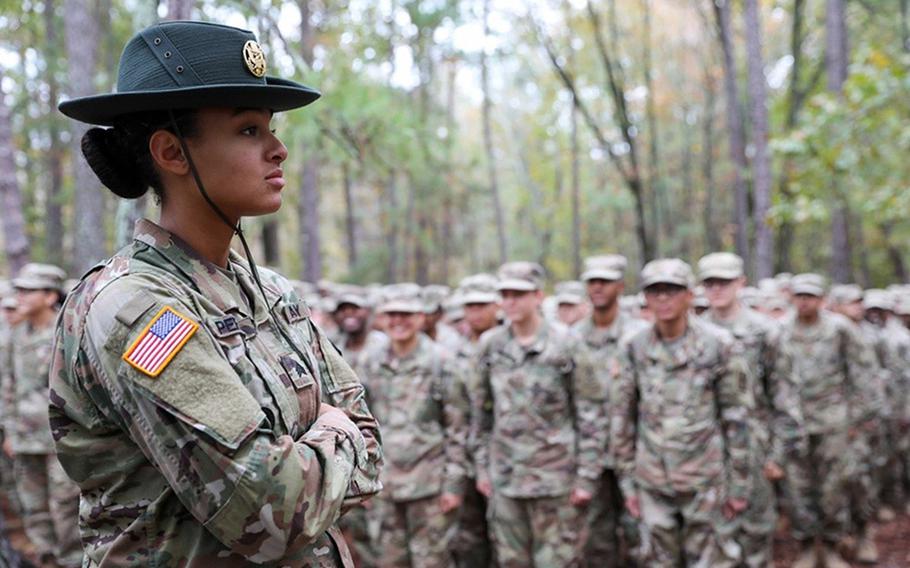 Sgt. Alycia Perkins, a drill sergeant, watches over basic combat training recruits at Fort Jackson, S.C., in 2019. The Army is now testing all recruits for sickle cell trait and plans to extend the tests to include all soldiers within the next year. (Michelle Lunato/U.S. Army)

Sgt. Alycia Perkins, a drill sergeant, watches over basic combat training recruits at Fort Jackson, S.C., in 2019. The Army is now testing all recruits for sickle cell trait and plans to extend the tests to include all soldiers within the next year. (Michelle Lunato/U.S. Army) 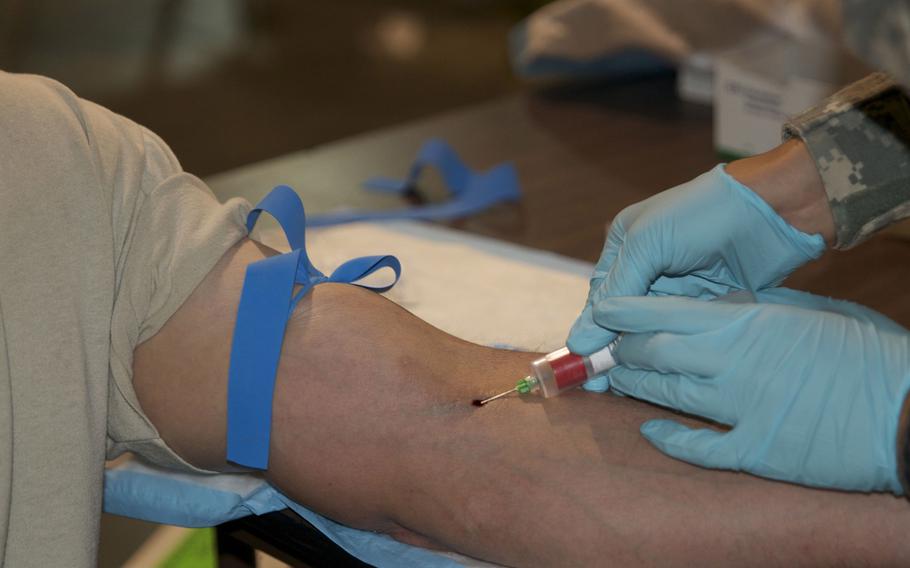 A combat medic with the California National Guard's Northern Medical Detachment, draws blood from a soldier in Fairford, Calif., in 2013. The Army added sickle cell trait to the conditions it tests recruits for in November 2020, following a spate of military deaths that were blamed on the hereditary blood disorder. (James Wilton/U.S. Army National Guard)

GRAFENWOEHR, Germany — The Army has begun testing recruits for sickle cell trait, a hereditary blood condition that has been implicated in the deaths of several service members during physical training, it said in a statement this week.

Blood draws that test for a number of conditions and are done as part of recruits’ initial screening exam have included SCT since the beginning of November, Maj. Sean Donohue, a command surgeon with the U.S. Army Training and Doctrine Command, said in the statement.

Having SCT does not disqualify recruits from service, he said. The tests were added to allow the Army to know who has the blood condition so they can be provided the care and support they need, the statement said.

SCT was added to the blood panels after the trait was implicated in multiple military deaths in recent years, often during training runs.

Most people with SCT do not have any symptoms of the more serious sickle cell disease and lead normal lives, according to the Centers for Disease Control and Prevention. But having the trait can increase the likelihood of muscle breakdown and potentially deadly heat stroke during intense exercise, such as military training, especially in extreme heat or cold, or at altitude, the CDC says.

Discovering early on in a soldier’s career that they have the trait could help officials better distinguish “the difference between someone who may look like they have a heat-related injury from someone who has [SCT],” Donohue said.

About 2% of Army recruits have been found to have SCT since the service began testing for the condition in early November, he said. That’s roughly the same SCT prevalence as in the general population, according to the CDC.

SCT and full-blown sickle cell disease are far more common among Black people but can affect all races and ethnicities, the CDC says.

Army recruits whose blood tests show they have SCT are referred to a health care provider and receive counseling on the condition, Donohue said in the statement.

In addition to screening soldiers, the Army is educating drill sergeants “on what exertional collapse related to sickle cell (trait) looks like,” Donohue said.

Screening for the trait will be expanded beyond recruits to include all soldiers within a year, the statement said.