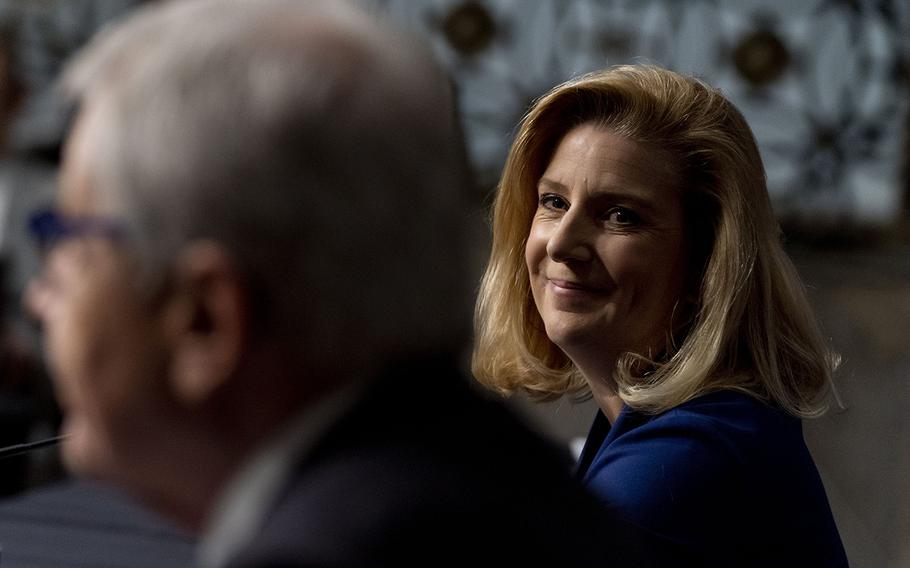 Nominee to be Secretary of the Army Christine Wormuth smiles as former Secretary of Defense Chuck Hagel, left, introduces her during a Senate Armed Services Committee nomination hearing on Capitol Hill in Washington, Thursday, May 13, 2021. (Andrew Harnik/AP)

WASHINGTON — Substandard military housing, an increased reliance on the National Guard and the service’s fitness test are all readiness and retention issues that President Joe Biden’s nominee to be Army secretary wants to make a priority.

“I intend to prioritize the whole range of people issues. To ensure our soldiers and civilians have the best quality of life possible, I will strive to continue improving our Army housing, health care, child care and spouse employment opportunity,” Christine Wormuth said Thursday at her confirmation hearing in front of Senate Armed Services Committee members.

Wormuth drew praise throughout the hearing from Democratic and Republican lawmakers for her long track record of service. She would be the first female to hold the position and is not expected to face any challenges when it comes time for senators to vote.

She also fielded questions on the National Guard from one longtime advocate of expanding benefits for members who have been deployed at historically high levels in the past year.

Guard missions have ranged from responding to civil disturbances and extreme-weather events, administering tests and vaccines amid the coronavirus pandemic and defending the Capitol after the Jan. 6 attack.

“I am of course concerned about … unreasonable or unhelpful demands on the National Guard, as well as the reserves,” Wormuth said.

With Gen. Daniel Hokanson, chief of the National Guard Bureau, Wormuth said she wants to look at “how that strain is manifesting” and whether there is “undue stress on the force.”

“If we are overly taxing the Guard or the reserves that can be damaging for recruiting and retention ... I think there are tools to help manage places where there's undue strain,” she said.

Shaheen asked Wormuth whether she would consider reexamining health care and education benefits for National Guard members who face barriers to accessing benefits when going on and off deployment orders.

“We’ve done a tremendous amount in recent years to try to shrink the number of different duty statuses just to sort of help us with that, and I would be happy to look into the issues that you've raised,” Wormuth said.

Ongoing problems with housing for military families — and the lack of progress to address the issue — was also identified as a factor that is causing service members to leave the armed forces.

Sen. Elizabeth Warren, D-Mass., said military families have shared “countless” stories with her in the last few years about the deplorable housing conditions, including reports of “substandard, rotting houses, filled with lead paint and black mold.”

In what the senator described as a widespread issue, Warren said “my office is still hearing from military spouses that the problem isn't getting any better. And that landlords are not following the rules that are supposed to protect tenants.”

“Yes, I do senator. I think it poses challenges for readiness and also for retention,” Wormuth said.

The Army undertook a reorganization to tackle the “very significant problems that it was having in housing,” primarily by making two commands — the Army Materiel Command and the Installation Management Command — responsible for overseeing the issue, she said.

Three-star officers and Installation Management Command also meet with representatives from private housing companies on a weekly basis to discuss the houses developed at particular installations. Installations have also been holding quarterly town halls with soldiers and their families to voice concerns.

“These have been good steps forward … I would want to continue to have that very regular focus and a lot of very close cooperation with the companies that are handling the privatized housing,” Wormuth said.

The nominee committed to hold landlords accountable to ensure they build and maintain quality housing for service members.

Still, Warren railed against the companies that the Defense Department has hired to manage the properties.

“They've escaped accountability by doctoring the numbers of sweeping complaints under the rug and raked in millions of dollars, taxpayer dollars, in the process,” the senator said.

Sen. Kirsten Gillibrand, D-N.Y., voiced concern over retention issues posed by the Army Combat Fitness Test — specifically for women who serve in roles such as military lawyers and medical and cyber-focused personnel.

Wormuth said she will be transparent with Gillibrand when it comes to sharing information and data on the ACFT, which was adjusted this year to account for male and female “biological differences.”

The implications of the test on the ability to retain women is a concern for Wormuth.

“We want to make sure that we're not indirectly penalizing anyone,” she said.

The Army’s recent move to allow women to do a plank, rather than a leg tuck as an event in the fitness test is a good example of adapting it in a helpful way, Wormuth said. The leg tuck, in which soldiers hang from a pull-up bar and tuck their knees up to their chins, has proved especially challenging for many soldiers.