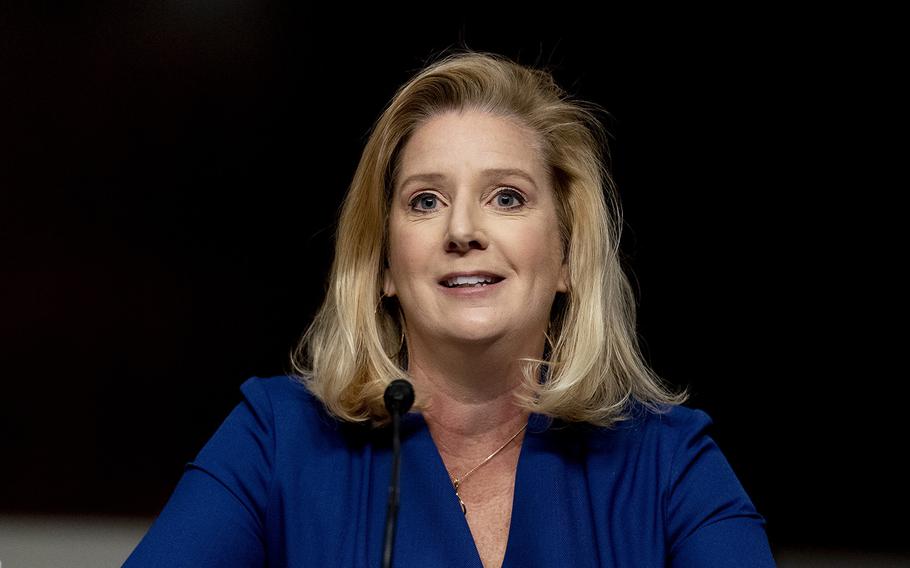 Nominee to be Secretary of the Army Christine Wormuth speaks during a Senate Armed Services Committee nomination hearing on Capitol Hill in Washington, Thursday, May 13, 2021. (Andrew Harnik/AP)

WASHINGTON — President Joe Biden’s nominee to be Army secretary said Thursday that she would focus on sexual assault prevention to combat sexual assault in the military’s largest branch by prioritizing hands-on training and a positive command climate.

“We need to put quite a bit of focus on prevention. Prevention programs, but also really pushing a positive command climate down to the lowest possible level,” Christine Wormuth told members of the Senate Armed Services Committee at her confirmation hearing.

Committee Chairman Jack Reed, D-R.I., said when he and ranking committee Republican Jim Inhofe of Oklahoma traveled to Fort Hood, Texas, they discovered the Army's Sexual Harassment/Assault Response and Prevention program, or SHARP program, was “basically nonexistent below the brigade level” and called it a “check-the-box” program.

“I would rather prevent the crime, than bring the accused to justice,” Reed said.

While the Army has made strides to improve prevention efforts, “I would want to look at what more could be done,” she said.

For Wormuth, prevention training goes beyond “PowerPoint slides.” She said she wants to get people involved in hands-on training through scenarios as well as bystander training, which would allow soldiers to recognize when to step in during a potential problem.

Wormuth would be the first female Army secretary in the service’s history, if confirmed. Under former defense secretaries Ash Carter and Chuck Hagel, who introduced Wormuth at the hearing, the nominee worked as the undersecretary of defense for policy from 2014 to 2016.

“Her extensive efforts working on suicide prevention, sexual assault, harassment and support to military families and veterans, and all quality-of-life issues to our military and their families were particularly impressive,” Hagel said in his opening remarks.

Wormuth would begin her tenure at a time when the Army is at the forefront of the conversation on how the military can improve its culture of retaliation and fear of reporting crimes of sexual assault and harassment.

An Army report released last month found Spc. Vanessa Guillen faced sexual harassment from a supervisor in the months before her disappearance and death at Fort Hood last year. Guillen’s family has said she was too afraid to bring the harassment to her leadership. Speaking at an event at Fort Bliss, Texas, in March, acting Army Secretary John Whitley said about 6,500 sexual assaults occurred in the Army last year but just more than half were reported.

Ensuring that junior enlisted soldiers between 17 and 24 feel safe, protected and are looking out for each other is key, Wormuth told senators Thursday, especially because the majority of victims of sexual assault in the Army are within that age group.

Sen. Kirsten Gillibrand, D-N.Y., asked the nominee how she will improve command climate in the wake of an independent review of Fort Hood that found a pervasive climate of abuse and sexual harassment.

Wormuth said after reading the review “cover to cover … I was extremely angry and frustrated. I think the commission's report makes plain that the Army has real issues when it comes to this topic and I think there's quite a bit of work to be done.”

The report made 70 recommendations, which Wormuth committed to fully implement across the Army, where applicable, and not just to Fort Hood.

“The Army has started to take some steps that I think will improve the command climate, such as sending those cohesion assessment teams out to other installations … but I think there’s more work to be done,” she said.

While the hearing took place, a bill spearheaded by Gillibrand that would overhaul how sexual assault cases are prosecuted in the military passed a key threshold in the Senate, according to the senator’s office.

The Military Justice Improvement and Increasing Prevention Act would remove prosecution authority from the chain of command for sexual-assault crimes and other felonies, and now the bill has 61 cosponsors needed for passage, Gillibrand’s office said.

The senators include 41 Democrats, 2 Independents, 18 Republicans, and the majority of the Senate Armed Services Committee members, according to the statement.

On that reform, Wormuth said she “look[s] forward to getting the results of the independent commission that [Defense Secretary Lloyd Austin] directed. I would be very interested to see what recommendations they make.”

An independent commission created by Austin in February was tasked with considering all options to combat sexual assault in the military.

The Associated Press reported last month that the commission recommended to Austin that the decision to prosecute service members for sexual assault be made outside of the chain of command.

Duckworth asked Wormuth if she pledges to incorporate the results of that review, which should be released later this year.

“I would be very interested if confirmed at looking at the results of their review of the SHARP program and seeing how we can strengthen it, in addition to what the Army has already undertaken in terms of a redesign, as a result of the Independent Review Commission,” she said.