The 25th Infantry Division’s Wolfhounds, whose soldiers defended a foothold on a Korean peninsula in 1950, are the inspiration for the Army’s football uniforms for this year’s Army-Navy game at West Point. (U.S. Army)

The 25th Infantry Division’s Wolfhounds, whose soldiers defended a foothold on a Korean peninsula in 1950, are the inspiration for the Army’s football uniforms for this year’s Army-Navy game at West Point. (U.S. Army) 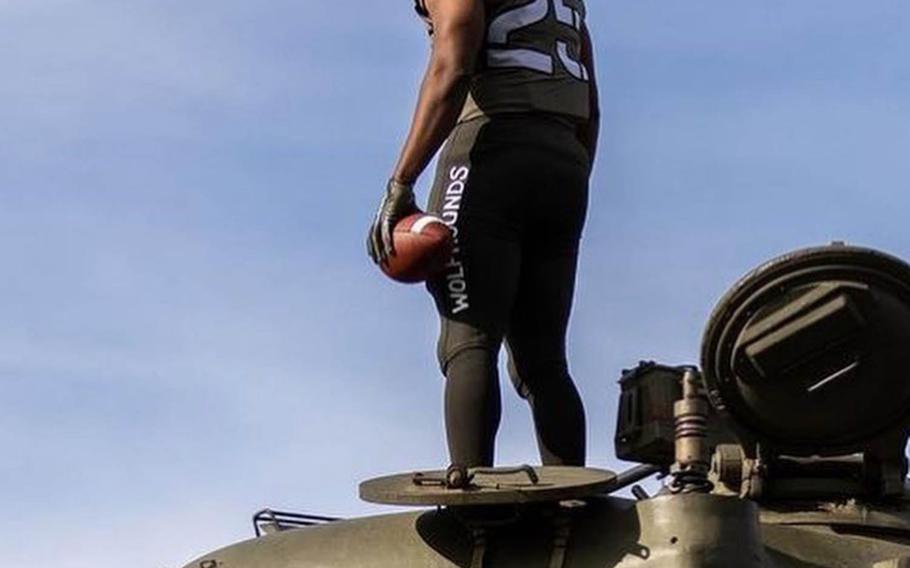 Players for the Army football team in this year’s Army-Navy match will wear uniforms inspired by soldiers of the Hawaii-based 25th Infantry Division. (U.S. Army)

FORT SHAFTER, Hawaii — The U.S. Army’s Hawaii-based “Tropic Lightning” 25th Infantry Division is serving as the inspiration for the uniforms to be worn next week during the Army-Navy football game.

The annual matchup will take place Dec. 12 at Michie Stadium, an outdoor arena at West Point in New York.

Army players’ uniforms will honor the division’s Korean War-era 27th Infantry Regiment, the Wolfhounds, which played a decisive role in repelling the initial massive assault by the North Korean People’s Army in 1950, according to promotional materials released Sunday by the Army.

Army helmets will sport the division’s distinctive insignia: a golden lightning bolt emblazoned upon a red taro leaf, dubbed by soldiers long ago as the “Electric Strawberry.”

The division was activated on Oahu shortly before Japan’s surprise attack on the island on Dec. 7, 1941. Its soldiers participated in the invasion of Luzon, Philippines, in January 1945 and were among the occupying forces in Japan after its surrender later that year.

On one shoulder of the uniform is a wolf head, symbol of the division’s Wolfhounds, whose soldiers were deployed from the tranquil Japan occupation to Korea when war broke out in June 1950.

The Wolfhounds were among the units defending the Pusan Perimeter and then pushed the enemy back toward the north, earning three Presidential Unit Citations during the conflict, which ended in 1953.

“The Wolfhounds have more Medal of Honor recipients than any other regiment going back to the Spanish-American War,” the Army said.

The uniforms carry a shoulder patch of an American flag from the early 1950s, which had only 48 stars before Hawaii and Alaska became states in 1959.

The uniform also features insignia from 10 units that have been subsets of the 25th, such as the Wolfhounds, 24th Infantry Regiment and the 5th Ranger Infantry Company. During the Army-Navy game, each player will sport one of those insignia upon his helmet.

The game venue of West Point, chosen in the wake of the coronavirus pandemic, is a significant departure from the longtime tradition of holding the game at neutral locations.

Not since 1943 has the Army-Navy game been held at the campus of either service’s academy, the Army said. It is taking place at West Point because the Army team is designated the “home team” on even-numbered years.

Over the 120 years the rivals have competed, about three-quarters of those games were played in Philadelphia, which is roughly equidistant between West Point and the Annapolis, Md., home of the Naval Academy, according to the website footballscoop.com.

Navy won the game last year after being bested by Army the previous three years.