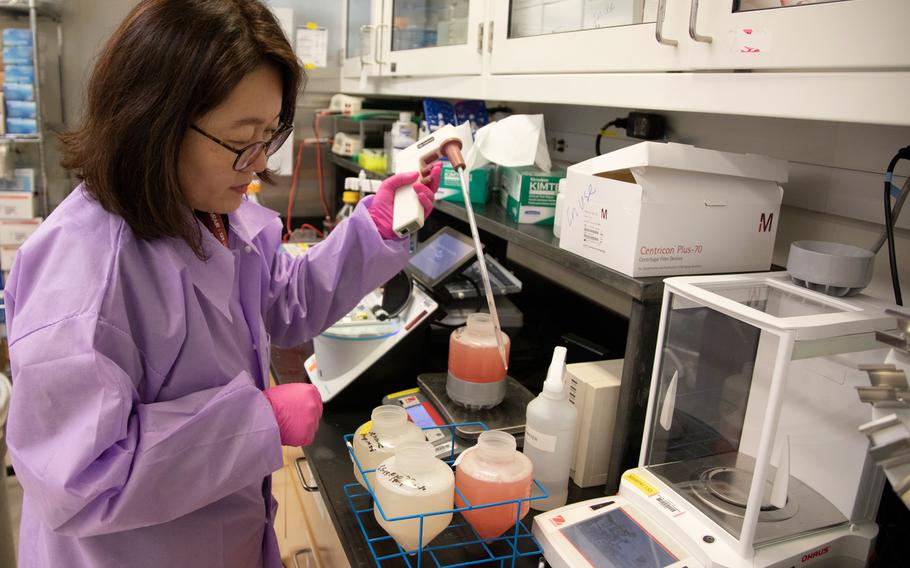 Misook Choe, a Laboratory Manager with the Emerging Infectious Disease branch at the Walter Reed Army Institute of Research, conducts studies in order to find a solution for the Coronavirus, March 3, 2020. The Emerging Infectious Diseases branch, established in 2018, has the explicit mission to survey, anticipate and counter the mounting threat of emerging infectious diseases of key importance to U.S. forces in the homeland and abroad. (Michael Walters/U.S. Army)

WASHINGTON — The Defense Department is ratcheting up its efforts against the coronavirus as Pentagon officials devise a plan to combat an outbreak in the building and Army researchers work to develop a vaccine for the illness.

Army medical researchers said Thursday that they are working on testing and developing potential vaccines to combat the coronavirus, part of a joint effort with other research laboratories across the country.

The number of cases in the United States has reached more than 150 in 18 states, including at least two veterans — one in California and the other in Nevada. There have been 12 U.S. deaths as a result of the fast-spreading illness.

Worldwide, the virus has infected nearly 97,000 and killed more than 3,300 people. As of Thursday, two more military dependents in South Korea have been diagnosed with the coronavirus, rising the number of confirmed cases affiliated with U.S. Forces Korea to six, including one service member.

Defense Secretary Mark Esper told reporters earlier Thursday that the efforts underway in South Korea have been a good model for protecting people from the virus, such as teams wiping down surfaces and people changing social interactions.

He said next week he will receive a plan on how the Pentagon would carry out its own prevention and mitigation measures in the building in case an employee is diagnosed with the coronavirus. If there was an outbreak at the Pentagon, he said they are confident the department can continue to perform its functions.

“Our national military command center has the capability to go for weeks at a time if they have to be locked down inside the building if we have some type of outbreak,” Esper said.

Yet members of the U.S. Army Medical Research and Development Command and the Walter Reed Army Institute of Research are working on testing and developing two vaccines, or “candidates,” that could be used potentially to combat the coronavirus, officially named COVID-19. The team is working in coordination with the Vaccine Research Center at the National Institutes of Health.

The Army has received a sample of the coronavirus from the Centers for Disease Control and Prevention that was taken from an American patient in Washington state, Dr. Kayvon Modjarrad, the director of emerging infectious diseases at the Walter Reed Army Institute of Research, told reporters Thursday at the Pentagon. He spoke as part of a panel of Army medical experts and researchers about their efforts to develop a vaccine.

It is still expected to take 12 to 18 months before a vaccine is available to the general population.