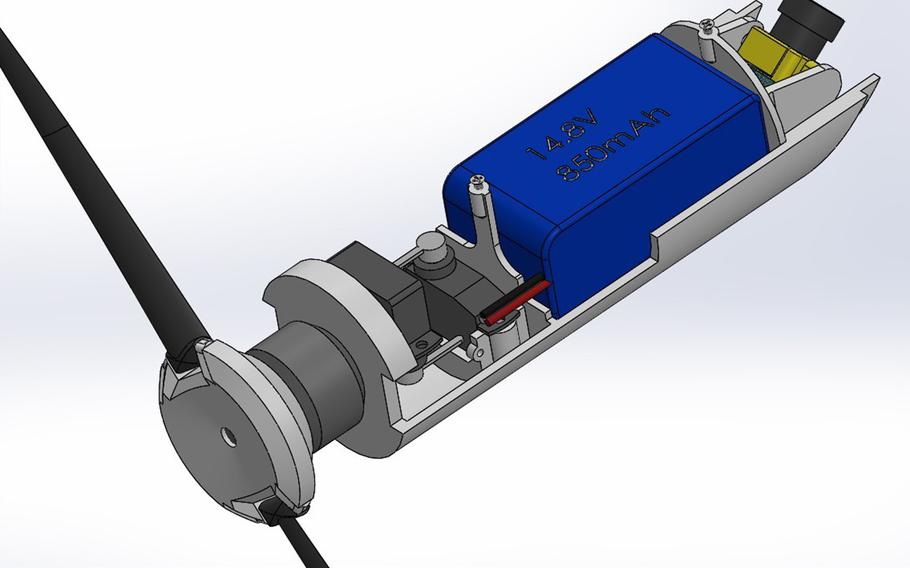 An illustration of one of the variants of the Army's Grenade Launched Unmanned Aerial System. (CCDC Army Research Laboratory)

WASHINGTON — The Army’s future front-line fighters could one day find a new use for their grenade-launchers — shooting tiny camera-drones into the sky to scope out unseen enemy threats.

Army Research Lab scientists at Aberdeen Proving Ground in Maryland are developing the micro-drones the same size as the Army’s 40 mm grenade, which are meant to be fired by the service’s standard M203 grenade launchers, service officials said Thursday. They have dubbed the new drones Grenade Launched Unmanned Aerial Systems, or GLUAS.

The drones could be lifesavers for infantrymen fighting on the frontlines in places such as eastern and northern Afghanistan where tall, jagged mountains often conceal the location of enemy fighters and their movements. Soldiers under attack from an unseen enemy could fire the GLUAS and almost instantly receive a “bird’s eye view” of the battlefield, said John Gerdes, a mechanical engineer working on the project.

“This device provides an autonomy and intelligence platform to help soldiers perform useful missions while having a lookout from hundreds of feet in the air,” Gerdes said in an Army release.

It was not immediately clear Thursday when Army officials expected the drone project to be completed or when they might be ready for use in combat.

The Army is developing two versions of the GLUAS — one similar to a paraglider and the other designed like a helicopter that can hover, Gerdes said. Both are projected to fly up to 2,000 feet in the air for at least 90 minutes.

Because the drones are similar in size, weight and shape to the Army’s standard grenades, they should easily fit into the standard kit combat soldiers carry, he said.

Once launched, the drones spread their wings and their motor takes over allowing soldiers to control them using a joystick or other hand-held device, the service said. The camera sends a live video feed back to the soldiers on the ground from as far away as 2 kilometers.

Gerdes said he envisions adding GPS receivers to the drones, allowing soldiers to identify the exact location of objects or persons observed from the air.

The Army has a long history of using small drones to give its infantrymen and others on the front lines a safe view from the air. Last summer, an 82nd Airborne Division unit deployed to Afghanistan with tiny, helicopter-like drones called Black Hornets.

But Army officials said being able to launch the drones as a projectile would get them in the air quicker to find a threat as fast as possible.

“Basically, if there is something you want to look at, but you have no idea where it is yet, that’s where the drone comes in,” Gerdes said.

Gerdes and his partner Hao Kang, another mechanical engineer with the Army Research Lab, filed for a patent for the GLUAS drone design last month. The design could become a reality for soldiers in the future, or it could simply lead researchers to other innovations for the battlefield, the service said

“We’re here to develop innovative concepts for the warfighter’s needs, which generally means we bring the size and weight down of a device, and push up the range and lethality,” Gerdes said. “At ARL, we’re typically focused on the basic innovation and discovery aspects of research.”