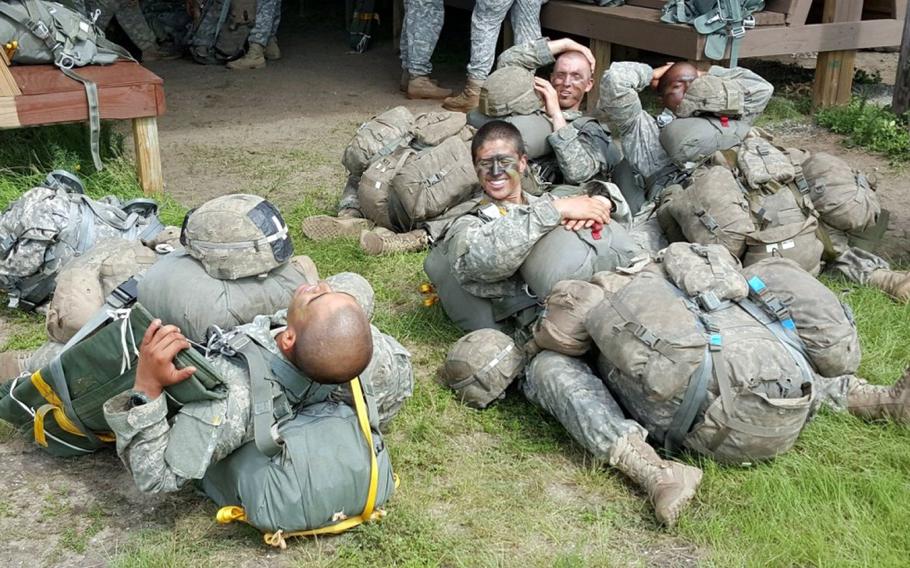 A female Ranger student shares a laugh with fellow soldiers while waiting for a C-130 ride Thursday, Aug. 6, ahead of an airborne parachute jump. (Dan Lamothe/The Washington Post)

A female Ranger student shares a laugh with fellow soldiers while waiting for a C-130 ride Thursday, Aug. 6, ahead of an airborne parachute jump. (Dan Lamothe/The Washington Post) 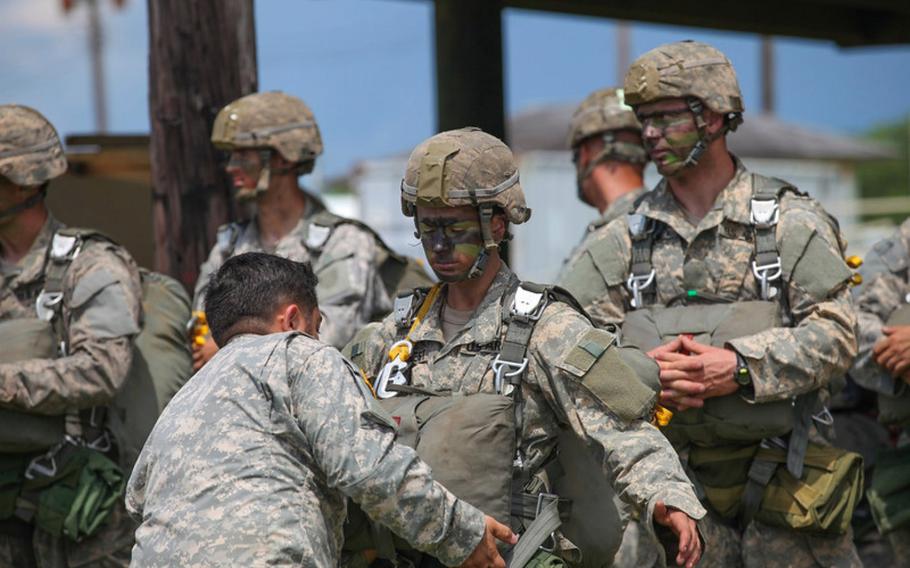 A Ranger instructor checks the equipment of a female student at Eglin Air Force Base before an airborne jump using parachutes. (Yvette Zabala-Garriga/U.S. Army)

WASHINGTON — They’ve endured four months of the Army’s most physically grueling and mentally taxing training, and on Friday the first two female soldiers in history will be awarded the coveted Ranger Tab.

The Army late Monday announced that the female soldiers, along with 94 of their male classmates, had successfully completed Ranger School, the Army’s premier leadership course conducted in three phases — at Fort Benning, Ga.; in the north Georgia mountains; and in the Florida swamps of Eglin Air Force Base. The Army has not identified the two female officers who will officially graduate Ranger School on Friday morning during a ceremony at Fort Benning’s Victory Pond.

Each year about 4,000 students begin Ranger School, but only about 1,600 graduate, according to Army data.

“Each Ranger School graduate has shown the physical and mental toughness to successfully lead organizations at any level,” he said. “This course has proven that every soldier, regardless of gender, can achieve his or her full potential.”

In April, 19 women and 165 men became the Army’s first gender-integrated Ranger class, part of the Army’s efforts to study how the service could effectively integrate women into traditionally male-only combat-arms jobs. A 2013 Pentagon directive mandated that each service open all jobs to qualified women by the beginning of 2016 or provide an official waiver detailing why certain positions should not be opened to female troops. The services have until Sept. 30 to provide those reports to Defense Secretary Ash Carter.

It remains unclear whether the Army plans to open its remaining closed positions — primarily in the infantry, armor and Special Forces fields — to women. McHugh in his Monday statement indicated he believed that soldiers should be allowed to serve regardless of gender.

“We owe soldiers the opportunity to serve successfully in any position where they are qualified and capable, and we continue to look for ways to select, train and retain the best soldiers to meet our nation’s needs,” McHugh said.