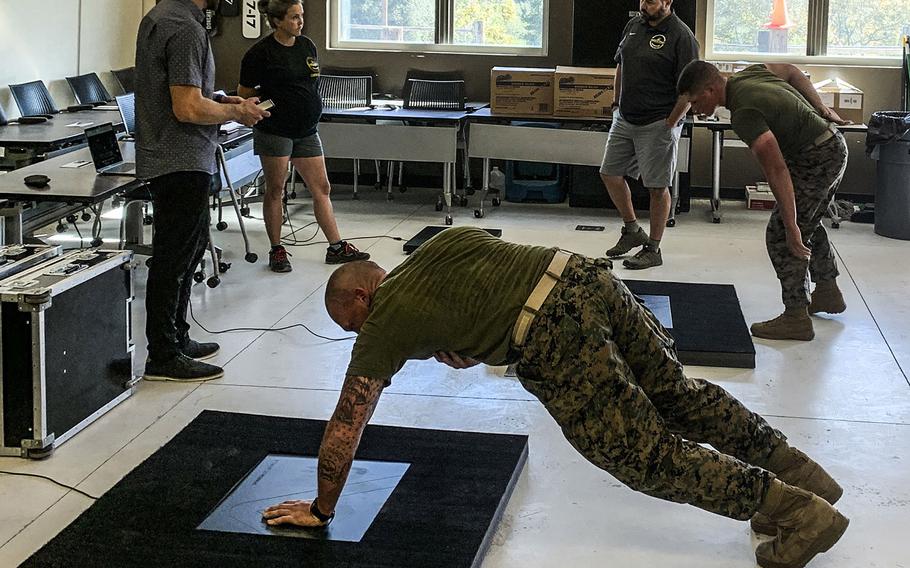 Marines at the School of Infantry at Camp Pendleton, Calif., use Sparta Science’s force plate system in this undated photo. (Sparta Science)

WASHINGTON — Looking to solve the costly training injuries that have long-plagued its soldiers, the Army is set to test technology popular with major sports programs to help the service build individualized approaches to its troops’ fitness workouts.

The technology, force plates outfitted with machine learning software, will be tested during the coming months as part of a health and fitness pilot program that the Army is running with new officers training at Fort Sill, Okla., service officials said. The Army hopes the technology will fit into its new Holistic Health and Fitness — or H2F — program that it rolled out last month in an effort partially aimed at reducing the trove of some 58,000 soldiers considered nondeployable, most often for training-related injuries.

Soldiers will conduct a series of movements on top of the force plates — 30-pound rectangular metal panels that look like oversized bathroom scales — from which the software can predict specific injury vulnerabilities and help fitness experts tailor training programs to reduce those risks, said Dr. Phil Wagner, the founder and CEO of Sparta Science, the company supplying the technology for the Fort Sill pilot. The key factor is the massive accumulation of data the Silicon Valley, Calif., company has collected from more than 2 million scans via its force plates, Wagner said.

“The system gets better with more data that comes in — the insights become more accurate and more specific,” he said. “And then the machine learning is able to identify patterns in individuals through comparison with others. It can say you just did your balance [assessment on the force plate] and it’s immediately comparing against all these data points it already has, and it can tell you, ‘You need to do X and Y to address this issue you have.’”

The methods have been successful with athletes, according to Wagner.

Sparta’s client list includes teams in Major League Baseball, the National Football League and the National Basketball Association and major Division I collegiate programs, including Clemson University, the defending college football champion. For the past four years, Sparta has also worked with the NFL, collecting data during its annual pre-draft scouting combine to help teams assess the health of potential draft picks.

And that is essentially what the Army wants to do. The thought is, if it can assess a service member’s vulnerability to injury — especially in key areas that commonly break down in the military such as knees, ankles and backs — it can avoid some of those nagging musculoskeletal problems that keep troops sidelined and cost the Army an estimated $575 million to treat each year.

The technology is not new to the military. Sparta has worked with U.S. Special Operations Command since at least 2016, and it has recently begun other pilot programs, including with the Marine Corps’ Training and Education Command. The Marines agreed to a five-year contract with Sparta this year to purchase an indefinite number of the force plate systems for approximately $64,000 each, according to contract documents.

The Corps’ is already using the technology in initial entrance training programs, including Recruit Training and Officer Candidate School, “in a limited fashion in order to assess” its usefulness, said Marine Capt. Sam Stephenson, a spokesman for the command.

The technology has also captured the attention of some lawmakers. The House-passed version of the 2021 National Defense Authorization Act, which sets annual policy and spending priorities for the Pentagon, would mandate the Defense Department study force plate machine learning’s applications for troops. If the language is adopted in the final version of the NDAA, which must still be reconciled with the Senate version, it would require the defense secretary to submit a report on the technology to Congress by September.

“These technologies could provide accurate, actionable insights regarding the physical condition of each servicemember and customized fitness programs for each service member to help minimize injuries during combat, thereby increasing the medical readiness and the military lifecycle of service members,” the House version of the 2021 NDAA reads. “The [House Armed Services] Committee notes that there have been some elements of the military services that have previously used this technology to increase readiness, decrease injuries and avoid a significant amount of expenses related to unnecessary injuries.”

For soldiers, the process is simple, Wagner said.

A person performs a series of movements on the force plate, including balancing on each foot, a series of jumps, and planks. Scans take less than five minutes to collect the data, which can predict a person’s injury risk throughout their entire body, Wagner said.

Athletic programs that have adopted Sparta’s technology often scan their athletes at least once a week to document progress in their training to prevent injury or assess an injured person’s rehabilitation progress, Wagner said. His hope is the Army and other military services consider a similar approach.

Retired Army Maj. Gen. Malcolm Frost envisions the Army adopting the use of the force plates throughout all of its formations as low as the company level as part of its new H2F program, which he helped craft before retiring last year as the commander of the Army’s Center for Initial Military Training. The Fort Eustis, Va.-based CIMT is the service’s lead for health and fitness matters and, among other things, led the way in the creation of the new Army Combat Fitness Test.

Frost, who now works as a strategic adviser for Sparta Science, said he was aware of the company and its force plates before leaving the Army but only became intimately familiar with the technology after retiring. He said he believes it could help soldiers prolong their careers, if they so choose, or at least live more comfortably with less physical issues after serving.

Frost said he believes the force plates could be integrated directly into the Army’s H2F program, aiding the Army’s new teams of health and fitness experts being added to all of its brigades. More important would be ensuring new soldiers coming into the service begin receiving scans as early as possible, perhaps even at the Military Entrance Processing Stations from where recruits ship to basic training, he said.

“This needs to be done throughout the lifespan of a soldier,” Frost said. “Every single recruit should have to go through this and we can start to set a baseline and going on we track them in basic training and then as they progress.”

He said he believes if the technology existed some three decades ago when he entered the Army it could have helped the Army shape its approach to physical training and save him from at least some of the nine surgeries that he has undergone after years of the strains from serving in the infantry.

“We have been, for me for 30 years [in the Army], doing physical fitness the wrong way and training my body the wrong way for the tasks that I needed to do as an infantryman,” Frost said. “I've had back injuries and shoulder injuries and leg injuries that has affected me for life in my readiness. And had I been conducting fitness the right way up front than I would have been at a much, much better place.”