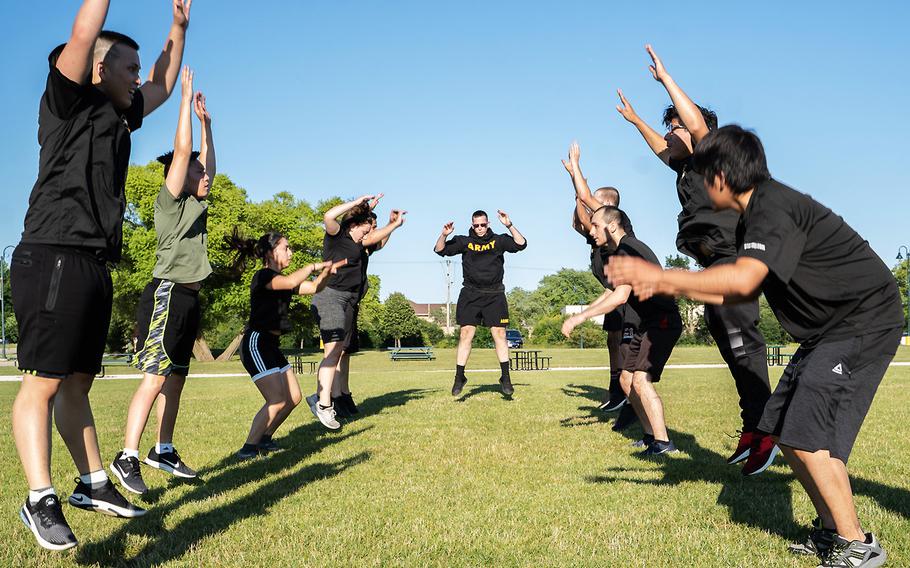 Staff Sgt. Dustin Wells, a recruiter with the Greenfield Recruiting Center, Milwaukee Company, leads future soldiers in physical exercise on Aug. 6, 2020. Recruiters help train those who are preparing to ship off to basic training by introducing them to Army customs and traditions like physical fitness. (Joshua P. Morris/U.S. Army)

Lt. Gen. Gary Brito, the Army’s personnel chief, credited stronger-than-anticipated retention numbers and an adaptable recruiting force amid the pandemic with ensuring the service reached it Congress-mandated target of 485,383 active-duty soldiers by Sept. 30, the end of the fiscal year. Brito anticipated the active force would grow by another 1,000 to 1,500 soldiers in fiscal year 2021, but he and other top Army officials also said they hoped those increases would include more women and minorities next year.

“The uniformed and civilian leadership of our Army are taking these issues very seriously,” Brito told reporters Friday in a telephone news briefing. “We’re looking at all aspects of the [diversity] problem … toward making it better for future soldiers and the leaders who will represent [the Army] in the near-term and the out years.”

The drive for more diversity within the Army’s recruits comes as the service — and the military overall — has taken steps in recent months to address issues that top officials have said contributed to minorities and women rarely reaching the service’s highest ranks. The Army, for example, has banned photographs from promotions packets, and it is working toward removing all further identifying information from them that could indicate race, ethnicity or gender.

In fiscal year 2020, the service saw some incremental improvements in the diversity among new enlistees. Non-whites made up about 47% of the 62,150 recruits the Army shipped to basic training that year, up from about 45% in 2018 and 2019, said Maj. Gen. Kevin Vereen, the chief of Army Recruiting Command. About 18% of new recruits were female, also a slight improvement, he said.

“We're continuing to focus on assessing a diverse force that is representative of our nation — the nation that we serve,” Vereen said, adding one of his goals toward increasing female enlistments is to bring more women into the Army’s recruiting force.

The Army saw a slight increase in the numbers of new minority officers, as well. Maj. Gen. John Evans, leader of Army Cadet Command, did not have a precise percentage of the non-white portion of the 6,090 new lieutenants commissioned into the Army in fiscal year 2020. But he anticipated that percentage was somewhat higher than the 33% of non-white officers commissioned into the service in fiscal year 2019.

Evans said he is especially focused on bringing new minority and female officers into front-line combat arms roles, which have been long dominated by white men. Officers who begin their careers in those fields— such as infantry, armor and field artillery — have long produced the bulk of the Army's three- and four-star generals.

"We're encouraging much more diversity in those traditional combat arms branches," Evans said. “That really is [about] the desire to ensure that we have people … 25, 30 years down the road who are going to be our senior leaders — making sure we have got great diversity there, as well."

The ongoing pandemic forced the Army to alter its approaches to recruiting and retention. Brito said the economic downturn as coronavirus spread across the country in the spring along with new, short-term reenlistment options likely contributed to more soldiers choosing to stay in the Army than in recent years.

More than 1,600 soldiers signed three- to 11-month contract extensions allowing them to stay in the service. Among those, 139 then chose to reenlist for longer and another 1,000 extended at least into fiscal year 2021, the Army said.

The overall increase in retention allowed the Army to lower its recruiting goal for the coronavirus-impacted year, once about 68,000, to about 62,000. That came as the Army in March shut its 1,4000 recruiting stations across the nation to the public and moved its efforts solely online.

Recruiters learned they could still find recruits through social media and other internet platforms, and talk to them on the phone and in virtual meetings. Vereen said those practices will largely continue even after the pandemic ends.

“It has really streamlined our processing,” he said. “We can do 90% of our [recruit] processing and recruiting operations online. There's a few things we have to do in person, but we have learned that we can do a majority of it online.”

And that will continue well into the future, but especially in 2021 as the Army continues to be impacted by the pandemic while also expecting to be ordered to increase the force, Vereen and Brito said.

“Some of the opportunities and changes we’ve identified about how to leverage virtual training [and recruiting] opportunities …. will carry over to what will be post-pandemic, one day,” Brito said. “We're growing, and we have great soldiers, great opportunities, challenging jobs to provide the sons and daughters of America that you choose to volunteer to serve.”