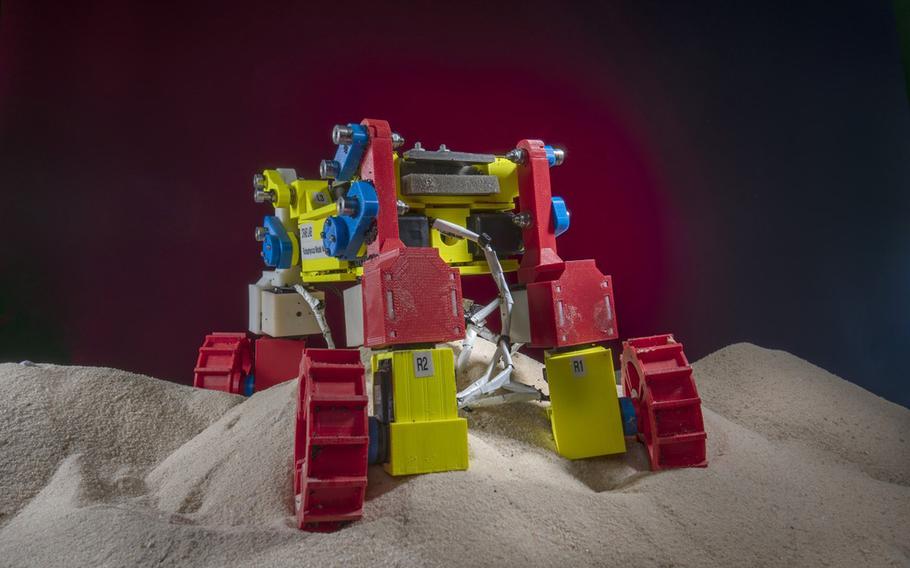 Researchers at Georgia Tech developed a robot known as the Mini Rover that can navigate loose sand without getting stuck, in collaboration with the NASA Johnson Space Center and funding from the Army Research Office, the Army said May 14, 2020. (Christopher Moore/Georgia Tech)

Researchers at Georgia Tech developed a robot known as the Mini Rover that can navigate loose sand without getting stuck, in collaboration with the NASA Johnson Space Center and funding from the Army Research Office, the Army said May 14, 2020. (Christopher Moore/Georgia Tech) 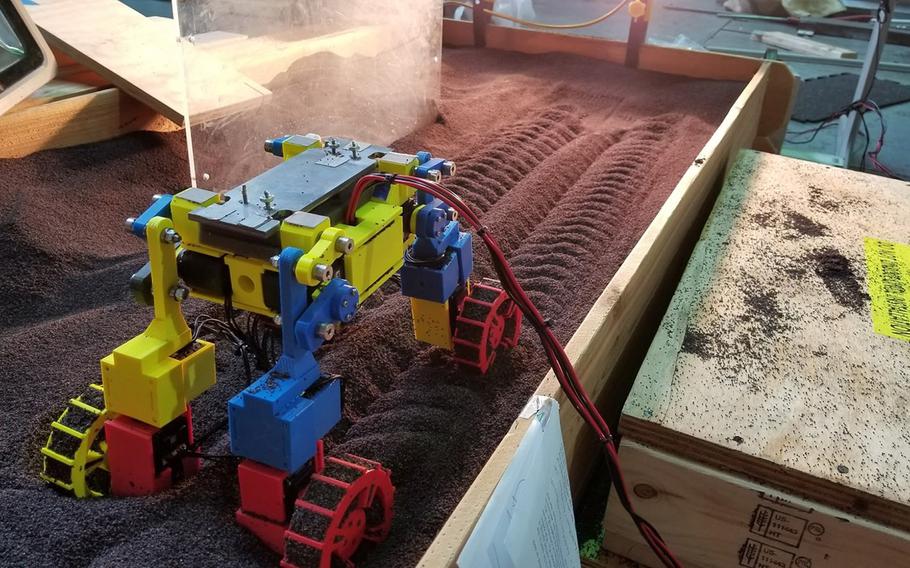 A robotic Mini Rover developed by Georgia Tech and NASA, with Army funding, traverses a bed of poppy seeds designed to mimic the loose sand found on Mars and the moon. The robot was used to study how to climb sandy planetary or lunar hills without getting stuck, an Army statement said May 14, 2020. (Christopher Moore/Georgia Tech)

A robot developed with Army funding could help NASA explore the moon, Mars or beyond.

The robot, known as the Mini Rover, can climb hills of loose sand without getting stuck by using wheels that can spin, wiggle and walk, an Army statement said.

Researchers at Georgia Tech made the Mini Rover using 3D printers, with help from the NASA Johnson Space Center and funding from the Army Research Office, the statement said.

The research could help NASA avoid the loss of rovers in extraterrestrial soil, such as when the Mars rover Spirit got stuck in loose sand near the Gusev crater after its wheels lost traction in 2010.

Researchers said the Mini Rover can get out of similar jams by combining elements of both wheeled vehicles and legged robots.

The Army, which has spent much of the past few decades fighting in deserts, said the “lessons learned” from the research interested them for potential applications on Earth.

In experiments, the Mini Rover traversed loose terrain — poppy seeds during trials — by having the wheels perform different tasks.

The front wheels in one experiment spun, pushing material backward. The rear wheels, meanwhile, wiggled from side-to-side, while spinning in a motion that researchers likened to paddling in water.

The rover in one video of a trial seemed to be stuck before it began moving its wheels like legs, as it escaped its predicament.

“This combination of lifting and wheeling and paddling, if used properly, provides the ability to maintain some forward progress even if it is slow,” Dan Goldman, physics professor at the Georgia Institute of Technology, said in the statement.

The researchers said the next step is to scale up their research to make larger robots.

They said lessons from the study — published Wednesday in the journal Science Robotics — could apply not just to robots in space but vehicles on Earth.

“Through our laboratory experiments, we have shown principles that could lead to improved robustness in planetary exploration — and even in challenging surfaces on our own planet,” Goldman said.