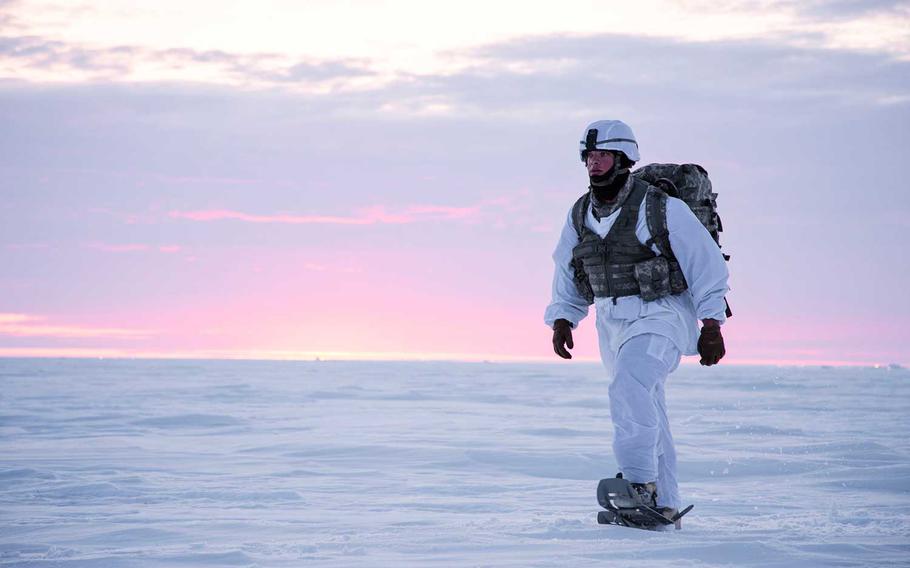 Sgt. Jeremy Hazard snowshoes across the tundra after conducting an airborne operation during exercise Arctic Pegasus in Deadhorse, Alaska, May 1, 2014. The Army needs to reinvigorate how it trains, equips and positions troops in the Arctic region as competition with Russia and China grows, according to the service’s new strategy document released Tuesday. (Edward Eagerton/U.S. Army )

WASHINGTON — The Army needs to reinvigorate how it trains, equips and positions troops in the Arctic region as competition with Russia and China grows, according to the service’s new strategy document released Tuesday.

“We're seeing that many of our competitors are focused on the Arctic, and also many of our allies and partners have concern about that competition,” Gen. James McConville, the Army’s chief of staff, said during the Association of the United States Army’s Global Force Next virtual event.

Like in the Arctic strategies of the Defense Department, Navy and Air Force, the Army’s document describes the competition that the United States faces with Russia and China for the region’s economic resources and how the impacts of climate change is opening more navigable waterways.

“With increasing levels of adversary activities in the Arctic region, it is essential for the U.S. Army to employ a calibrated force posture with units that are manned, trained, and equipped to maintain a credible deterrence and the first line of defense of the homeland,” the document states.

Most of the Army’s personnel living in the Arctic or sub-Arctic regions are soldiers stationed at three installations in Alaska: Fort Wainwright, Joint Base Elmendorf-Richardson, and Fort Greely, according to the document. The soldiers also fall under a unique command environment, supporting U.S. Indo-Pacific Command, U.S. Northern Command, and U.S. Army Alaska. U.S. European Command is also involved in the Arctic.

The Army’s intended “end state” for their Arctic strategy is to be able to deploy troops trained and equipped to operate in the region and fight in extreme conditions for extended periods, according to the document.

The new strategy incorporates the Army’s new Multi-Domain Operations concept, which involves a joint force operating in contested environments against adversaries such as China or Russia. The Army has decided to place a Multi-Domain Task Force in Alaska to experiment with how the unit can function in the region with extreme conditions, according to the document. There is now a task force located at Joint Base Lewis-McChord, Wash., and it brings together intelligence, information, cyber, electronic warfare, and space capabilities. The Army also plans to have another task force in Europe.

Having this type of task force in Alaska will allow the Army to begin tackling some of the region’s challenges, including the extreme environment, multiple combatant commands, and little infrastructure, according to the document.

“In Alaska, [the task force] will have the ability to take advantage of world-class training facilities and the presence of significant U.S. Air Force and U.S. Navy forces to experiment and train multi-domain operations,” the document states.

Training troops on how to live and operate in the Arctic is also a priority in the strategy. There is a training range and a few training centers that teach skills in cold weather and rugged terrain, including the Northern Warfare Training Center at Fort Wainwright. However, upgrading or creating new training areas are being considered to ensure that units can receive the Arctic-specific training that they need to be effective.

The Army also wants to ensure troops with this specialized training and knowledge are prioritized for units in the Arctic. This could mean some soldiers are more likely to command Arctic units because of their qualifications, according to the document.

Having this qualification information available in personnel files would “allow the Army to rapidly build environmental expertise in a unit designed for deployment, providing the Army the ability to respond to crisis without maintaining an array of environmental-specialized units,” the document states.

Working with allies and partners in the Arctic is also key to the Army’s strategy, especially working with indigenous populations who can provide their knowledge of the region for training. One of the ideas is to look into the development of an “Alaska Scouts” auxiliary force that was first proposed by Alaska’s governor in 2015. The force would be comprised of volunteers of Alaska Natives that would be “a source of environmental expertise and situational awareness in support of the joint force,” according to the document.