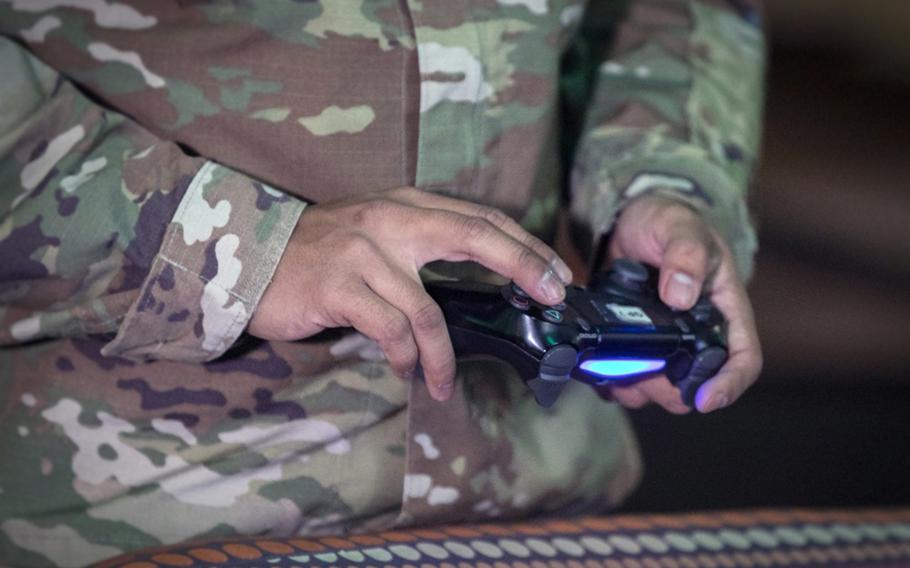 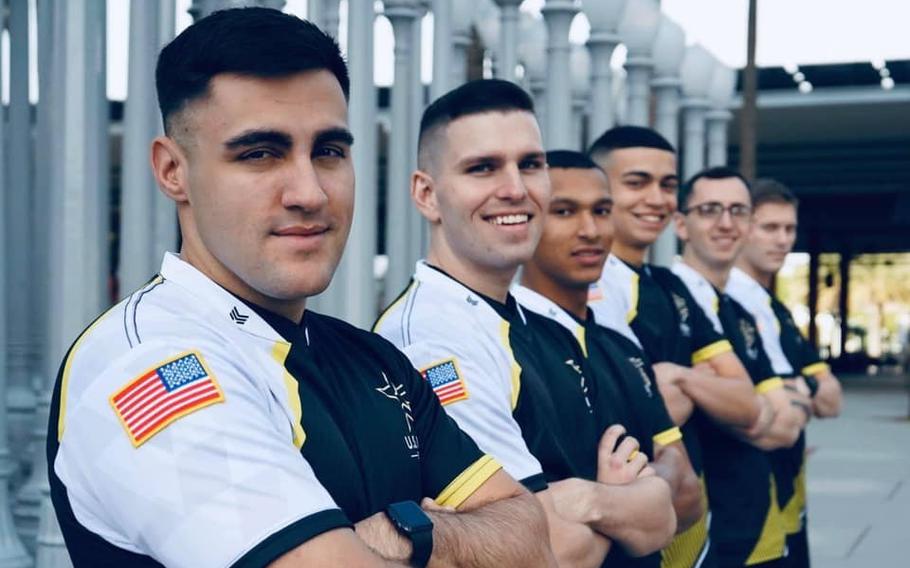 Staff Sgt. Nicholas Mackay (left) poses in a promotional photo for the newly formed Army Esports team. Mackay was one of 6,500 applicants for the competitive video gaming team, becoming one of just 16 ultimately selected. (U.S. Army)

The Army’s eSports Team will host its return to streaming on popular gaming platform Twitch on Friday afternoon after updating internal policies for moderating commenters who watch its soldiers play live, said Lt. Col. Kirk Duncan, the commander who overseas the team. The soldiers will operate under new guidelines that Army officials said ensure commenters are allowed to share their viewpoints. Rules violations that could result in commenters being banned will be clearly spelled out.

“Regardless of platform we welcome everyone’s viewpoint,” Duncan said by telephone Thursday. “But we can’t allow personal attacks on soldiers, crude and inappropriate language, pornographic material, harassment and bullying of any kind. That’s not going to be tolerated on our Twitch stream or our other social media platforms.”

The Army and other U.S. military branches have built small teams of troops to play video games online in an effort to breach gaps in reaching young Americans, who increasingly spend more time online. Army officials and Twitch have said 80% of U.S. 17- to 24-year-olds — the military’s primary target for recruiting — regularly play or watch online gaming streams.

The eSports soldiers are not recruiters by trade — team member Sgt. 1st Class Joshua David, for example, is a Green Beret who has multiple combat deployments — but they fall within the service’s massive recruiting enterprise and are charged with talking about Army life and asking users’ questions.

Among the steps the Army has taken to address freedom of speech concerns was to unban 300 Twitch accounts that had been disallowed from participating in its stream. Some of those bans were linked to dozens of posters who repeatedly asked soldiers what their “favorite U.S. war crime” was, and posted links to Wikipedia’s page on war crimes.

The Army considered that harassing behavior —referred to as trolling— and defended its soldiers’ decision to ban them. Those incidents last month captured the attention of First Amendment-focused lawyers. Soldiers, who are government officials, cannot simply stop people from expressing their viewpoints in a public forum, argued Katie Fallow, an attorney at Columbia University’s Knight First Amendment Institute.

In response, the Army has built a new approach to moderating comments on its streams, Duncan said. And it has added a process to allow those who are barred to appeal.

The new process instructs moderators to initially ignore trolling comments that do not include offensive material like pornography or profanity. After repeated instances, moderators will issue temporary bans of 1 hour, initially followed by 48 hours. Duncan will have to sign off an decisions to permanently ban users.

The Army also issued new guidelines for users to access it stream. A simplified summary of those rules breaks it down into a simple list of “do” and “do not.” Do: “Be civil to everyone, be respectful of everyone [and] express your point of view.” Do not: “Use profanity, demeaning or obscene language; advocate unlawful violence; make personal attacks; harass or bully any person; spam; disclose any other person’s private information; advertise or offer to sell any product or service [or] post in a language other than English.”

In a statement earlier this month, the Knight First Amendment Institute said it was pleased the Army and the Navy — which faced similar allegations of speech violations and briefly paused its eSports team’s activities before restarting last week — unbanned users, and said it will watch to ensure the military enforced new policies to protect individuals’ rights to share their viewpoints.

Duncan said the Army’s eSports team would return to Twitch from 4 to 7 p.m. EST Friday playing “World of Warcraft.”

The team, he said, is committed to ensuring that those who express their viewpoints or ask questions civilly will not face discipline such as a temporary ban. The Army, meanwhile, will continue to fine tune its policies, as it seeks out young Americans via online gaming that could be a fit for the service.

“We’re a learning organization,” he said. “We can always improve.”