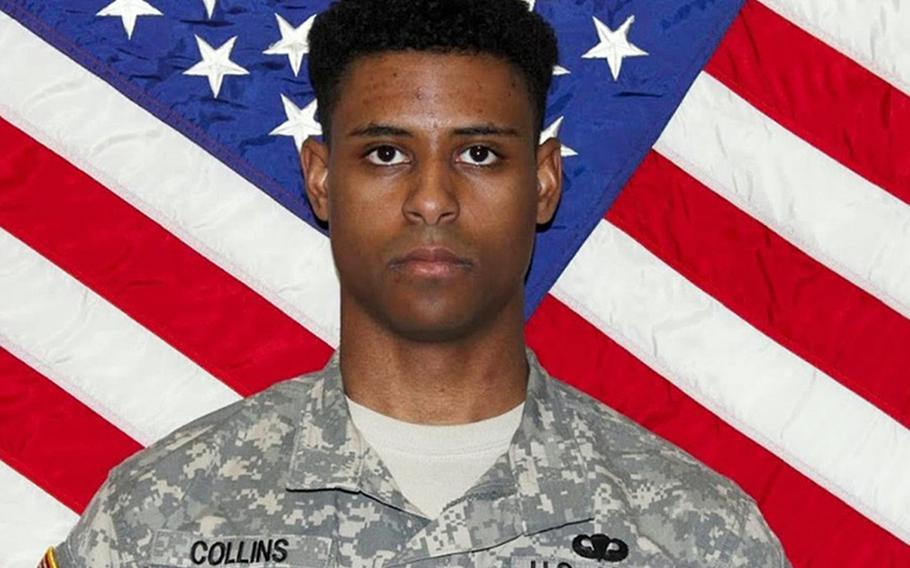 The Army’s move to promote 2nd Lt. Richard W. Collins III to first lieutenant recognizes his bravery “in the face of evil,” Democratic Reps. Steny H. Hoyer and Anthony Brown, and Sens. Ben Cardin and Chris Van Hollen said in a joint statement praising the decision, but calling it “overdue.”

The Army notified them of the decision to promote Collins on Wednesday, they said.

“The Army considered the standards and criteria required for an honorary promotion and found that 2LT Collins displayed exemplary conduct in the performance of his duties commensurate with a first lieutenant,” said Army Secretary Ryan D. McCarthy in a letter cited by the statement.

Collins was a model student and cadet at the university located outside Washington, McCarthy said. Defense Secretary Mark Esper concurred with the letter, a Pentagon memo the lawmakers posted online said.

The 23-year-old was set to graduate in May 2017 when he was stabbed while visiting the University of Maryland’s College Park campus.

In December, a jury found Sean Urbanski, 24, guilty of first-degree murder for the stabbing, but his sentencing was delayed by the coronavirus pandemic.

“No family should have to endure the heartache felt by the Collins family since the tragic death of their son,” the lawmakers said in their statement. “This senseless loss was deeply disturbing.”

Urbanski, who is white and was connected to the Facebook group “Alt-Reich: Nation,” told Collins to “step left, step left if you know what’s best for you” before the stabbing, police said, according to Annapolis’ Capital Gazette. The social media group, which has since been deleted, contained racist material, officials said.

Prosecutors sought hate crime charges against Urbanski, claiming that Collins was targeted because he was black. But a judge dropped that charge on the grounds that the prosecution had failed to provide enough evidence that hatred was his sole motivation, as the law required, the newspaper reported.

The prosecutor, backed by the Collins family, had successfully pushed the state legislature to broaden Maryland’s hate crime statutes in the wake of the decision. In March, the law was changed to require that hate only be a substantial part of the motive.

In Collins’ memory, Maryland Democrats have introduced House and Senate bills seeking to extend some military death benefits to ROTC graduates and their survivors.

“He had what it would take to be a general,” said Robinson, a retired Army lieutenant colonel.

The Army’s decision to advance him to first lieutenant was a testament to his contributions at the university and to “the impact he most certainly would have made” while serving in the military, the lawmakers said.

“We do not know what would have been, but we do know that his memory will stand as a reminder of the duty, honor and sacrifice borne daily by our servicemen on and off the battlefield,” they said.