Army announces a $2.8 billion family housing investment over the next five years 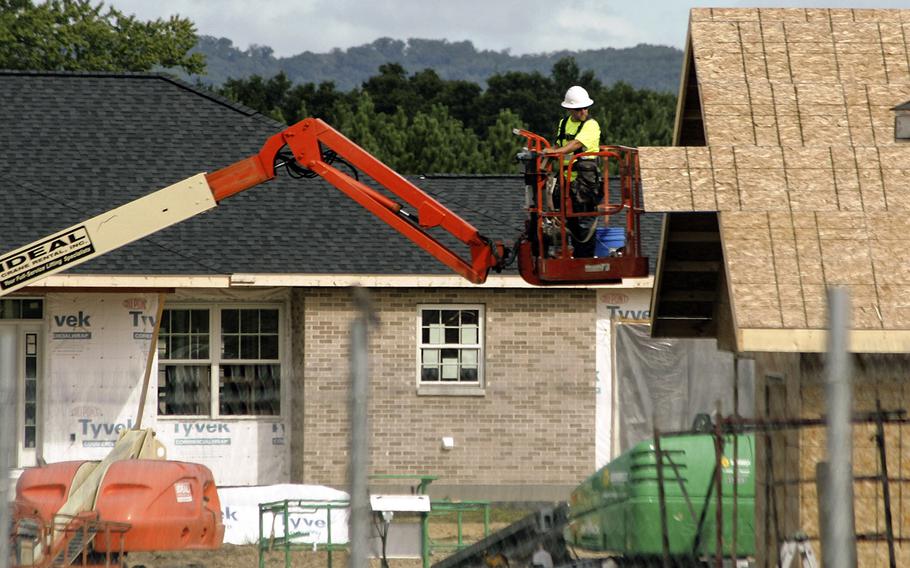 In an August, 2016 photo, contractors work on new housing units at Fort McCoy, Wis. The Army plans to invest $2.8 billion into base housing over the next five years, including 3,800 new homes and renovations for nearly 18,000 homes. (Scott T. Sturkol/U.S. Army)

AUSTIN, Texas – The Army plans to invest $2.8 billion into base housing over the next five years to build thousands of new homes and renovate existing units, the service said Thursday.

The money will be used for 3,800 new homes and renovations for nearly 18,000 homes at Army bases. No details were released about which bases would benefit, or the scope of the repairs.

The announcement follows two years of reporting that exposed the dangerous conditions that some military families face in base housing, such as exposure to lead paint, mold and asbestos; pest and insect infestations; and poor maintenance that exacerbates the issues. Many families have said housing left their children with lasting health problems. At least eight lawsuits are pending from military families against the private companies that manage base housing.

After congressional intervention, officials from all military branches conceded that some of the problems stemmed from their own poor oversight of the private companies that manage 99% of housing at stateside bases.

“We’ve still got a long way to go. We have energy and wind at our backs right now, but we still have a long haul in front of us,” Army Secretary Ryan McCarthy said Thursday during a call with reporters to discuss quality-of-life issues. “Over about 18 months or so, we’ve vastly improved our management, our communication with the [private] companies, we've empowered installation commanders, particularly where they are the ones that drive the decision on incentive award fee, so they can really hold the contract contracting companies accountable.”

The $2.8 billion builds on $500 million investment last fall, he said

The improvements touted by the Army in Thursday’s news release included hiring 100 additional staff at installation housing offices to provide quality assurance and control checks on work done in homes; quarterly town hall meetings where base residents can voice their concerns; training Army leaders on their role supporting soldiers and families; and policy revisions that improve oversight. The Army also established a Housing Environmental Health Response Registry to address concerns.

In its intervention, Congress created a Tenant Bill of Rights, which guarantees base housing residents 18 specific rights related to the quality of housing, how to handle disputes with the landlord and a better understanding of leases and the maintenance history of a home.

The National Defense Authorization Act of Fiscal Year 2020 required the rights be signed into effect by May 1. One month after the deadline, Defense Department officials signed a letter including only 14 of those rights. Still missing are the right to withhold rent, a dispute resolution mechanism, seven years of work history records and a standard lease.

“Finally, as negotiations continue with the private companies over the implementation of these remaining rights, we urge you to consider convening a temporary housing advisory group of independent experts to offer you sound counsel,” wrote Sens. Mark R. Warner, D-Va., Tim Kaine, D-Va., and Dianne Feinstein, D-Calif.

McCarthy said Thursday that they are working toward implementation of each right. A pilot program for the maintenance history is underway and he believes “we are done” with the common lease.

“The remaining two are going to be tough,” he said. “In particular, the dispute resolution. … We need to make sure that the person that's the arbiter is truly a third party, that doesn't have equity on one side or other of the equation. So we're trying to work through that with the companies as well as [with] Congress.”

Army leaders also announced they requested a major cash infusion of $9.62 billion to the barracks over the next 10 years. Sgt. Maj. of the Army Michael Grinston said Tuesday that the Army aims to be rid of the facilities most in need of repair by 2030.

“I ask us all to show our soldiers that we care by just saying, ‘Hey, let’s go check out where you live,’” Grinston said during a speech at the annual conference of the Association of the U.S. Army. He encouraged leaders to demand repairs when they see problems during those visits.

“It is OK that if something is not right, to demand, not just ask, but demand that we fix it,” he said.