Army and he knows it: Arizonan set to go from DJ to GI 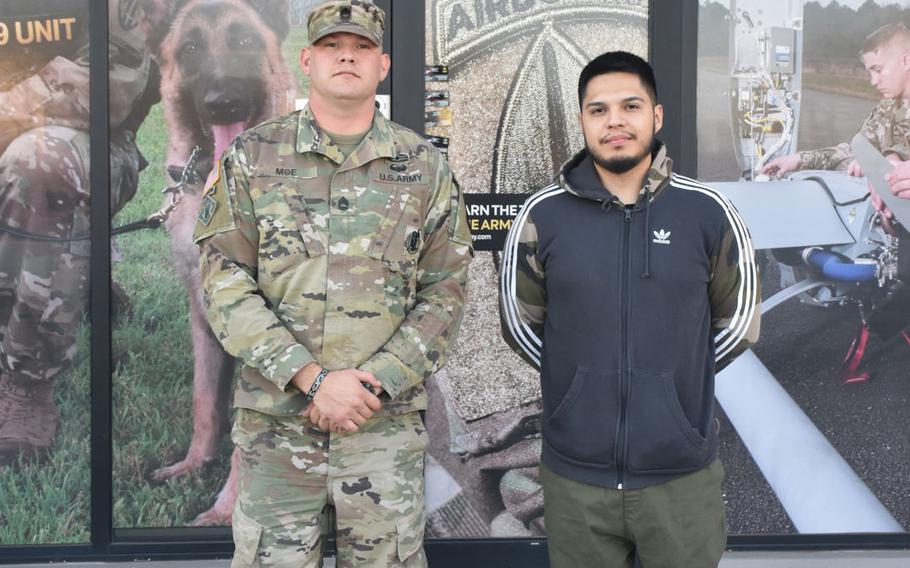 Future soldier Kenny Oliver, right, poses with his recruiter Sgt. 1st Class Daniel Moe outside Arrowhead Recruiting Station in Glendale, Ariz., on Dec. 3, 2020. Oliver, who helped write and produce the 2011 hit "Sexy and I Know It," enlisted in the U.S. Army in late 2020 and will ship out to basic combat training on Dec. 28. (Alun Thomas/U.S. Army)

DJ Kenny Oliver, who created songs with dance music duo LMFAO and other big names in the past decade, started losing his enthusiasm for music as club and festival gigs dried up during the coronavirus pandemic, he said.

So he dropped beat-making and enlisted in the Army.

The 29-year-old sees military service as “an extension” of things he’d done to challenge himself, he said in an Army statement.

“But to serve my country is my number one reason for enlisting,” he said.

The song that made his music career, “Sexy and I Know It,” was an earworm in 2012, when it featured in Madonna’s Super Bowl halftime show and in an M&M’s commercial that aired during the big game.

Its quirky video has been viewed over 800 million times, and the tune has been parodied and paid homage to on YouTube, including by British soldiers on a forward operating base in Afghanistan’s Helmand province.

Oliver co-wrote and co-produced it and four other tracks on LMFAO’s 2011 album “Sorry for Party Rocking,” under the pseudonym Audiobot.

The song’s chart-topping success — it’s sold over 8 million copies — was a highpoint for Oliver, who was 20 at the time. A native of Moreno Valley, Calif., near March Air Force Base, he’d been working for his dad painting houses and was teaching himself to make music by watching YouTube tutorials when he got his big break after a friend passed his remix of LMFAO’s “Party Rock Anthem” to the group.

“One morning … I got an email from LMFAO saying they’d gotten my remix and wanted to meet me,” Oliver recalled.

The band was already working on “Sexy and I Know It,” he said, but he made them a new beat for it.

“They put the vocals over it and that was the final version,” he said. “My name went on the credits as a producer and I got a plaque for it as well. It was financially rewarding and to this day I still get royalty checks.”

Later that year, he co-wrote and -produced “T.H.E. (The Hardest Ever)“ with Black Eyed Peas frontman will.i.am. That song featured performances by Jennifer Lopez and Mick Jagger and rose to 36 on the Billboard Hot 100.

He moved to the Phoenix area in 2017 and was playing clubs and festivals until the coronavirus laid waste to live performing, the Army statement said.

Recruiter Sgt. 1st Class Daniel Moe, who lives around the corner from Oliver, knew little about his successes in the music business when they first began working together.

“I think it’s an amazing thing, to be in that lifestyle for years and then join the Army,” Moe said in the Army statement.

To prepare to ship out to boot camp at Fort Jackson, S.C., later this month, Oliver said he’s been watching YouTube videos — just as he did to learn to make music.

He plans to become a chaplain assistant and, once he gets to a permanent duty station, to keep making music.

“Music is therapy for me — it’s important for me to continue to be creative,” he said.