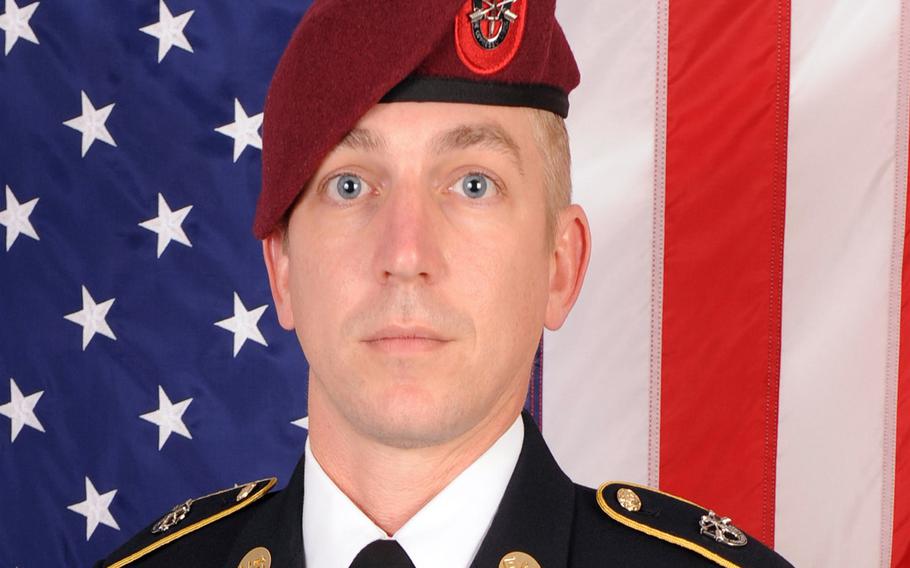 “He was healthy and all the tests, including [COVID-19], came back negative,” Erin Presley said in a chat interview. “The infectious disease doctor came in and took a look, said he felt it was HLH and would treat him, but [was] afraid it was too late.”

Hemophagocytic lymphohistiocytosis, or HLH, is a severe condition that involves a “cytokine storm,” prompting an exaggerated immune response and damaging the liver, spleen and other organs. It’s often fatal if not diagnosed and treated quickly.

On Dec. 12, days after falling ill and just weeks before Christmas, Presley died in Fort Walton Beach, Fla. A memorial for the father of six, who was assigned to 7th Special Forces Group (Airborne), was held Friday at the group’s Liberty Chapel on Eglin Air Force Base.

“I’m ... angry, sad, heartbroken, numb,” his wife told Stars and Stripes days before the memorial. “He was loved by a lot of people and especially by people who worked with him.”

Born in Milwaukie, Ore., Levi Presley enlisted in the Army in 2004 and deployed to both Iraq and Afghanistan, where as a satellite communications operator he helped maintain networks used for command and control in both countries, an obituary stated.

A graduate of Airborne School and the Army’s Space Cadre basic course, he had earned the Meritorious Service Medal, Army Commendation Medal with oak leaf cluster and Army Achievement Medal with two oak leaf clusters among his many awards and decorations, the Army said.

“He loved being a soldier, but more than that, loved being a dad,” his wife said. The couple had two children together, plus his three from a previous marriage and Erin Presley’s daughter.

“He felt like he had the flu and then all of a sudden he was in multi-organ failure,” she said.

The form of HLH that took his life is genetic and affects about 1 in 50,000 people worldwide, according to the National Institutes of Health MedlinePlus website. It is often discovered in infancy but can be found later in life.

HLH also has a second form that is not inherited, but can be triggered as a response to infection, cancers, autoimmune conditions and other diseases.

Sometimes signs and symptoms may arise without an infection, MedlinePlus states. The overproduction of activated immune cells, including T cells, leads to fever and then enlargement of the liver and spleen, and may affect blood platelet levels and other organs.

After his death, Army officials at 7th Special Forces Group (Airborne) were focused on supporting the family, the command said.

“It’s made me speechless, the Army family has really gone above and beyond for our kids, our families and myself,” Erin Presley said. “I have absolutely no words to describe the love we have been shown.”