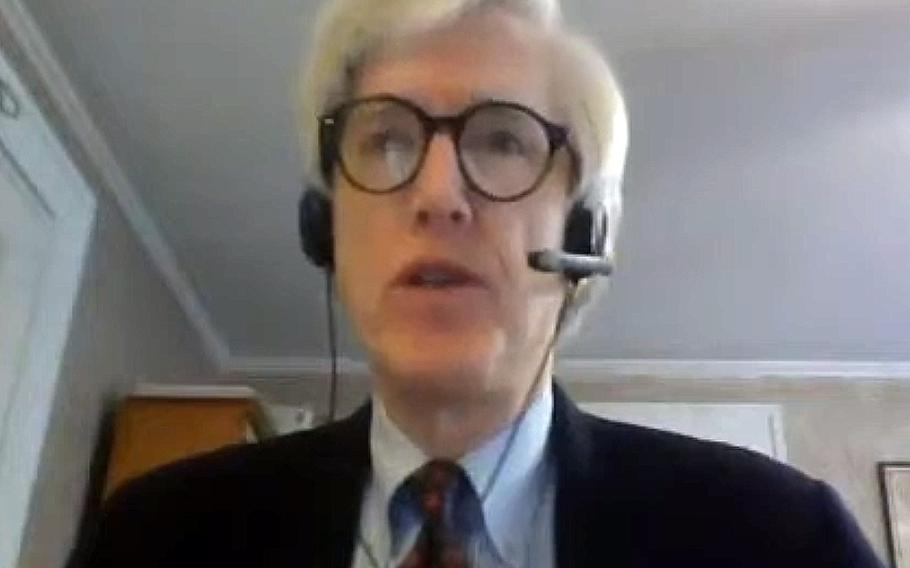 In an image taken from a video, Dr. Stephen Biddle testifies at a House Armed Services Committee hearing, Friday, Nov. 20, 2020. ()

In an image taken from a video, Dr. Stephen Biddle testifies at a House Armed Services Committee hearing, Friday, Nov. 20, 2020. () 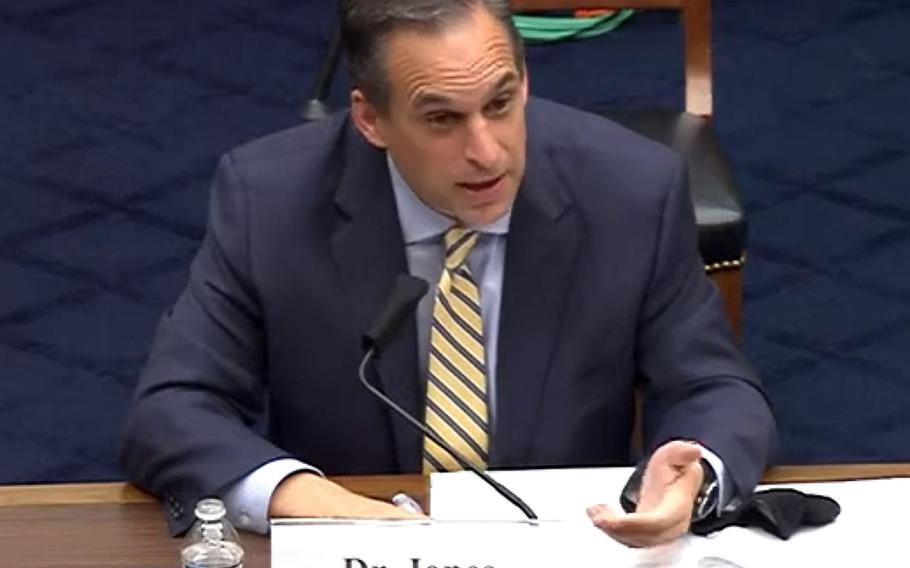 In an image taken from a video, Dr. Seth G. Jones testifies at a House Armed Services Committee hearing on Friday, Nov. 20, 2020. ()

WASHINGTON — The Pentagon should freeze troop levels in Afghanistan until the Taliban agrees to stop fighting the Afghan military or the United States risks the country falling back into the fundamentalists’ hands, a trio of foreign policy experts told lawmakers on Friday.

The experts told the House Armed Services Committee that without continued U.S. military support — especially air power — the Afghan national security forces were unlikely to win the ongoing war with the Taliban, which would likely return to power. The hearing came just days after acting Defense Secretary Christopher Miller announced President Donald Trump had ordered a drawdown of U.S. troops in Afghanistan from about 5,000 to 2,500 by Jan. 15 — five days before President-elect Joe Biden is to be inaugurated.

“Absent a peace deal, the further withdrawal of U.S. forces will likely continue to shift the balance of power on the ground in the military campaign in favor of the Taliban and other militant groups, including al-Qaida,” said Seth Jones, a senior adviser at the Center for Strategic and International Studies, a Washington think tank. “The drawdown will have an impact on the U.S.’s ability to train, advise and assist the Afghan national defense and security forces in the middle of the war against the Taliban, a group which we should all remember is an extremist organization committed to establishing an Islamic emirate in the country … Is that what we want to leave behind in Afghanistan?”

Jones testified Friday alongside Ryan Crocker, who served as an ambassador to several nations for former Presidents George W. Bush and Barack Obama, and Stephen Biddle, an international and public affairs professor at Columbia University and a senior fellow at the Council on Foreign Relations. The hearing did not include officials from the Pentagon or other federal agencies.

Despite nearly 20 years of U.S. training, the Afghan military is not strong enough to stand on its own against the Taliban, said Biddle, who implored Trump to rescind his withdrawal order and allow Biden to begin his presidency with 5,000 troops in Afghanistan.

Biddle argued the troops remaining in the country were just as important to backing ongoing negotiations between the Afghan government and the Taliban as to boosting Afghan troops’ battlefield success. The presence of American troops, he argued, was a “critical bargaining chip” in those negotiations that have achieved little since beginning in September.

“I believe our interests are best served by no further withdrawals without a settlement to end the war,” Biddle said. “We should be prepared to withdraw those troops entirely in exchange for negotiating concessions from the Taliban precisely in order to increase our ability to get such concessions.”

Like the witnesses, most House Armed Services Committee members who spoke Friday agreed some American troops should remain in Afghanistan. Rep. Adam Smith, D-Wash., chairman of the committee, said he backed Trump’s partial withdrawal but warned further cuts could be harmful, as terrorist groups there — primarily al-Qaida — aim to attack the U.S. homeland.

The prolonged American efforts in Afghanistan, Smith said, have seen at least one success — the United States has not been struck again by a major foreign terrorist attack since 9/11. However, he added, “it has become clear [American troops] are not going to be able to impose peace on Afghanistan.”

Others noted the American public had long grown weary of the two-decade war. Rep. Bradley Byrne, R-Ala., said his constituents were tired of “nation-building in Afghanistan” but would probably support a small counterterrorism force remaining there.

One congressman argued the United States should end its role in Afghanistan entirely.

“To me the biggest loser in Afghanistan is who stays the longest,” said Rep. Matt Gaetz, R-Fla. “This has been the longest war in our nation’s history. Our country is weary of it, even if the House Armed Services Committee is not.”

Trump had long vowed to end U.S. involvement in Afghanistan, but he will leave office having not fulfilled that promise first made during his 2016 presidential run. He began downsizing the American force in Afghanistan from about 14,000 toward his new goal of 2,500 earlier this year after his administration struck a unilateral accord with the Taliban in February.

That agreement called for a steady drawdown of U.S. troops through May 2021 if the Taliban met certain conditions, including not striking U.S. and NATO troops and cutting ties to terrorist groups, especially al-Qaida. While the Taliban has mostly ceased attacking U.S. troops, officials have said, they have not cut ties with al-Qaida. The U.N. said during the summer that evidence showed the Taliban had likely strengthened its relationship with the terrorist organization this year.

Crocker urged the United States to employ “strategic patience” as it dealt with the Taliban going forward. He and Jones said it was critical the United States continue to back the Afghan government with military and financial aid until a peace settlement was implemented.

But Crocker said Trump’s latest withdrawal order provided the Taliban “all it needed to know” about America’s intentions in that country. Crocker helped establish the U.S. embassy in Kabul in 2002 after the Taliban’s ouster following the 9/11 terrorist attacks and then served as ambassador to Afghanistan from 2011 to 2012.

“The Taliban has no intention, and in their view no need, to make good on any of their commitments” in the deal with the United States, he said. “They’ll say what we want to hear, but they know that we’re going home.”

The Biden administration, Crocker said, should restructure the agreement with the Taliban, which he said “represented a very bad U.S. concession” by striking the accord without including the Afghan government in the process.

“These were surrender talks,” he said. “We are waving the white flag, basically saying to the Taliban, 'You win. We lose. Let’s dress this up the best we can’.”