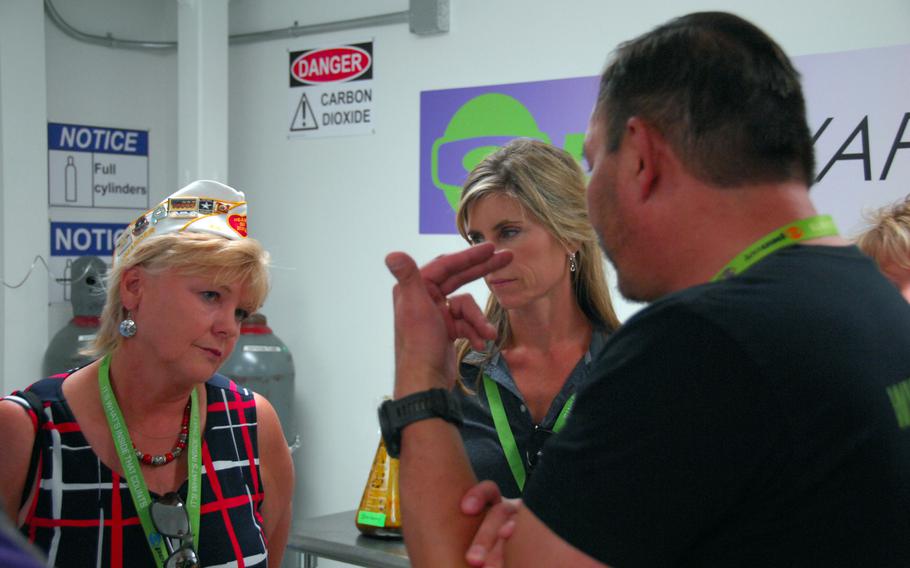 Buy Photo
From left, Alabama American Legion members Wayne Stacey, Rico Hall, Donna Stacey and a veteran who didn't want to be named get a tour of a cannabis cultivation site in Reno, Nev. during the Legion's national convention Wednesday, Aug. 23. Sue Sisley, right, a psychiatrist studying marijuana's effects on veterans with PTSD, accompanied them. (Nikki Wentling/Stars and Stripes)

RENO, Nev. – The American Legion adopted a resolution Thursday urging the federal government to allow Department of Veterans Affairs doctors to discuss and recommend medical marijuana in states where it’s legal, adding to the group’s efforts to get cannabis in the hands of veterans it could help.

The resolution, passed at the group’s national convention in Reno, Nevada, was authored by American Legion member Rob Ryan of Blue Ash, Ohio. According to the national Centers for Disease Control and Prevention, Ohio has the fourth highest rate of overdose deaths in the nation, behind West Virginia, New Hampshire and Kentucky. It’s also one of the 29 states that permit some form of cannabis use. Ryan said he’s heard from veterans “over and over and over again” who use marijuana as an alternative to addictive opioids.

“Our state congressmen, when the American Legion says something, they listen. Hopefully, this will have the same impact at the federal level,” Ryan said. “People should not be afraid to go to their doctors and talk honestly.”

Ryan shepherded the resolution through his local American Legion post, and then took it to the county, district and state level before it was discussed in Reno this week. Sue Sisley, a psychiatrist studying marijuana’s effects on veterans with post-traumatic stress disorder, called it a “game changer.”

The American Legion represents 2 million veterans nationwide. As President Donald Trump spoke Wednesday at the convention, he described the group as a “very powerful organization.”

The American Legion first acted in support of medical marijuana last summer, when it decided to put its weight behind an effort to remove marijuana from the list of Schedule I drugs to allow for more research. Schedule I drugs include heroin, LSD and Ecstasy, and are designated as having no medical use.

The group has also requested meetings with Trump with the intention to ask him to change his administration’s policy on cannabis.

In May, VA Secretary David Shulkin said he was open to new evidence showing marijuana could be used to treat veterans. But VA policy implemented in 2011 prohibits its health care providers from sharing their opinions with veterans about marijuana or recommending it for medical use.

Attempts in recent years to lift that prohibition have failed in Congress.

Last year, the “Veterans Equal Access” measure passed the House as part of a VA appropriations bill, with a vote of 233-189. It also passed the Senate on a vote of 89-9, but it was stripped out of the final legislation during negotiations to reconcile differences between the Senate and House versions.

This July, the House Rules Committee blocked the amendment from going to the House floor for debate. However, the Senate could include the measure in its VA appropriations legislation. Senators are expected to discuss the federal budget when they return in September from a monthlong recess.

“Year after year, we’ve never been able to pass the Veterans Equal Access amendment,” Sisley said Thursday. “With the full weight of the American Legion behind this next round of legislation, I know we can finally get this approved.”

During the convention on Wednesday, five American Legion members from Alabama and two from New Mexico went with Sisley to Nevada Botanical Science – a cannabis cultivation site located in an industrial park just north of Reno.

They toured three grow rooms — each holding hundreds of marijuana plants at various stages of development — and a lab where marijuana is concentrated into a substance that can be used in vaporizer pens. The veterans watched a staff member take a typical “dose” from a vaporizer pen.

Army veteran Donna Stacey, the state commander for the Alabama American Legion, said she wanted to know more because of the resolution. As a leader for her state, Stacey is expected to talk with her congressmen about the American Legion’s priorities, including medical marijuana.

Recreational use of marijuana became legal in Nevada on July 1. Alabama doesn’t permit any form of marijuana use.

“It’s hard to talk about something when you’re really clueless, when all you’re doing is reading about it,” Stacey said. “When we go to Congress and say, ‘We want you to support us to see if this has any value in treating our veterans,’ now we can say we’ve been to a facility where they’re doing some controlled growing. And it gives some added value.”

Sisley approached more than 100 veterans at the convention hall in Reno, asking that they go along on the tour. Almost all of them said no. Some veterans admitted it was because of the stigma associated with marijuana.

Stacey’s husband, Wayne — who is also an Army veteran and American Legion member — went along on the tour.

“We like to be informed. We work with veterans every day, and the more we know about what is out there, the better equipped we are to help them,” Wayne Stacey said. “The more people who are exposed and become more knowledgeable and informed, you can see some changes.”