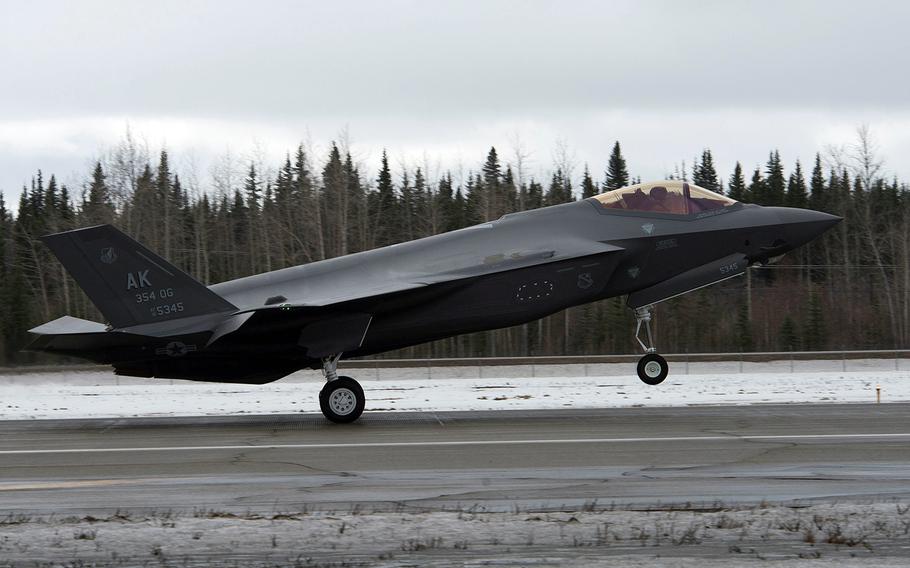 Eielson Air Force Base in Alaska received its first two F-35A Lightning II fighter jets Tuesday, with another 50 expected to arrive over the next two years.

“This first aircraft is a milestone,” Col. Benjamin Bishop, commander of the base’s 354th Fighter Wing, said in an Air Force statement Tuesday. “Making the first aircraft arrival possible has been a long path, but it’s also just first step in a journey that will continue at Eielson Air Force Base for decades to come.”

The F-35s complement the existing two squadrons of F-22 fighters based at Joint Base Elmendorf-Richardson in Anchorage.

The combination will give Alaska the highest concentration of combat-ready, fifth-generation fighters in the nation, the statement said.

The jets, along with the 18th Aggressor Squadron, whose F-16s pose as enemy aircraft during training scenarios, will train in the Joint Pacific Alaska Range Complex, a vast 75,000 square miles of airspace.

Eielson has undergone $500 million in infrastructure improvements to handle the F-35s and about 1,300 additional airmen and their families. That is about twice the number of airmen who were stationed at the base when the Air Force first announced in April 2016 that the F-35s would be stationed at Eielson.

“We get to establish what the standard looks like for [Pacific Air Forces] F-35s,” Maj. Kathryn Damron, the 354th Aircraft Maintenance Squadron commander, said in the statement. “It’s a huge responsibility, and we don’t take it lightly.”