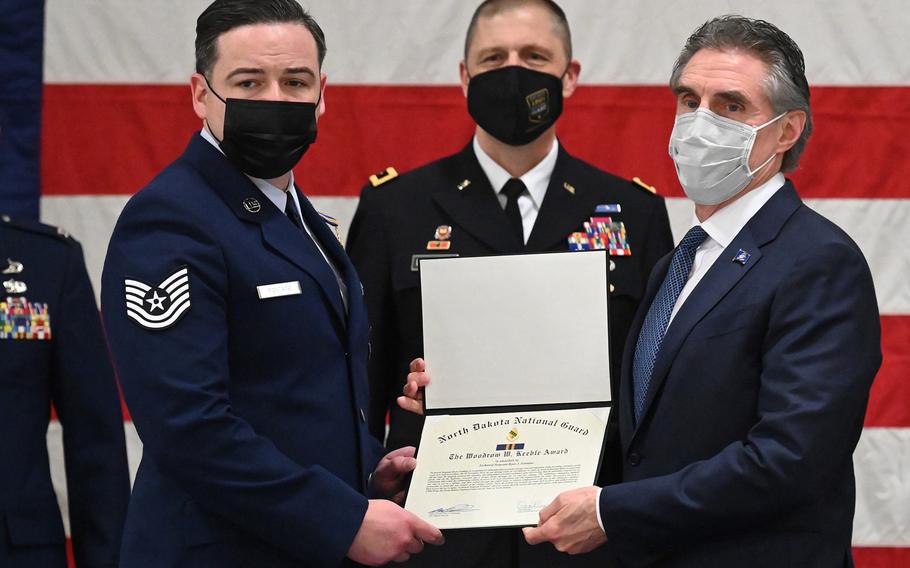 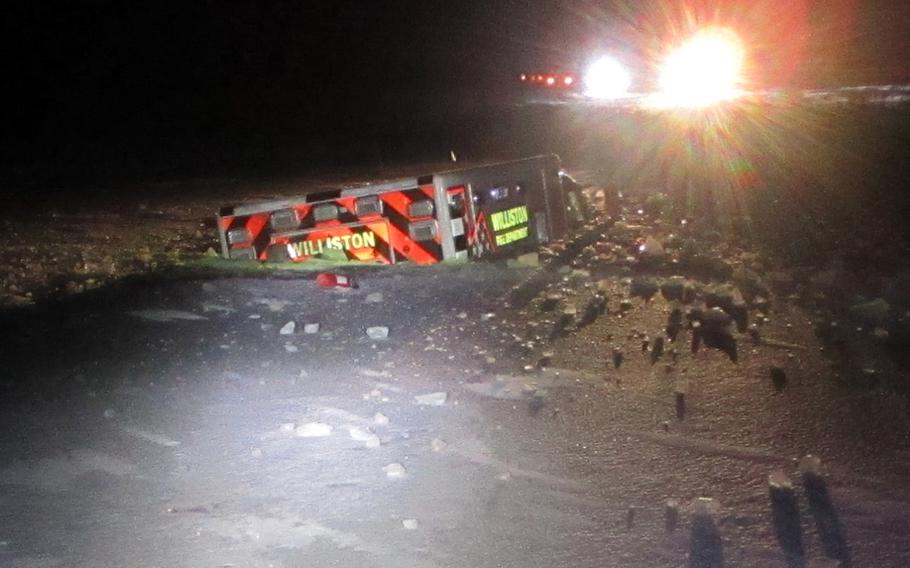 An ambulance is trapped in a frozen slough near Max, N.D., on Nov. 29, 2019. Tech. Sgt. Ryan Fontaine was recognized for helping save a 91-year-old woman who was trapped in the ambulance. (Ward County Sherriff's Department) Ward County Sheriff Bob Roed, left, shakes hands with Tech. Sgt. Ryan Fontaine of the 219th Security Forces Squadron in Minot, N.D., Jan. 3, 2020. Fontaine was recognized for helping save a 91-year-old woman who was trapped in a flooding ambulance. Woody Perez-Valdez, center, is also being recognized for his part in the rescue. ( David H. Lipp/U.S. Air National Guard)

An airman who waded into freezing swamp water in North Dakota to rescue a 91-year-old woman from a flooding ambulance was honored this month for his heroism.

“His selfless acts in those icy waters on that fateful day in November exemplify the courage and professionalism that we know and have come to expect from our North Dakota National Guard members and the Happy Hooligans,” Gov. Doug Burgum said in a video of the event, using the Fargo-based 119th Wing’s nickname.

The award, named for one of the most highly decorated soldiers in North Dakota history and the first full-blooded Sioux to receive the Medal of Honor, recognizes “courage, fortitude and determination to protect or defend life, limb or property,” the state said in 2019.

Fontaine was driving on U.S. Highway 83 on Thanksgiving night 2019, coming downhill on an icy stretch of four-lane highway, when he noticed flashing lights and two vehicles parked on the shoulder. He stopped and saw an ambulance half-submerged in a frozen slough, the 119th Wing said in a statement the following month.

The three-member ambulance crew had escaped by breaking a side cab window with an ice scraper, but the cab was twisted in the wreck, preventing the patient in the back from getting out through that window.

The crew tried to break the windows in the back with a fire extinguisher, but failed.

“A paramedic shouted at one point they had between a minute and a minute-and-a-half to get Mom out,” Kathy Paulson, the patient’s daughter, was quoted saying in the 2019 wing statement.

Paulson had been following the ambulance that was taking her mother, Dolores Paulson, to Bismarck for a medical procedure. She had pulled over and was on the line with 911 after the crash.

“I thought at that point it would sink totally under the broken ice,” Kathy Paulson said. “I did not realize at the time, but the … warning was due to hypothermia.”

Using a jack from Fontaine’s vehicle, the rescuers were able to break a window. A passerby named Woody Valdez-Perez provided a tow-rope before Fontaine and ambulance crew member Hasan Abdul-Jabbar made their way to the sinking vehicle.

Abdul-Jabbar looped the rope around Paulson, who her daughter said was “standing in water with ice chunks up to her armpits,” and then he eased her out as Fontaine and Valdez-Perez pulled her to safety.

“The whole thing probably took about 10 minutes,” Fontaine said. “But it seemed like much longer.”

Soon, ambulances and police cars arrived. Paulson was placed into another ambulance and the others were checked out and treated for possible hypothermia. Everyone survived, the wing statement said.

“I noticed about four or five vehicles as they drove by when I first got there and I am just glad a few of us stopped to help,” Fontaine said. “I am not sure how much longer Dolores would have lasted in that cold water.”

“Words cannot express my gratitude, my mother’s gratitude, as well as the gratitude of my entire family” for those who stopped to help, Kathy Paulson said. “Let it be known you are all heroes.”