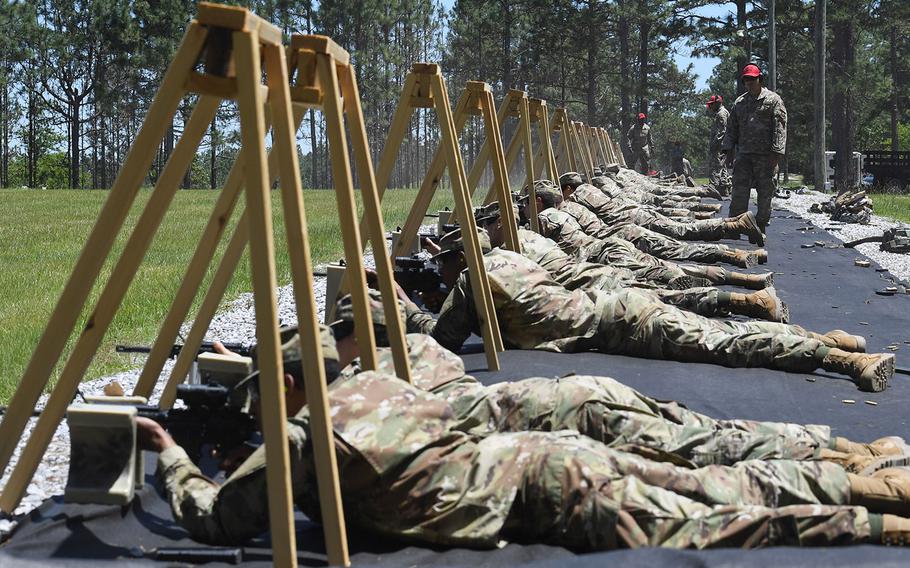 AUSTIN, Texas – The Air Force will begin sending 60 recruits each week to basic training at Keesler Air Force Base in Mississippi starting next week to allow more physical distance between recruits and prepare other training infrastructure to operate under the threat of the coronavirus for the next year.

The decision to use the base in Biloxi followed a trial run, which began April 7, and exposed some of the challenges to hosting basic training outside of Lackland Air Force Base in San Antonio. Recruits will arrive weekly through the fiscal year, which ends Sept. 30, said Maj. Gen. Andrea Tullos, commander of the 2nd Air Force, which is in charge of all service training.

Basic training at Keesler includes using facilities located at nearby Camp Shelby, a Mississippi National Guard base in Hattiesburg.

The Air Force reduced the weekly number of recruits going to Lackland from up to 800 to 460 in March after a weeklong pause to clean facilities and implement physical distancing protocols. As Keesler begins to take recruits in June, Lackland will increase its level of recruits to about 640, with a goal of bringing in 9,400 new airmen by the end of September, Tullos said Tuesday on a phone call with reporters.

“I would not recommend that we do this on a permanent basis,” she said of the Keesler training. “I would like to think that we would not do this for an extended period of time even during [coronavirus] conditions.”

Tullos was not concerned with the training recruits receive, but rather the strain of providing the supplemental support – such as administrative, medical and logistics personnel -- required to host basic training for recruits. At its capacity, Keesler can take on 360 recruits at a time.

Most challenges that arose during the trial period came in the mundane details. It took two tries to get correctly sized, tailored uniforms issued and instructors had to adjust to recruits living in dorms instead of open bays, Tullos said.

At the same time, maintaining downsized operations at Lackland allows the Air Force to clean and prepare older infrastructure for the next fiscal year.

“We do think we’re going to be under [coronavirus] conditions for perhaps as long as a year,” Tullos said. “I can’t describe what that will look like, but we have to be prepared for waves.”

Getting additional recruits through training in the summer will support any possible slowdowns or delays caused by a spike of the virus in winter months, she said.

In March, the Air Force confirmed four recruits had arrived at basic training and tested positive for the coronavirus, but Tullos and other personnel on Monday’s call declined to update the information.

Recruits are tested once they arrive for training, then restricted in their movement for 14 days, said Lt. Col. Rob Nyquist, chief of public health operations for the Air Force. They are then tested again.

Throughout basic training, the recruits wear face masks, but they can remove them in their living areas and while eating. As the summer months heat up, Tullos said they will “take extraordinary precautions to prevent heat stress” and instructors can ask recruits to remove their masks in various situations.

Basic training at Keesler also has been shortened to six weeks as opposed to the 7.5 weeks at Lackland, which also has been condensed by one week because of coronavirus precautions. The shortened requirement at Keesler is due to the physical layout of the training area, the small number of recruits and the implementation of a surge schedule that extends daily training to 10 hours and six-days-a-week, versus eight hours per day.

The service also rearranged the timing of when some administrative tasks are completed to allow for recruits to meet the physical standards required of basic training in the condensed time, Tullos said.

The recruits who attend Keesler’s training remain at the base after graduation to attend one of the 160 technical training schools located at the base.

Any decisions about continuing training at Keesler beyond September will be based upon the conditions of the pandemic and the force needs of the Air Force, according to a news release.