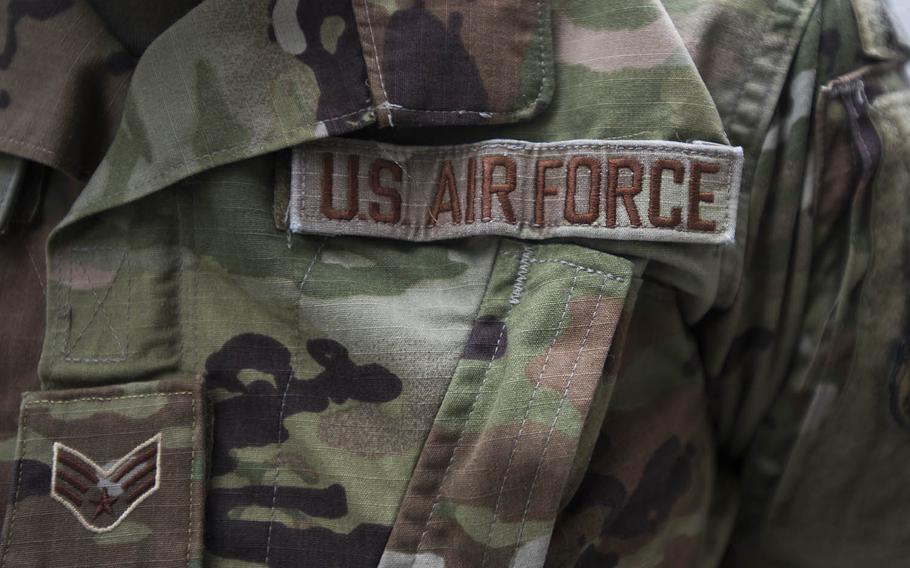 The Air Force is changing name and insignia tapes on uniforms to make them more visible. (Theron Godbold/Stars and Stripes)

The Air Force and Space Force are changing the look of nametapes on their camouflage uniforms to make them easier to read, the Air Force announced Thursday.

The services will move to a lighter, three-color pattern for rank insignia lettering of occupational badges, nametapes and service identifiers that should make ranks and names easier to see on the Operational Camouflage Pattern — OCP — utility uniform.

“We received significant feedback that prompted this update,” Lisa Truesdale, the Air Force’s military force management policy deputy director, said in a statement. “The current rank insignia, badges, name and service tapes on the OCP uniform are sometimes challenging to see against a seven-color background.”

The Army’s nametapes are much easier to see, Senior Airman Yong Hwa Song told Stars and Stripes on Friday at Yokota Air Base in western Tokyo. The spice brown thread color used by the Air Force obscures the letters against the camouflage background, he said.

While the current nametape, insignia and badges pattern will remain authorized for wear, the statement said airmen graduating from basic training will see new nametapes by October.

Additionally, the Army and Air Force Exchange Service has begun to stock the new three-color pattern, the statement said.

The Defense Logistics Agency, which manages the global supply chain for the Defense Department has placed an order for the new name tapes, which should be in circulation by November, the statement said.

The Air Force will retain the spice brown thread used for letter on name tapes and rank insignia, while the Space Force will use blue stitching.

Stars and Stripes reporter Theron Godbold contributed to this report.