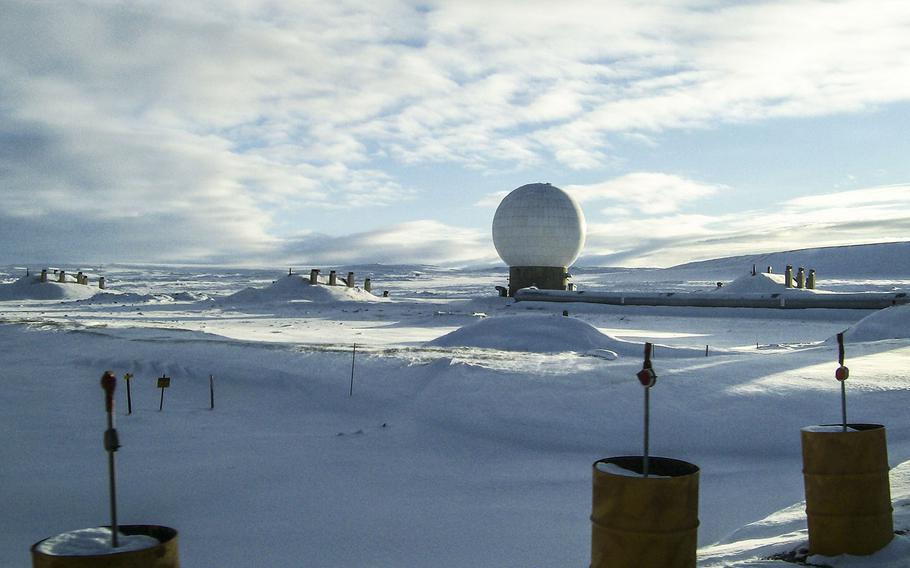 This white golf ball like structure houses one of several radars that scan the skies for foreign military rockets and missiles at Thule Air Base, Greenland. (DOD)

WASHINGTON — Air Force and Space Force leaders said Tuesday that the United States must invest in upgrading its aging but critical Arctic-based homeland defense infrastructure and increase training in the world’s northernmost region as other global powers challenge for military influence within the Arctic Circle.

The United States can no longer simply look at the Arctic region as a conflict-free buffer zone as it has for decades because other world powers, including Russia and China, have turned their attention to the region for military purposes and to exploit plentiful natural resources, said Air Force Secretary Barbara Barrett, who spoke alongside the top generals for the Air Force and Space Force in an Atlantic Council video event to unveil the Air Force Department’s first-ever Arctic Strategy.

“The Arctic is among the most strategically significant regions of the world today – the keystone from which the U.S. Air Force and Space Force exercise vigilance,” she said. “This Arctic strategy recognizes the immense geo-strategic consequence of the region and its critical role for protecting the homeland and projecting global power.”

Barrett said the United States does not seek conflict in the Arctic and she hopes to see rules implemented in the region that keep most of it uncontested and peaceful. But, she and the generals said, the Air Force cannot just retain the status quo.

Russia is the world’s only nation with offensive capabilities permanently stationed inside the Arctic Circle, including missile launchers, Barrett said. That is likely because Russia’s economy relies heavily on resources from the Arctic. Russia is also the only one of the world’s seven geographic Arctic nations that is a military adversary to the United States.

In recent weeks, Russia has routinely flown fighter and bomber aircraft over the Arctic and close to Alaska’s shores, forcing Air Force jets to scramble to intercept them in apparent tests of U.S. air defenses. Such incidents show the necessity for retaining advanced warning systems in the region, said Gen. David Goldfein, the Air Force chief of staff.

The Air Force Department, which includes the Air Force and the new Space Force, has an outsized responsibility for the Pentagon’s Arctic operations, accounting for some 79% of the Defense Departments activities in the region, Barrett said. It controls the only active U.S. military base above the Arctic Circle, Thule Air Base on Greenland’s northwestern coast and air bases in Alaska, which host fighter jets and other aircraft critical to defending U.S. and Canadian airspace.

Space Force’s top officer, Gen. John Raymond, pointed to his service’s activities largely at Thule as a key part of its ability to protect the U.S. mainland from potential missile attacks and to protect critical American satellites in Earth’s atmosphere.

The Arctic region is the best location for the United States to command and control its satellites, but its location also provides adversaries the clearest opportunities to interfere with or target those assets, Raymond said.

“It’s vital, absolutely critical terrain for us,” he said. “Thule Air Base and Clear Air Force Station [in northern Alaska] are the front lines for our [Space] forces to protect our nation. On top of the world at the [North] Pole gives us great access to those satellites … [and] makes it an extremely advantageous place to operate from. Although, it’s not easy to operate from there.”

Much of the infrastructure that Air Force and Space Force troops use in their missions at those locations dates back to the Cold War, Barrett said. She vowed an increase in technology for those locations.

Goldfein, who is set to retire next month, said he expects airmen will spend more time in the Arctic in the coming years because they need to be prepared to operate there just as well as they operate in the Middle Eastern deserts in recent decades.

“I do see an increase in activity [in the Arctic] relative to building on this strategy to ensure that airmen are prepared to go anywhere globally as an expeditionary force,” he said.

Raymond compared access to the Arctic to access in space — all nations should have the freedom to operate peacefully in those areas that are not sovereign territory, but aggressive acts will not be tolerated, he said.

“The United States is welcoming of open and free use of that common domain of the Arctic,” Raymond said. “But we have to be prepared to defend our interests and those of our allies in that region, just as in space.”