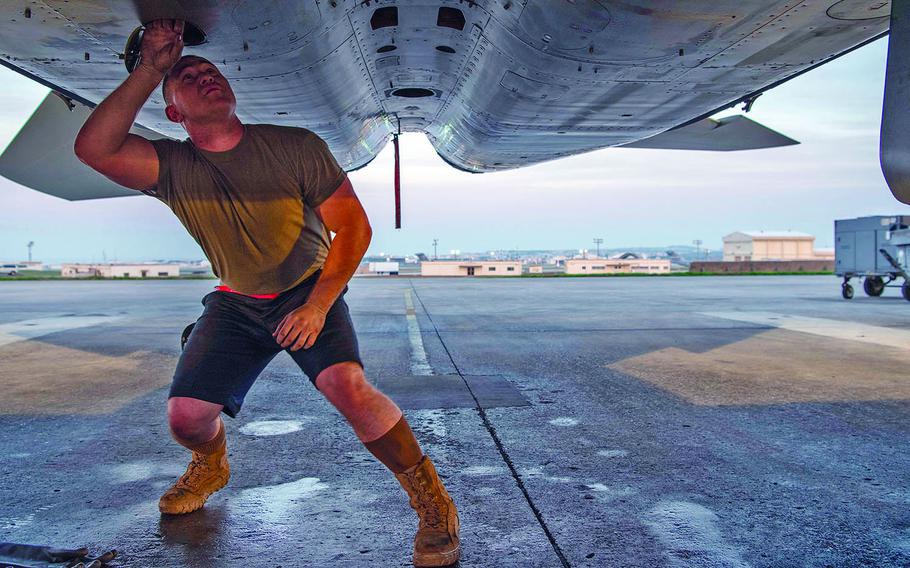 Air Force wrench turners will be allowed to wear shorts to beat the heat at work under to an impending rule change.

Starting March 15, commanders can authorize maintainers to wear navy-blue shorts instead of Airman Battle Uniform or Operational Camouflage Pattern trousers in maintenance areas when temperatures are forecast to meet or exceed 80 degrees Fahrenheit, according to an Air Force statement Tuesday.

“Authorized areas will include the flight line, hangars and dock areas outside of climate-controlled areas,” the statement said.

If a commander OKs shorts, they’ll be worn with a coyote brown T-shirt and uniform green or coyote brown socks with boots.

Four out of five maintainers will opt for shorts on hot days once they have the option, predicted Tech. Sgt. Jerry Sysourath, a C-130 maintainer at Davis-Monthan Air Force Base, Ariz.

“Throughout my career on deployments I was always jealous of working alongside [Australians and New Zealand] forces because they got to wear shorts,” he said in a Facebook message Wednesday.

Airmen and Space Force guardians will also have more options for sock colors, glasses frames and bags carried in uniform, according to the Air Force statement.

In addition to the green and coyote brown socks issued by the Defense Logistics Agency, the service members may wear conservative, solid black, white, navy blue, gray, desert sand or tan socks with their physical training gear. And the socks may have small trademark logos, the statement said.

The Air Force is also redesigning its PT gear and expects to have it available for airmen next year.

New guidance for eyeglasses and sunglasses will allow more color options for frames to include black, brown, white, navy blue, gray or transparent material, or gold or silver wire.

Additional options for bags and bag colors will be authorized for troops in uniform to include messenger and lunch bags in black, brown, gray and navy blue.

The Air Force also said its members will be authorized to wear cold weather accessories without wearing authorized outer garments. For example, a fleece cap and/or gloves may be worn without an outer garment.

Wear or use of an earpiece, any Bluetooth wireless technology or headphones while in uniform, indoors or outdoors, is authorized for official duties or may be authorized by commanders, the statement said

And tactical caps will be allowed for wear with the camouflage uniform once the acquisition process is complete for the new uniform item, which is expected to take a year.

“These options came directly from feedback from the field through the virtual uniform board and feedback from commands in the field,” Lt. Gen. Brian Kelly, Air Force deputy chief of staff for manpower, personnel and services, said in the statement. “We appreciated the feedback we received from Airmen and the opportunity to hear their concerns and ideas. Not all of the ideas fit within our standards or culture, but many do and provided us an opportunity to provide options for our Airmen.”

Other ideas from the uniform board are still under consideration, the statement added.