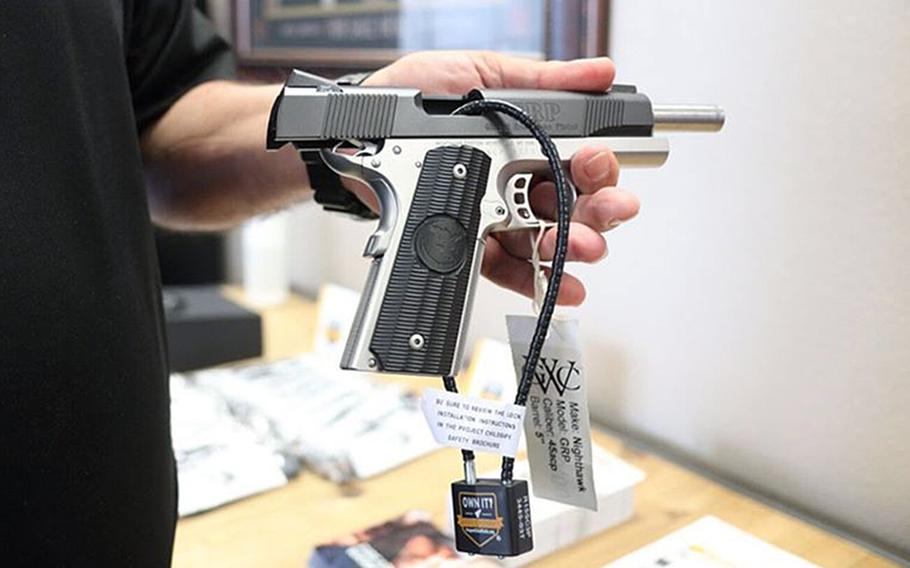 A pistol with a cable safety lock. The Air Force is distributing about 150,000 gun safety locks to bases in the U.S. as part of efforts to reduce suicides and accidental deaths, the service said. (Facebook/Project ChildSafe)

The Air Force is giving away 150,000 gun locks at all stateside bases as part of efforts to reduce suicides and accidental deaths, the service said in a statement.

The cable locks will be issued on a first-come, first-served basis. Airmen should contact their base’s violence prevention officer for details about local distribution, officials said.

“Adding a cable lock to a firearm adds on average a couple minutes to a person’s ability to pull the trigger once they’ve accessed the weapon,” Brig. Gen. Claude Tudor, the Air Force Integrated Resilience director, said in the recent statement.

“When that’s your child who doesn’t understand the danger or a person in distress trying to access that weapon to potentially do harm, those extra minutes are precious to prevent a tragedy.”

The Centers for Disease Control and Prevention found that accidental firearm discharges were responsible for the deaths of 458 people in 2018, 54 of whom were under the age of 14. That same year, there were 24,432 suicides by firearm in the United States, according to agency data.

Cable-style gun locks can be used for both pistols and shotguns. The cable is threaded through the weapon and blocks the barrel or the use of ammunition. It’s secured by a padlock and key. Basic cable locks retail for $5 to $10 online.

The Air Force initiative isn’t the first within the military community. The Department of Veterans Affairs began giving out locks in 2008, modeling a national gun safety program called Project ChildSafe.

Using a gun lock or other barrier may reduce suicide attempts, which tend to happen on impulse, mental health workers at Peterson said last year.