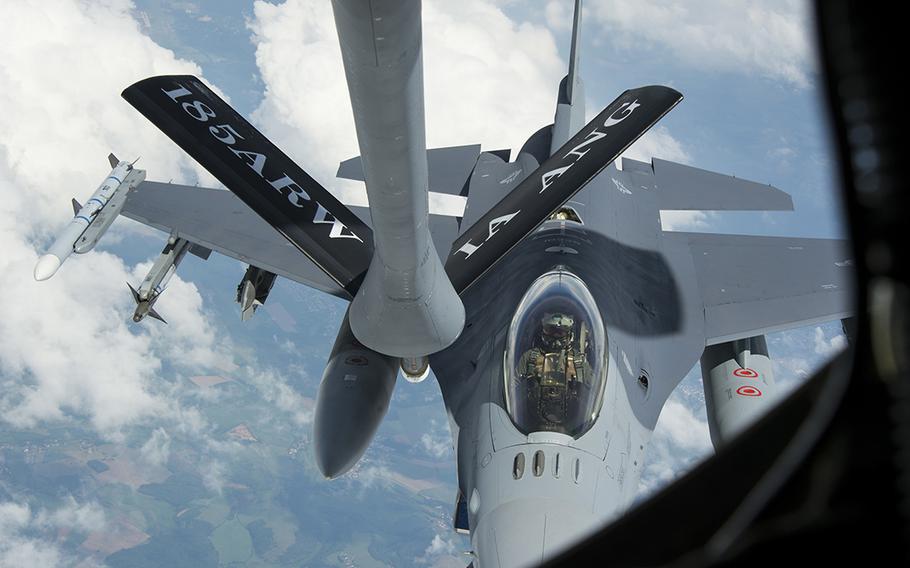 An Air Force F-16 Fighting Falcon from the 480th Fighter Squadron approaches a KC-135 Stratotanker to receive fuel over Spangdahlem Air Base, Germany, on May 30, 2017. (Dawn M. Weber/U.S. Air Force)

WASHINGTON — The Air Force on Thursday announced its new mission statement, signaling the service will distance itself from all things space and it is its own military branch.

“To fly, fight, and win … Airpower anytime, anywhere” is meant to showcase the “airpower” that the service provides to the nation’s defense and joint operations, according to an Air Force statement.

“Since the domain of space falls under the Space Force, the Air Force can now focus solely on airpower and maintain a sustained focus on core air-domain missions,” according to the statement

The change also appears to be a nod to the Defense Department’s focus on competition with adversaries such as China and Russia. The Air Force’s “ability to fight and win with airpower is key to facing emerging competitors and near-peer adversaries,” according to the statement.

The new mission statement has been under development since the fall of 2020, according to Lt. Col. Malinda Singleton, an Air Force spokeswoman.

While it appears similar, the statement is not the same as the Air Force motto, which is still “Aim High…Fly-Fight-Win.” The motto was selected in 2010, according to the Air Force.

People are just as important to the mission as the aircraft that they fly or maintain, according to Gen. Charles Q. Brown Jr., the Air Force chief of staff.

“Delivering airpower for our nation requires more than just aircraft,” Brown said in a prepared statement. “It requires total force airmen – active duty, Guard, Reserve, civilians – in all Air Force specialties working together as a seamless team to operate, maintain, and enable our mission and bring the unique capabilities and effects of airpower to bear.”