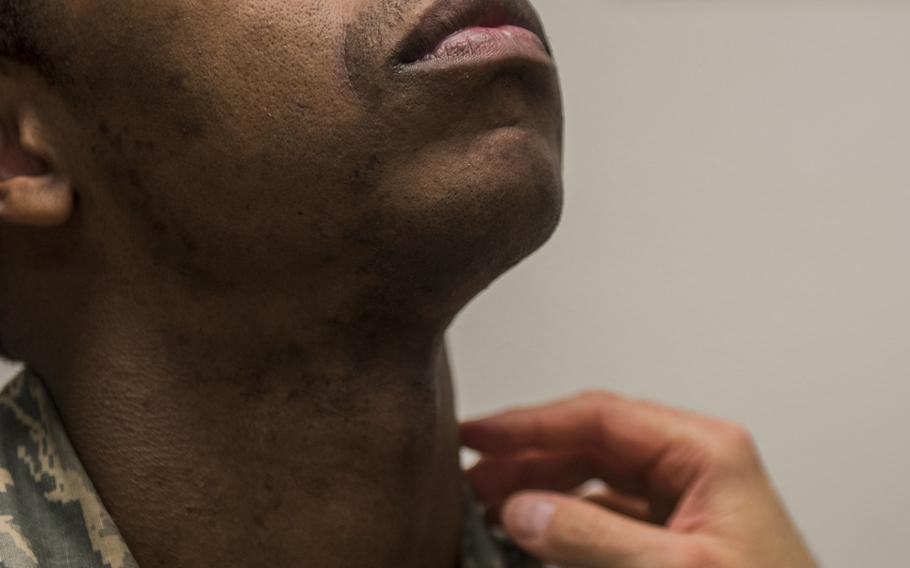 An airman raises his head as he has his neck and face inspected during a shaving waiver course at Beale Air Force Base, Calif., in March 2018. The Air Force surgeon general has authorized a five-year shaving waiver for airmen and Space Force personnel who have been diagnosed with razor bumps. (Colville McFee/U.S. Air Force)

KAISERSLAUTERN, Germany — Airmen and Space Force personnel with razor bumps no longer need to apply for a shaving waiver every year after Air Force officials extended the exemption from regular shaving for those with the painful condition.

Previously, waivers had to be updated annually.

The change was made based on “feedback from the field” and is intended to provide more time for skin to heal and prevent a recurrence, Air Force officials said.

The red bumps associated with the condition, which is most common in African American men, can cause secondary infection and excessive scarring.

The longer shaving waivers remain valid regardless of a member’s deployment or duty station.

But they do not mean beards and other facial hair can be allowed to grow to any length. Rules that say facial hair cannot exceed a quarter of an inch and must be natural — meaning no patterns or words can be shaved into it — still apply, the Air Force said. Grown-out facial hair also must not interfere with the wearing of protective equipment, such as gas masks.

Sailors with razor bumps may obtain a temporary shaving waiver to grow a beard for up to 60 days while undergoing treatment for the skin condition.