Advocacy group calls for removal of swastikas from vet cemeteries in Texas and Utah, VA says no 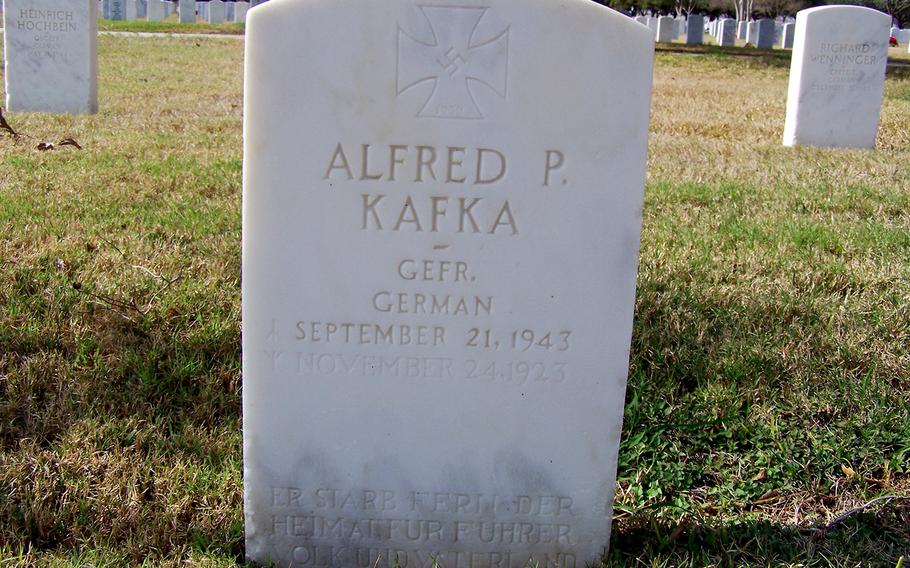 AUSTIN, Texas — Three German soldiers’ gravestones etched with swastikas will remain in national cemeteries in Texas and Utah, the Department of Veterans Affairs said Wednesday, despite demands from an advocacy group to have them removed.

Two of gravestones of the German prisoners of war are in Fort Sam Houston National Cemetery in San Antonio and another one is in Fort Douglas Post Cemetery in Salt Lake City. The gravestones are placed among American veterans, some of whom fought against Nazi Germany in World War II.

The Military Religious Freedom Foundation, which attempts to protect religious freedom for service members, said it is demanding the VA remove the symbols, which were discovered recently by a retired colonel visiting his Jewish grandfather’s grave at the Texas cemetery. Mikey Weinstein, founder of the MRFF and a former Air Force officer, said he will not reveal the identity of the retired colonel, who fears reprisal from the VA.

Weinstein said he sent a letter to VA Secretary Robert Wilkie on Monday about the gravestones, but only learned of the VA’s response through media coverage.

The VA’s National Cemetery Administration released a statement Wednesday that it “will continue to preserve these headstones, like every past administration has.”

“All of the headstones date back to the 1940s, when the Army approved the inscriptions in question,” according to the statement.

“It’s intolerable,” Weinstein said. “This should not require explaining why this is wrong.”

More so, he argued the headstones also display the phrase, which translated from German, reads:“HE DIED FAR FROM HOME FOR FUHRER, PEOPLE AND FATHERLAND.”

But the VA said in its statement that “the National Historic Preservation Act of 1966 assigns stewardship responsibilities to federal agencies, including VA and the Army, to protect historic resources, including those that recognize divisive historical figures or events.” For that reason, the headstones will remain.

Rabbi Joel R. Schwartzman, a retired Air Force colonel and chaplain, said the concern is the headstones could become a rallying point for white supremacists. As a supporter of MRFF, he said he has responded to emails that the foundation has received supporting the presence of the swastikas.

“There are reasons why most rational southern states are taking down their Civil War monuments,” Schwartzman wrote. “They are symbols that preserve a past no decent person would wish to see repeated or replicated.”

He said the headstones do not preserve history “so much as it memorializes all that the Nazis stood for and did to our people.”

These three Germans are not the only POWs buried in American veteran cemeteries. There are 11 other national cemeteries with POWs from World War II interred, though none of the other gravestones include swastikas.

At Hampton National Cemetery in Virginia, 55 Germans and five Italian POWs are buried in a discontiguous tract of the cemetery, according to its website. Of those, 28 of the Germans were part of the crew of a U-boat sunk by the USS Roper on April 14, 1942 off of Cape Hatteras, N.C. They were buried the following day with full military honors, according to the cemetery’s website.