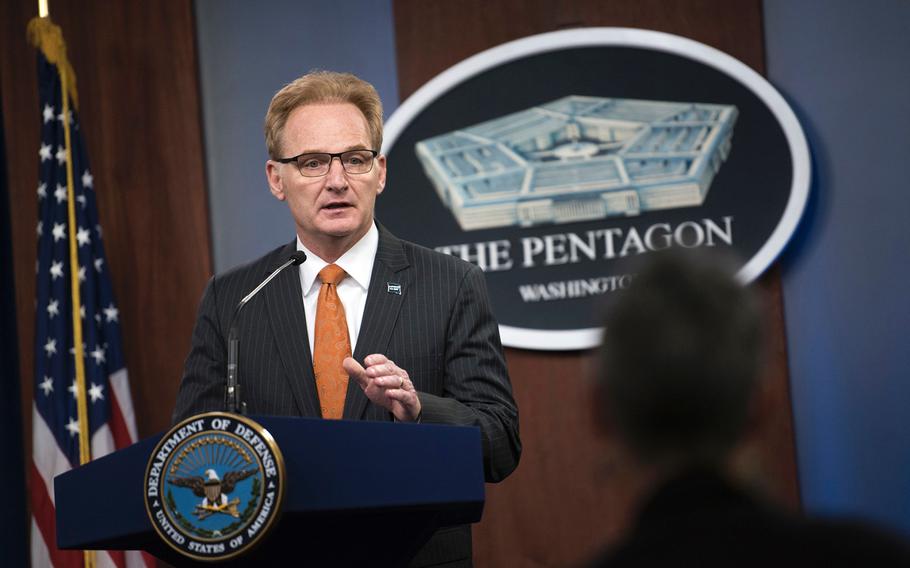 Acting Secretary of the Navy Thomas Modly speaks during a press briefing at the Pentagon, April 2, 2020. (Lisa Ferdinando/Defense Departme)

Acting Secretary of the Navy Thomas Modly speaks during a press briefing at the Pentagon, April 2, 2020. (Lisa Ferdinando/Defense Departme) Acting Navy Secretary Thomas Modly quickly apologized in a public statement Monday for saying, in a speech aboard the USS Theodore Roosevelt the same day, that the ship’s former commander was “too naïve or too stupid” to lead the crew.

Modly relieved Capt. Brett Crozier from command Thursday after a letter the captain wrote seeking help for the coronavirus-stricken aircraft carrier was leaked to the media earlier in the week.

In his speech on board the vessel Monday afternoon in Guam, Modly said Crozier “lost sight” of the ship’s mission, according to a transcript and audio recording of the speech posted online the same day.

“He compromised critical information about your status intentionally to draw greater attention to your situation,” Modly said over the ship’s internal public address system.

In a letter to The New York Times published Monday, Modly said Crozier put the nation in danger after “sensitive information about the material condition of our biggest and most powerful warship made its way out into the public arena, in the hands of our adversaries.”

Crozier must have known the letter would have gone public — otherwise, he was “either too naive or too stupid to be a commanding officer of a ship like this,” Modly told sailors in his address.

Crozier, in a four-page letter to senior military officials March 30, said: “sailors do not need to die” because “we are not at war.” The San Francisco Chronicle first reported the contents of Crozier’s letter March 31.

Addressing the Roosevelt crew, Modly said this notion bothered him the most.

“Let me tell ya something, the only reason we are dealing with this right now is a big authoritative regime called China was not forthcoming about what was happening with this virus and they put the world at risk to protect themselves and to protect their reputations,” Modly said during his speech.

China is listed among the U.S.’s strategic competitors in the National Defense Strategy, and much of the Navy’s missions in the Western Pacific challenge Chinese claims to islands and reefs in the ocean.

Modly told sailors Crozier’s letter created a “big controversy in Washington, D.C., and across the country about a martyr [commanding officer] who wasn’t getting the help he needed.”

In his apology, Modly said that he does not think Crozier “is naïve nor stupid.”

“Capt. Crozier is smart and passionate,” Modly said. “I believe, precisely because he is not naive and stupid, that he sent his alarming email with the intention of getting it into the public domain in an effort to draw public attention to the situation on his ship.”

Crozier’s letter was uncalled for because Modly’s chief of staff had been in contact with Crozier, who “expressed no alarm to him at all,” but said he was “impatient with the pace of moving sailors off the ship,” Modly wrote in his letter to The New York Times.

“Bottom line, the public disclosure of Capt. Crozier’s letter had no impact on the flow of support to the ship,” Modly wrote. “The crew of the ship was already being tested as rapidly as possible, isolated as necessary, and moved off the ship to quarantine.”

The Navy has now secured nearly 3,700 individual rooms to isolate sailors in across Guam, Modly wrote.

His decision to relieve Crozier was not well received on the ship or by the public. A petition to reinstate Crozier on Change.org had nearly 300,000 signatures Tuesday and two congressmen and at least 17 senators have signed letters asking the Defense Department Investigator General to look into Crozier’s firing.

On Friday, sailors filled the Roosevelt’s hangar bay, clapping and chanting Crozier’s name as he walked off the ship for the last time. Crozier later tested positive with coronavirus, according to a Sunday report in The New York Times.

“I understand you love him … I understand that you may be angry with me for the rest of your lives [for ousting Crozier],” Modly told sailors in his speech. “Being angry is not your duty. Your duty is to each other, to this ship, and to the nation that built it for you to protect them.”