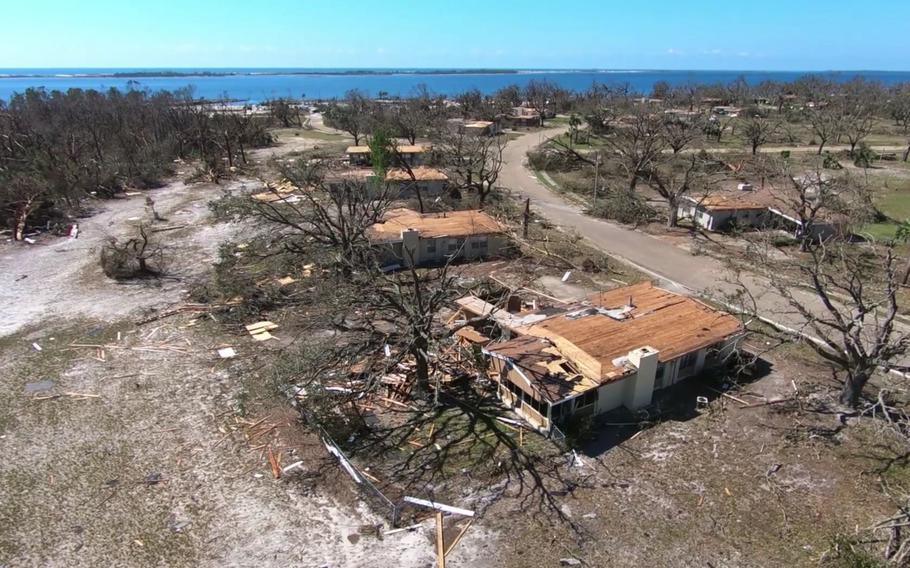 This screengrab is from a video of base housing facilities showing damage caused by Hurricane Michael at Tyndall Air Force Base, 14 Oct. 2018. (Alexander Farver/U.S. Air Force photo)

WASHINGTON — Sunday is the last day that servicemembers and their families are permitted to return to Tyndall Air Force Base to assess the damage to their homes caused by Hurricane Michael, service officials said.

Some 400 people returned to the base this week to assess their property and retrieve belongings, said Capt. Margaret Kealy-Machella, a spokesperson with the 325th Fighter Wing at Tyndall Air Force Base. Almost 11,000 members of the Tyndall community, including active-duty personnel, civilians, and family members, were evacuated because of the catastrophic storm.

“Please understand that our base and local area remain dangerous,” Col. Brian Laidlaw and Chief Master Sgt. Craig Williams of the 325th Fighter Wing announced in a video on the Tyndall Facebook page. “We are still cleaning roads, power lines and debris. This has been a major undertaking but we are getting better each day.”

Almost a week after the hurricane made landfall, Laidlaw and Williams said servicemembers and their families could return voluntarily for five days, between 10 a.m. and 3 p.m.

“The team on the ground here at Tyndall has worked hard and is now prepared to get you back on base,” Laidlaw said in the Oct. 16 video.

But people entering the base are only allowed to travel to their home or dorm. Since the travel is voluntary, residents will not be reimbursed for those costs. If a home is off-base, in an area that has lifted its evacuation restrictions, and is habitable, the family can return, according to a Tyndall news release issued Saturday.

People who return to access their property damage are required to bring enough food, water, and gas to sustain them during their visit. Air Force commanders also recommended bringing personal protective equipment such as gloves and safety glasses, as well as a tire plug kit.

“Please understand that our base and local area remain dangerous,” said the Facebook announcement. “We are still cleaning roads, power lines and debris. This has been a major undertaking but we are getting better each day.”

An assessment of base buildings is close to complete, according to Kealy-Machella, with conditions ranging from “buildings in good condition....can be repaired quickly” to "buildings that are a total loss due to structural damage.”

Pets are also not allowed back on base and children are not recommended on base “as their safety cannot be guaranteed,” according to the Facebook post. Residents are permitted to bring moving vehicles to collect belongings but are required to store them away from the evacuation area at their own expense.

People who live on Tyndall will not have to pay rent for their home from Oct. 11 through Oct. 31, said Kealy-Machella, referring to a statement made by Balfour Beatty, the on-base privatized housing company.