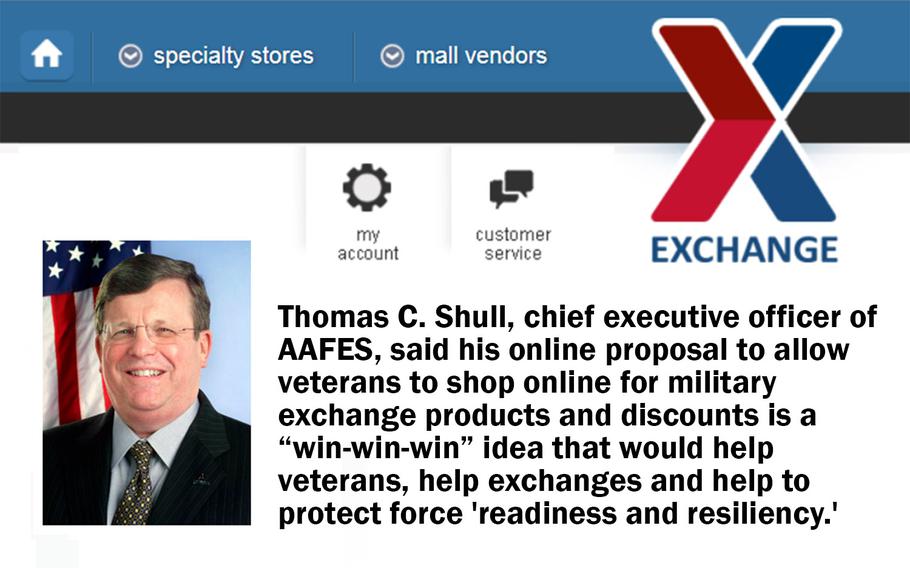 Defense officials are weighing a proposal from the director of the Army and Air Force Exchange Service (AAFES) to allow the nation’s 22 million honorably discharged veterans, and perhaps an equal number of their family members, to shop online for military exchange products and discounts.

Shoppers who use the AAFES website enjoy savings of up to 25 percent on many brand name products. They also avoid state and local sale taxes on their purchases just like on-base shoppers do.

By providing online discounts to millions of deserving veterans and families, said Thomas C. Shull, chief executive officer of AAFES, the exchange services would see overall profits soar while protecting the benefit in tough budget times and ensuring that quality-of-life programs for military families continue to be funded by exchange profits or “dividends.”

Shull pitched his idea in a May 8 memorandum to the under secretary of defense for personnel and readiness, with review and comment also sought from top manpower officials in the Army, Navy and Air Force. A spokeswoman for Acting Under Secretary Jessica L. Garfola Wright said the proposal “is undergoing staffing and no decisions have been made.”

Allowing veterans access to online exchange shopping, Shull assured officials in his memo, “will not adversely affect the benefit to currently serving and retiree personnel in any way.” Indeed, he added, it will enhance the benefit by increasing profits and, therefore, increasing dividends to support the services’ Morale, Welfare and Recreation “funding accounts.”

Preserving the shopping benefit “is in the best interest of the entire military community,” Shull added. Then he summarized why it’s in jeopardy, citing “announced and planned troop drawdowns, large cuts to the DOD budget for Morale, Welfare and Recreation activities, and fewer personnel and families living on the installation, all of which are leading to a greatly reduced customer base and decreased earnings/dividends.”

In a phone interview Tuesday from AAFES headquarters in Dallas, Shull, a West Point graduate and retired reserve major, said his online proposal is a “win-win-win” idea. It would help veterans, help exchanges and help to protect force “readiness and resiliency” by ensuring that exchange profits can sustain on-base quality of life programs.

Kathleen Martin, spokeswoman for the Navy Exchange Service Command, said with the proposal under review “it would be premature for us to comment…at this time. We will certainly evaluate and respond to any proposals or initiatives presented to us by the [Department of Navy or Department of Defense] leadership.”

Navy officials, a source said, have raised concerns about the added cost of verifying veterans’ status for millions of potential shoppers, and whether allowing online shopping would lead, over time, to pressure that millions of veterans deserve full access to on-base stores.

A total of 12 million active duty and reserve component members, retirees, dependents and survivors are now eligible to shop at military exchanges. Shull envisions that pool expanded for online shopping to 44 million including honorably discharged veterans and dependents. He projects online sales would climb from $200 million a year to $1 billion.

Unlimited exchange privileges are available now only to veterans who are military retirees or 100-percent disabled or hospitalized on base. To expand shopper eligibility requires only a change in defense policy, not law.

Whether Shull’s plan is approved or not, AAFES will broaden its selection of goods sold online by year’s end from 20 percent of items now stocked in larger exchange stores to 50 percent. AAFES also is conducting a major overhaul of its online shopping experience by partnering with outside retail experts to speed ordering and shipping, and to expand call centers. Online shoppers will see vast improvements by Labor Day, Shull said.

He first thought of giving more veterans access to online shopping a year ago, Shull said, in considering the extraordinary pace of operations from recent wars with many members deploying four or five times to Iraq and Afghanistan. This left service members at greater risk but also their families, given high divorce rates and other consequences, Shull said.

The notion that vets from any era would deserve and appreciate online discount shopping dovetailed nicely with other AAFES goals: to preserve the benefit amid tighter budgets and a force drawdown, and to sustain profits to fund MWR programs.

Last March Shull had authored another controversial memo, this one in reaction to administration plans to slash funding for commissaries, from $1.4 billion annually down to $400 million, by fiscal 2017, and allow grocery discounts to fall from 30 percent, on average, down to 10. Shull warned that an exodus of patrons would “render the commissary system unsustainable,” forcing many stores to close with “devastating” consequences to exchanges.

The administration’s plan to cut commissary support has gained no traction in Congress this year. Shull remains concerned that commissary discounts will erode over time, which would leave exchanges vulnerable too.

To date, online shopping has been a break-even feature for AAFES, having no impact on profits. But if honorably discharged veterans are allowed to shop online, Shull predicts a 10-fold increase in online sales and profits of $160 million annually, a pop of 50 percent in total AAFES profits.

Representatives of major military associations who serve on the Exchange Retiree Advisory Council unanimously support the plan. Shull said he hopes to have a decision from the Defense officials within a few months. It would take a year of preparation to execute the plan. Shull would like to have online shopping open to millions more veterans by Veterans Day 2015.