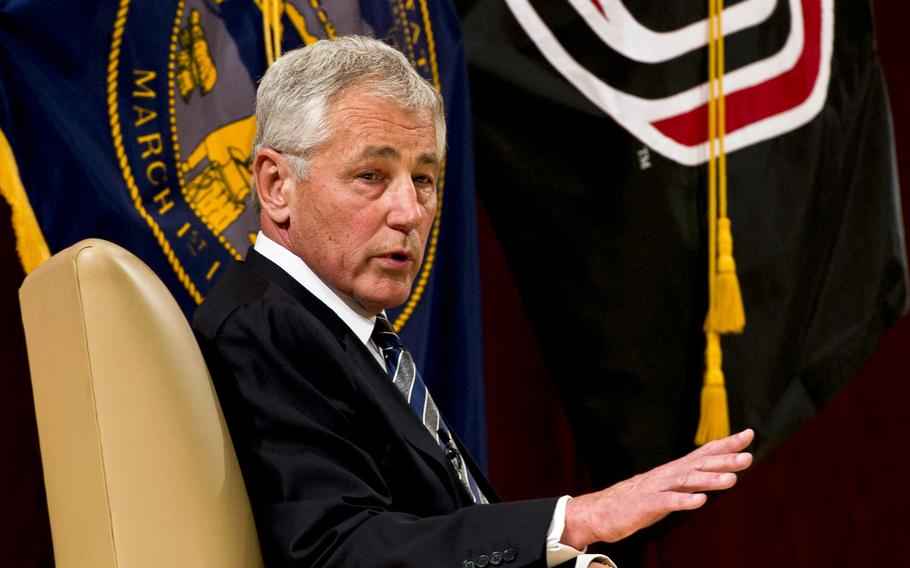 Secretary of Defense Chuck Hagel answers a question at a question and answer session with students from the University of Nebraska at Omaha, June 19, 2013 in Omaha, Nebraska. (Erin A. Kirk-Cuomo/Department of Defense)

SAN DIEGO — Sixty servicemembers have been suspended from their jobs as recruiters, instructors or victim advocates, military officials said, as the services continue to review thousands of records in light of a string of high-profile sexual assault and harassment cases.

The Army has suspended 55 soldiers from their jobs as part of its review of 20,000 people who hold “positions of authority and trust,” but the investigation will not be complete until Oct. 1, according to an Army personnel spokesman.

The re-screening and review includes looking for credible or substantiated evidence of sexual assault or harassment, prostitution or other sex-related crimes, fraternization, stalking and alcohol-related incidents, the spokesman said.

“These types of activities disqualify individuals from serving in positions of trust and authority, but may not disqualify them from continuing to serve in the Army,” the spokesman said.

The Navy decertified three recruiters and two victim advocates in its own review, which also is not expected to be complete until Oct. 1, officials said.

Even after this official review is complete, the Navy will continue to screen recruiters, instructors, victim advocates and other personnel to make sure there they are properly trained and have not engaged in any conduct that might warrant decertifications, said Cmdr. Wendy Snyder, a Navy spokeswoman, and Tammy O’Rourke, the Navy’s Sexual Assault Prevention and Response Program Manager.

The Air Force also screened its recruiters and sexual assault response personnel, but did not disqualify any from their positions, said Lt. Col. Brett Ashworth, an Air Force spokesman.

The Marine Corps did not respond to requests for information about its review, but USA Today reported that the service ran all its recruiters through a national sex offender registry and found no matches.

Lt. Col. Cathy Wilkinson, a DOD spokeswoman, said the department will continue to work with the services “to establish an environment of dignity and respect, where sexual assault is not tolerated, condoned or ignored and where there is clear accountability placed on all leaders at every level.”

Defense leaders have “no higher priority than the safety and welfare of our men and women in uniform, and that includes ensuring they are free from the threat of sexual harassment and sexual assault,” she said.