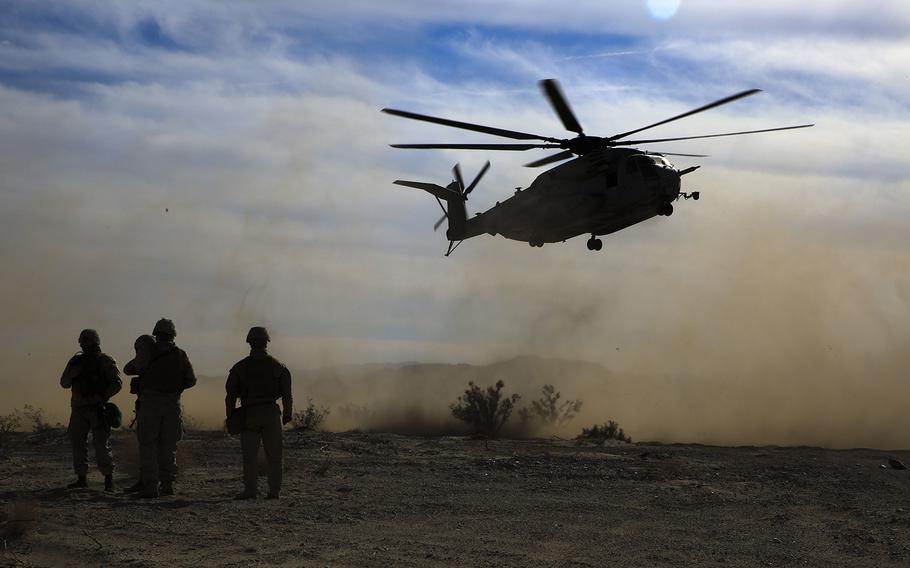 WASHINGTON — The Marine Corps has launched an investigation into a helicopter crash that killed four Marines during a routine training mission in southern California near the Mexican border, Marine officials said Wednesday.

A CH-53E Super Stallion heavy lift helicopter crashed Tuesday at about 2:35 p.m. local time, outside the border town of El Centro, Calif., with the crewmembers aboard, according to a statement by the 3rd Marine Aircraft Wing. The crew was stationed at Marine Corps Air Station Miramar, just north of San Diego.

Maj. Morgan Frazer, a spokesman for the unit, said additional details about the crash were not available Wednesday morning. The names of the Marines were expected to be released on Thursday. The Pentagon typically withholds identification of fallen troops until 24 hours after next-of-kin notification.

Deputy Coroner Derrick Lindberg with the Imperial Valley Sheriff's Office told The Associated Press on Wednesday that the crewmembers were recovered late Tuesday and taken to the coroner's facility. He said the Marine Corps would take custody of the bodies to conduct autopsies.

Marine officials said it was too early to determine what caused Tuesday’s crash. Local media reports indicated medical aircraft were sent to the scene of the crash, in a remote area just west of El Centro, some 70 miles west of San Diego.

The CH-53E, often deployed aboard amphibious assault ships, is the military’s largest, heaviest and most-powerful helicopter, according to its manufacturer, Sikorsky. The aircraft can carry massive loads, according to the Marine Corps, including a 26,000-pound light armored vehicle, 16 tons of cargo or a force of combat-loaded Marines to lead an assault.

But the aging platform has faced problems, especially in training, in recent years. The crash on Tuesday appears to be the deadliest CH-53 incident since a crash off the coast of Hawaii in 2016 killed 12 Marines during a nighttime training flight. The Marines ultimately ruled that crash was the result of pilot error, leading two of the massive aircraft to collide in the air.

Nonetheless, the Super Stallion fleet was described as “inadequate” in November by Marine Lt. Gen. Steven Rudder, the service’s deputy commandant for aviation. He said only 37 percent of the Marines' 143 CH-53s were airworthy.

Gen. Robert Neller, the Marine Corps commandant, has since said the service’s aviation programs were improving following a “horrible” safety record in 2017. He did not single out any specific program – including the CH-53 – as showing particular improvement.

The Super Stallion fleet is due to be upgraded to new CH-53K models known as King Stallions in the coming years. The Marine Corps has said it intends to buy 200 of the new, more powerful models, also produced by Sikorsky.

The crash Tuesday followed another Marine aviation crash in Africa.

The Harrier pilot, assigned to Marine Medium Tiltrotor Squadron 162 and embarked aboard the USS Iwo Jima, was listed in stable condition while being evaluated at Camp Lemonnier’s expeditionary medical facility, according to a Navy statement.

There were no reports of injuries to personnel on the ground or damage to the infrastructure at the airport. The cause of the crash is under investigation, the statement said.