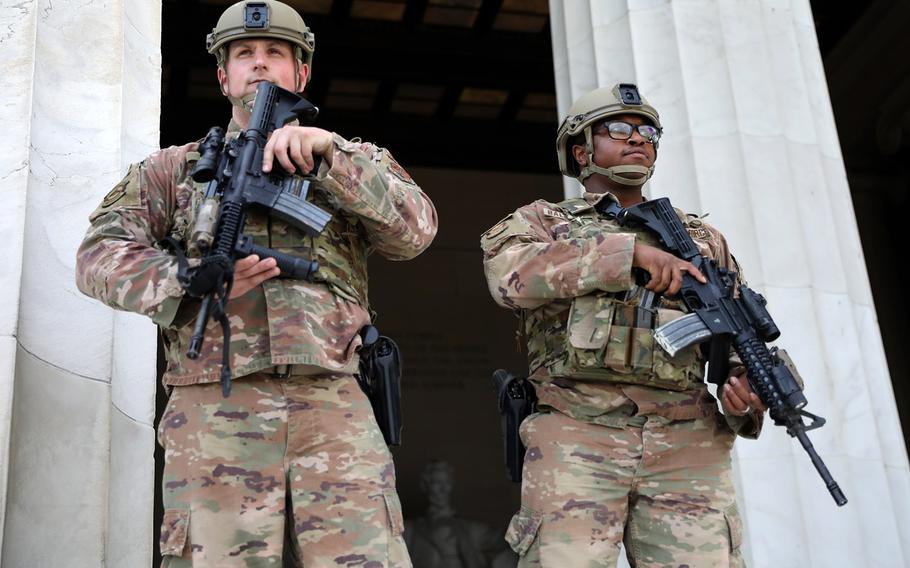 In a June 2, 2020 photo, District of Columbia National Guard airmen stand guard at the Lincoln Memorial after being deployed in response to protests and riots after the death of George Floyd. (Kevin Valentine/National Guard)

WASHINGTON — The Army approved a request made by the city government to deploy 250 D.C. National Guard personnel to support local law enforcement in the event that protests erupt after the verdict from the Derek Chauvin trial is announced, the National Guard said.

The city government made the request more than a week ago for the D.C. Guard to assist police with “street closures at multiple intersections in order to provide safety in and around pedestrian areas,” said Capt. Chelsi Johnson, a D.C. National Guard spokesperson.

The additional Guard support is approved until May 9, if needed, Johnson said.

The mission of the additional 250 troops is separate from the mission of the more than 2,300 Guard troops already deployed in the city. The troops who are operating at the Capitol have been providing support to U.S. Capitol Police as part of the response to the Jan. 6 riot.

The new request from the D.C. government came as closing arguments wrapped up Monday in the trial of former Minneapolis police officer Derek Chauvin, who is charged in the death of George Floyd. Thousands of people in the nation’s capital participated in protests that started in May in the wake of Floyd’s killing.

Christopher Rodriguez, the director of the D.C. government’s Homeland Security and Emergency Management Agency, said at a Monday news briefing that he put in a request to the National Guard for additional support to aid the Metropolitan Police Department.

“We’re requesting, on behalf of the Metropolitan Police Department, some assistance at traffic locations downtown, as well as some enhanced security for our metro stations in the downtown corridor, as well as a quick reaction force that can be deployed anywhere in the city in the event of large-scale protests,” Rodriquez said.

Pentagon chief spokesman John Kirby confirmed at a news briefing later Monday that the Army was reviewing the request and the Army secretary has the authority to approve it.

Rodriquez emphasized these steps are “precautionary measures” and National Guard members would not be armed. He also said only President Joe Biden can give approval to arming the DC National Guard, but the Army has the authority to approve the request under laws governing the Guard.

More than half of the 5,000 Guard soldiers and airmen who had been supporting the security mission in Washington since the Jan. 6 attack of the Capitol returned to their home states in mid-March.

During that month, Defense Secretary Lloyd Austin approved a request by the Capitol Police for an extension of National Guard support through May 23.

The almost 2,300 National Guard personnel stationed at the Capitol remain there “to continue supporting federal law enforcement agencies with security, communications, medical evacuations, logistics, and safety support,” the Guard said at the time of the extension.

Immediately after the riot at the Capitol in January, there were as many as 26,000 Guard troops in Washington.

Guard troops were also deployed to Washington in the summer of last year. For about a month after the killing of Floyd, a series of protests continued throughout the city and across the country. Activists expressed outrage for the death of the handcuffed Black man at the hands of a white police officer.