White House warns Russia could use chemical weapons in Ukraine, rejects false ‘conspiracy’ of US biolabs 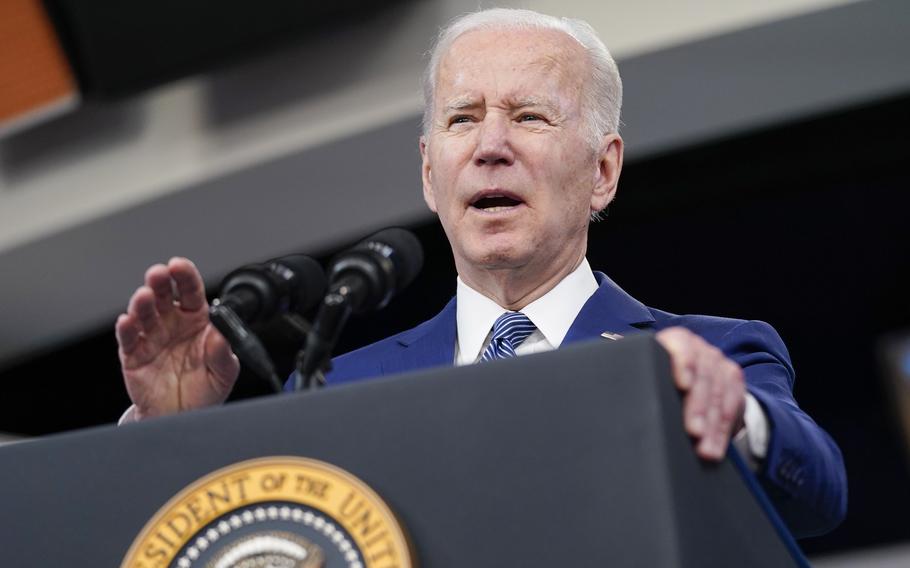 President Joe Biden speaks in the South Court Auditorium on the White House campus, March 4, 2022, in Washington. Biden has a solution for high inflation that seems counterintuitive: Bring factory jobs back to the U.S. This challenges a decades-long argument that employers moved jobs abroad to lower their costs by relying on cheaper workers. (Patrick Semansky/AP)

During a Thursday White House press briefing, Psaki doubled down on her comments, saying Russia has a history of “inventing outright lies” as she continued to push against Russia’s allegations that the U.S. is developing biological and chemical weapons in Ukraine.

Psaki also warned Thursday that Russia has the “capacity” to use weapons like these against Ukraine.

When asked what evidence the U.S. has to back the claim that Russia has these types of weapons, Psaki said she wouldn’t “get into specific intelligence” but repeated that Russia has a “a large biological and chemical weapons program.”

“The main issue that prompted my Twitter thread yesterday was that Russia has a history also of inventing outright lies like this, which is the suggestion that the United States has a chemical and biological weapons program or Ukraine does,” Psaki said.

“Russia is the country that has a chemical and biological weapons program. So the objective was to make clear the inaccuracy of the information, the misinformation they’re trying to put out.”

Psaki also said her goal was to “make clear to the world that they not only have the capacity, they have a history of using chemical and biological weapons, and that in this moment we should have our eyes open for that possibility.”

Psaki, however, wouldn’t say what the U.S. reaction would be if Russia conducted a chemical weapons attack in Ukraine.

“I’m not going to get into hypotheticals,” she said, adding that President Biden’s intention not to send U.S. forces to Ukraine “has not changed.”

She said Russia has long “maintained a biological weapons program in violation of international law” and cited its military intervention in Syria in support of the Bashar al-Assad regime and its suspected poisoning of Russian opposition figure Alexei Navalny in 2020 with a Novichok-like nerve agent.

“Now that Russia has made these false claims, and China has seemingly endorsed this propaganda, we should all be on the lookout for Russia to possibly use chemical or biological weapons in Ukraine, or to create a false-flag operation using them. It’s a clear pattern,” she added.

Psaki made the comments after Russian officials accused the United States of developing such weapons in Ukraine.

Igor Konashenkov, the chief spokesman for Russia’s Defense Ministry, said it was “obvious that in the wake of the special military operation, the Pentagon started having serious concerns about secret biological experiments uncovered on the Ukrainian territory.”

Kremlin spokeswoman Maria Zakharova also told reporters Wednesday that Russia had concluded that “in Ukrainian laboratories close to our borders, components of biological weapons were being developed.”

Rep. Thomas Massie, R-Ky., who recently voted against a House resolution supporting Ukraine, amplified Russia’s claims Wednesday on Twitter, saying he had not taken “the concern over Ukrainian biological labs seriously . . . until now.”

On Thursday, Britain’s foreign secretary, Liz Truss, told the press the United Kingdom was “very concerned about the potential use of chemical weapons,” and said such a move would be a “grave mistake” on the part of Russia.

Britain’s armed forces minister, James Heappey, told the BBC earlier on Thursday that if Russian President Vladimir Putin did seek to use chemical weapons, he should expect an “international response.” Heappey did not say whether he meant from NATO or individual countries.

The British minister said he had read “very high-level intelligence” last week about the possibility of Russia using chemical weapons and praised the United States for making public its intelligence on the issue as a deterrent to Moscow.

“President Putin needs to be clear that the use of chemical weapons is just the most despicable thing that anybody can imagine,” Heappey said.

“I don’t think it’s helpful to get into any firm commitment right now about where that red line sits. But I think President Putin needs to be very clear that when other countries have used chemical weapons, it has caused an international response,” he added.

The Washington Post’s Grace Moon contributed to this report.