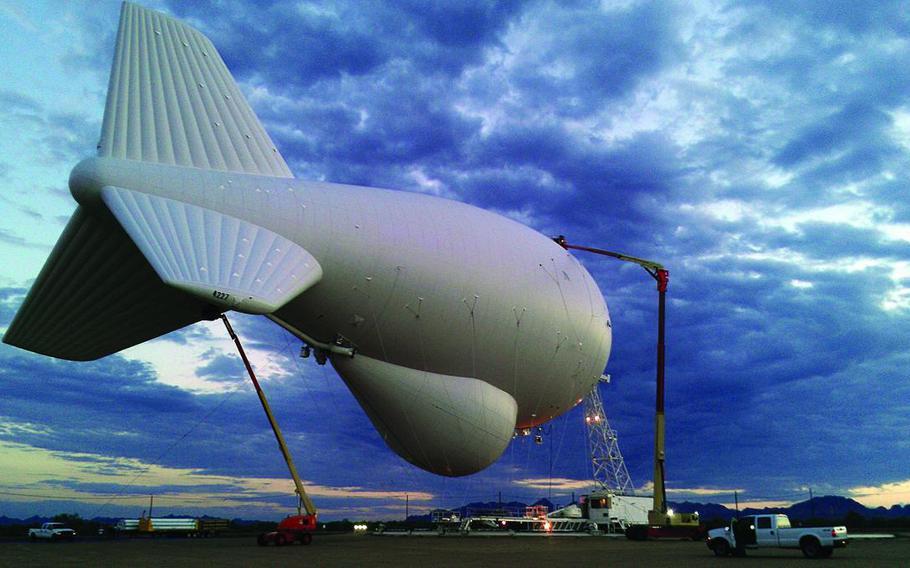 The Department of Homeland Security has requested the Defense Department help operate blimps to patrol along the U.S. border with Mexico. The blimps can provide surveillance from up to 10,000 feet in the air. (U.S. Customs and Border Protection )

The Defense Department has agreed to spend about $52.5 million to operate and maintain observation blimps at the U.S. border with Mexico as part of an ongoing mission in the region.

The original request to support the blimps called for about 1,500 additional troops to deploy to the border mission that supports the Department of Homeland Security and began in 2018, according to Rep. Henry Cuellar, D-Texas.

About 2,400 troops are now deployed along the southern border, but up to 3,000 are authorized to deploy through the end of September, based on an agreement signed by Defense Secretary Lloyd Austin. The service members are a mix of National Guard and active-duty personnel who work alongside Border Patrol agents in a variety of support roles that allow those federal agents to conduct direct border security.

But the DHS request approved Dec. 21 by Deputy Secretary of Defense Kathleen Hicks only calls for the operation and maintenance of large blimps, known as aerostats or persistent threat detection systems, “for assistance in detecting and monitoring drug-smuggling operations,” said Lt. Col. Chris Mitchell, a Pentagon spokesman.

Homeland Security had previously funded contracts for the aerostats, but the deals had gotten too expensive, Cuellar told reporters during a call in November. The department cut the blimps from its recent budget, but the south Texas congressman said he wanted to see their use brought back in some way.

The Pentagon’s approval to support six Border Patrol-owned aerostats was eligible to begin in January, with the additional Defense Department aerostats available starting in April, Mitchell said. Support for both types is slated to end in September, or at the end of fiscal year 2022.

The military used observation blimps in Afghanistan, and they can be outfitted with a variety of equipment to help observe ground, air and water traffic from up to 200 miles away, according to U.S. Customs and Border Protection. Others can offer real-time imagery to agents on the ground.