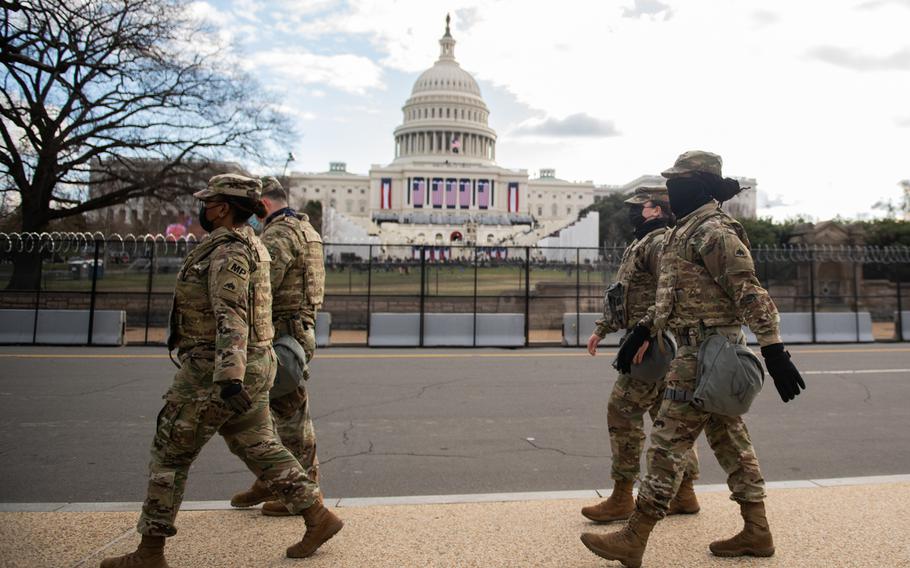 U.S. Soldiers with the District of Columbia National Guard, patrol around the Capitol during the Presidential Inauguration, Washington, D.C., Jan. 20, 2021. (Zachary Holden/U.S. Army)

Almost 26,000 Guard troops were assigned to Washington in the last two weeks to support local and federal law enforcement agencies for President Joe Biden's inauguration Wednesday. The heightened security was a response to the deadly riot Jan. 6 at the Capitol where a mob of former President Donald Trump's supporters stormed the building.

But there were no protests or violence during the inauguration.

“The planning and process may take several days, but arrangements are being made to return close to 15,000 troops as soon as possible and should conclude within a five to 10-day period,” according to a National Guard Bureau statement Thursday.

The Guard members have been seen manning checkpoints and standing posts around the Capitol grounds and streets that lead to the building as well as the National Mall and White House.

Sending troops home involves “equipment turn-in and accountability, travel arrangements, [coronavirus] screening and mitigation,” according to the Guard Bureau. Some of the service members were authorized to carry firearms for self-defense during the security mission.

Gen. Army Gen. Daniel Hokanson, the chief of the National Guard Bureau, said Tuesday during a news conference at the Pentagon that the reduction of troops in Washington is “conditions based."

“After the inauguration, we'll look at the conditions, and the environment and the mission set that we're asked to perform. And if that is below the number of personnel that we have, then we'll start identifying those folks to get them home as quickly as possible,” he said.

Once those 15,000 troops leave Washington, more than 10,600 Guard members will still be in the city, according to the National Guard Bureau.

Some local and federal agencies are asking for some troops to stay to help with additional support and “recuperation time for their forces to regroup,” according to the National Guard. About 7,000 troops will stay to help through the end of January.

Following the Capitol riot, former acting Defense Secretary Christopher Miller approved 6,200 National Guard members to be activated for up to 31 days in Washington to support local authorities. Hokanson said Tuesday that they expect that activation to last into February.

Those troops leaving will take ground transportation such as buses or aircraft flown by the Air National Guard. Some troops will travel on commercial flights as necessary.