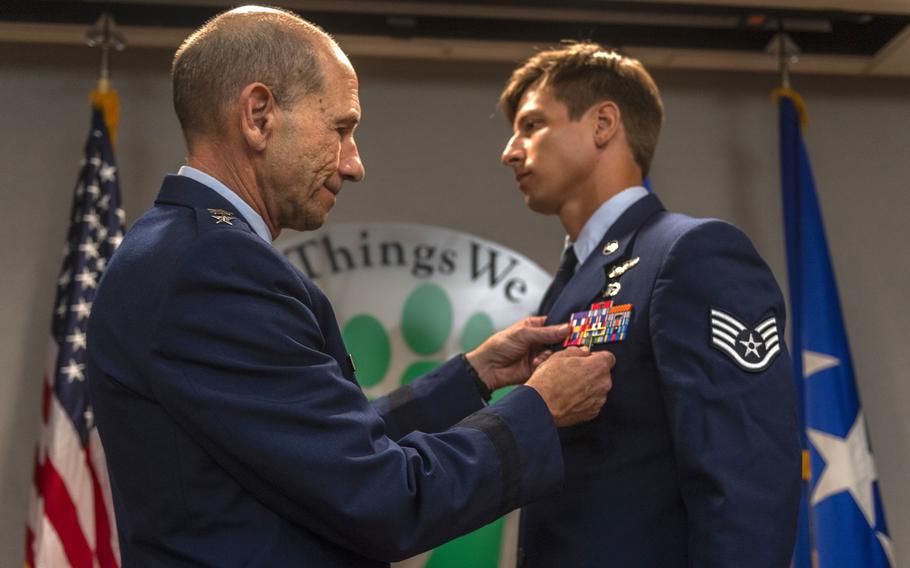 An Air Force pararescueman was awarded a Bronze Star with valor this week, following several surgeries and months of efforts to get back on duty after being seriously wounded in Afghanistan last year.

Shrapnel from a grenade blast ripped into Staff Sgt. Aaron Metzger’s right arm and chest while he treated two severely injured Afghan commandos he had carried out of the line of fire during a nighttime raid against the Taliban in April 2018.

The airman put a tourniquet on his own arm, helped one of the wounded Afghans into cover in a sheep shed and readied to fight with all he had left. Then a Green Beret showed up and Metzger calmly talked him through treating his wounds.

“When he found me, I felt a sense of relief,” Metzger said last year, several months after the mission. “I had my guard up this whole time because I was prepared to fight until the end.”

Before he could be evacuated from the battlefield, he’d be wounded again by gunfire while continuing to fight.

On Monday, during a ceremony at Georgia’s Moody Air Force Base, Gen. Mike Holmes said he was proud to present Metzger the military’s fourth-highest individual medal, with a “V” device for battlefield courage, noting both Metzger’s actions that April night in Afghanistan and his efforts to return to duty since.

“I know this room understands what you did better than most,” said Holmes, head of Air Combat Command, in front of leaders from the base, as well as Metzger’s family and his fellow members of the 38th Rescue Squadron. “I’m sure it’s an honor to be able to do this in front of people who understand.”

Standing in front of a wall decorated with a large pair of green footprints, a pararescue symbol, Holmes said Metzger was the son of a security forces master sergeant, but didn’t immediately join the service after high school and had first considered the Coast Guard.

“He got interested in the rescue swimmer program,” Holmes said. “Fortunately for us, their recruiter was never in the office ... but the Air Force guy was.”

Metzger enlisted to be a PJ but struggled to make it at first, spending a few years in another field before qualifying for the elite battlefield rescue specialty, Holmes said.

It was on his second deployment, assigned to Bagram Airfield’s 83rd Expeditionary Rescue Squadron, that Metzger earned the Bronze Star. He’d accompanied a joint U.S.-Afghan Special Forces team on a helicopter assault to disrupt Taliban networks, the award citation states.

Metzger didn’t speak at Monday’s ceremony, recorded in an Air Force video, but he was quoted describing the mission in a statement the service released after the USO awarded him the George Van Cleave Military Leadership Award in December.

At one point, while taking fire from a ridgeline about 250 meters away, he and another American had raced down an alley to a compound nearest the enemy position, the statement said.

“In order to maintain cover, I had to switch my weapon from my dominant hand to my [other] hand and shoot from my left side,” he said. “Bullets were piercing the walls six inches from us.”

When a grenade went off, sending an Afghan soldier tumbling, Metzger braved enemy fire to get to him, dragging the man from the upper floor of a building to cover on the first level, and putting a tourniquet on his left leg and arm.

Then someone motioned to a second wounded Afghan with his leg barely attached. After clearing a path to get to the man, Metzger found him with a weak pulse and “on his way out.”

Metzger carried him back to where he’d left the first patient, put a tourniquet on the second man’s amputated leg and reached for a bag valve mask to aid his breathing.

Then a grenade came over a wall and landed about 10 feet away.

“I didn’t have a chance to even react to it,” he said. “It blew me back on my ass and knocked the wind out of me. The only thing I could think about in that moment was, ‘Get back up, get back into it, get back up.’ And I did.”

Shrapnel had penetrated his right arm, chest and liver, the statement said. After taking cover and guiding the Green Beret through first aid, Metzger continued to fight and was later also shot.

For six hours, the assault team called for an aerial medevac. When it finally touched down, the badly wounded Metzger wouldn’t let anyone carry him so they could focus on security instead, Holmes said.

Five Afghans were also medevaced, including Metzger’s patients. The Afghan who took cover in the shed lived but it was unclear whether the second man survived.

For his wounds, he had been presented a Purple Heart while still at Bagram, said Holmes, who praised some of those gathered in the auditorium at Moody for helping Metzger recover.

For his part, Metzger hoped the soldiers he fought with would also be recognized for their bravery.

“All of those men I was with worked their asses off and put their lives on the line to protect me,” he said last December.