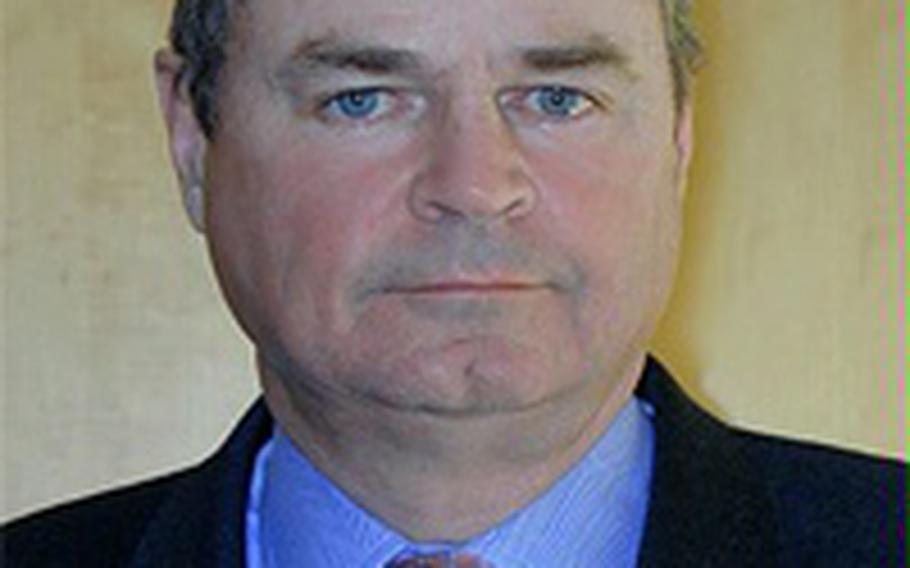 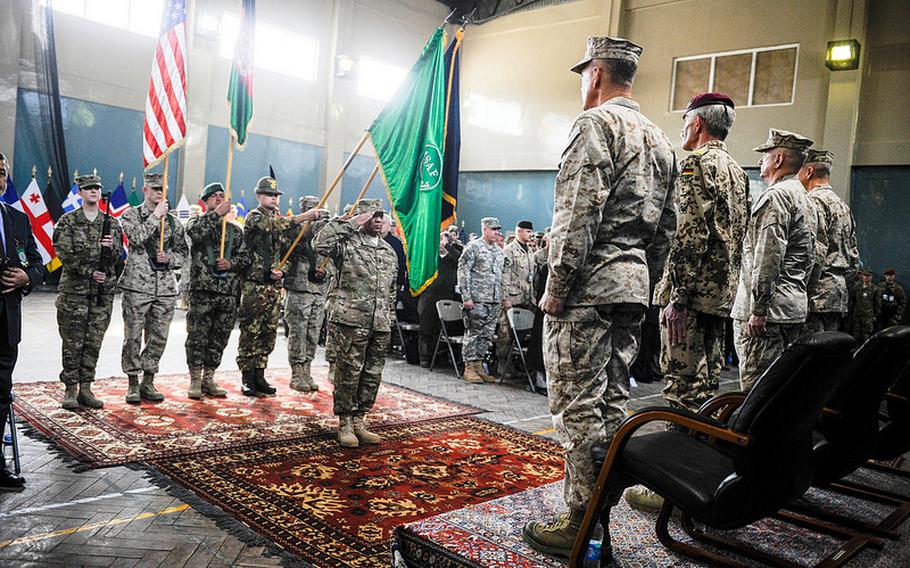 Gen. Joseph F. Dunford, on the left of the podium, commander of ISAF in Afghanistan, assumes command from Gen. John Allen at a change of command ceremony in Kabul, Afghanistan, Feb. 10, 2013. (ISAF Media/Flickr)

KABUL — One week after what was supposed to be a major step toward peace in Afghanistan, sniping continues over the opening of a Taliban political office in the Gulf nation of Qatar. Meanwhile, international forces struggle to limit the damage and reclaim the narrative of a war that is supposed to be winding down.

The opening June 18 of the Taliban office in Doha stole the spotlight from Afghan President Hamid Karzai, who had organized a large ceremony on the same day to announce that Afghan troops would be assuming responsibility for security throughout the country.

But with images of Taliban representatives raising their flag and referring to The Islamic Emirate of Afghanistan — as the country was known when the Taliban were in power — Karzai reacted by immediately suspending government participation in any peace talks. He also suspended talks over a bilateral security agreement with the United States that is key to keeping American troops in the country after international forces end their combat role in 2014.

The quarrel has simmered ever since.

With the backlash over the opening of the Doha office still dominating news out of Afghanistan and obscuring the critical handover of responsibility for security to Afghan forces, the commander of international forces in Afghanistan, Gen. Joseph Dunford, sought on Sunday to deflect attention from the controversy.

“Given the many news stories this past week, it would be easy to forget the historic milestone we celebrated on June 18th,” Dunford said in a statement. “After more than a decade of conflict and sacrifice, the Afghan National Security Forces are now the lead for securing their people and their country and ISAF is in support of its Afghan partners.”

Meanwhile, the U.S. is scrambling to rescue the process, sending James Dobbins, the U.S. special representative to Afghanistan and Pakistan, to Doha on Saturday, though it remained unclear whether he had even met with the Taliban. On Monday, Dobbins arrived in Kabul to speak with Karzai about the peace process, according to a statement from the U.S. Embassy in Kabul.

Although the Taliban have since removed their flag and a plaque identifying their compound as “The Political office of the Islamic Emirate of Afghanistan” — and Qatari police even removed a flagpole from the grounds — the government in Kabul does not appear any closer to sending its representatives to Doha. A statement from the presidential palace on the removal of the sign and flag made no mention of peace talks.

Taliban officials in Doha, who have been tight-lipped since the controversy began, did not answer their phones Monday. Another Taliban spokesman referred questions to the Doha representatives.

A representative of Afghanistan’s High Peace Council, the body charged with spearheading peace talks, claimed the insurgents have not yet shown they are serious about peace.

“There are stumbling blocks (to peace),” said Mohammed Ismail Qasimyar, a spokesman for the High Peace Council. “They put rocks on the road so the traffic stopped. The form and the content of the opening ceremony was designed, to my mind, to not be helpful to holding peace talks.”

He reiterated that negotiations could be held only within the framework of the Afghan Constitution and that issues such as the rolling back of women’s rights would not be on the table.

“Our people need peace and they support peace, but at what price?” Qasimyar said.

Another factor undermining any good will between the warring sides, is the fighting that continues to rage in much of the country. Afghan troops are being killed at an alarming rate and international forces are still regularly targeted by insurgents.

Qasimyar said the High Peace Council would consider a cease-fire if and when peace talks start, but said hopes faded when the Taliban opened their office with a belligerent statement in which they referenced “waging jihad” and working to “free its country from occupation.”

“In that opening ceremony, a person representing the leadership of the Taliban said beside the political process we will continue our military process,” he said. “It means an office that was solely to be opened for peace talks, from there you talk about war and continuation of war.”