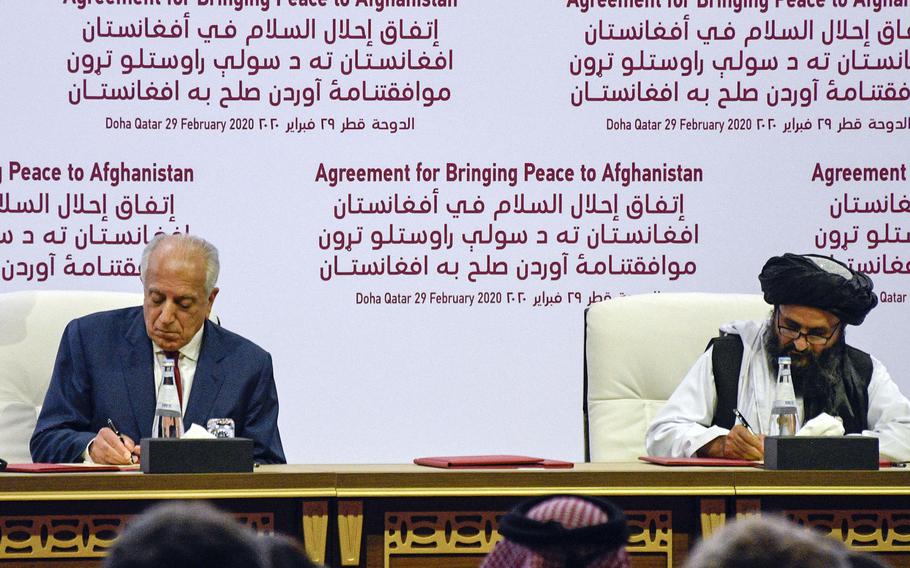 Zalmay Khalilzad, American special envoy for Afghan reconciliation, signs a peace deal with the Taliban, along with Mullah Abdul Ghani Baradar, the militant group's top political leader, in Doha, Qatar, Feb. 29, 2020. A threat to the accord may be the uncertainty over what each side agreed to, experts and lawmakers said. (J.P. Lawrence/Stars and Stripes)

KABUL, Afghanistan – During the first week of the U.S. peace deal with the Taliban, the militant group resumed its offensives against Afghan troops, provoking an outcry among U.S. officials who say the violence is a threat to the agreement and causing confusion over its terms.

“There definitely is ambiguity between the text of the agreement and what U.S. officials seem to be saying they expect from the Taliban,” said Andrew Watkins, a senior Afghanistan analyst at International Crisis Group, a nonprofit think tank based in Brussels. “Things have already reached the point where the U.S. is obliged to draw clear lines.”

Just two days after signing the deal Feb. 29, the Taliban told its fighters to resume attacks against the Afghan security forces, although not against U.S. and foreign troops. These attacks broke a partial truce that stood before the deal’s signing and prompted a U.S. airstrike Wednesday to protect Afghan troops.

U.S. officials say the Taliban were not living up to their end of the deal. “Taliban leadership promised the international community they would reduce violence and not increase attacks,” Sonny Leggett, a spokesman for U.S. Forces-Afghanistan said on Twitter.

However, this is not stated in the agreement released to the public, which says that a cease-fire is to be discussed in talks between the Afghan government and the Taliban, slated for March 10.

“Nothing that has happened in recent days — the arguments over the prisoner release, the Taliban assaults on Afghan forces, the US strike on the Taliban — violates the deal,” said Michael Kugelman, deputy director of the Asia Program at the Wilson Center in Washington.

Because the text of the deal differs from the way U.S. officials are describing it, there has been “some confusion about exactly what has been agreed,” said Jarrett Blanc, senior fellow at the Carnegie Endowment for International Peace, a foreign policy think tank.

U.S. officials have given the impression they “drove a hard bargain,” said Stephen Biddle, a senior defense fellow at the nonpartisan think tank Council on Foreign Relations, “but being unhappy with the Taliban being more violent than we hoped they would be is not consistent with any clause in the actual signed document.”

Spokesmen for U.S. Forces-Afghanistan and the State Department declined to comment.

The public portions of the deal broadly outline each side’s commitments: If the Taliban keep terrorists from operating in Afghanistan, stop attacking the U.S. and its allies, and hold peace talks with the Kabul government, the foreign forces will begin a phased withdrawal to leave the country in 14 months.

Less known is what’s in two classified additions attached to the deal, which Secretary of State Mike Pompeo and Defense Secretary Mark Esper have described as implementing arrangements.

Lawmakers such as Democratic Rep. Eliot Engel of New York said the annexes should be declassified and released to the public. Congressional leaders viewed the documents in a secure vault, and they do not contain sensitive information that would jeopardize national security, said Engel, chairman of the House Foreign Affairs Committee.

“After 18 years of fighting the Taliban, the American people deserve to see all aspects of the Trump-Taliban deal,” Engel said in a statement sent to Stars and Stripes. “I’m deeply concerned that the administration might be abusing classification to keep certain details out of public view.”

Nearly two-dozen House Republicans, led by Wyoming Rep. Liz Cheney, have also demanded clarity on the deal and have expressed misgivings. Cheney has said the public deserves to “know precisely what deals have been cut in our name with the terrorists who harbored those who attacked us on 9/11.”

Despite the outcry from Congress, it’s unlikely lawmakers will push to revise the deal, as both parties broadly favor ending America’s longest war.

“It’s not the best we could have hoped for, but this enables the next critical round, which is intra-Afghan negotiations,” Scott Worden, director of Afghanistan and Central Asia programs at the U.S. Institute of Peace in Washington, said Friday. “This was the price of admission to that.”

The biggest threats to the deal would be if a Taliban attack kills U.S. troops or if the hardline Islamist group demands harsh restrictions against women, said Robin Raphel, who served as a U.S. diplomat to Afghanistan and Pakistan in the 1990s.

Deadlines contained in the deal are likely to slip, experts say, and even if the Taliban and Kabul come to the table for talks, those negotiations could break down.

“It’s gonna be a long, [winding], bumpy road -- lots of twists and turns, ups and downs,” Esper said this week.

Stars and Stripes reporter Caitlin Kenney contributed to this article.