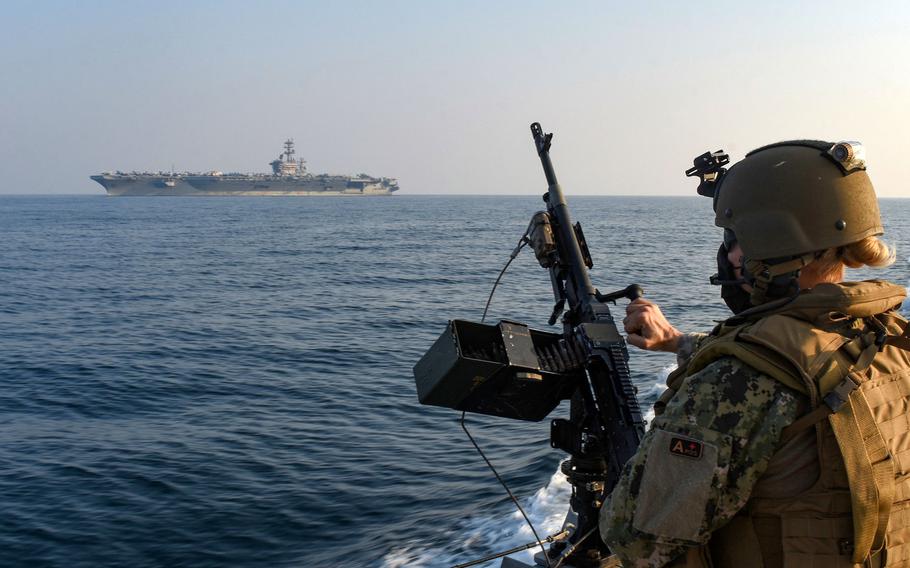 Chief Petty Officer Jennifer Kwiatkowski stands security watch aboard a Mark VI patrol boat during an escort of the aircraft carrier USS Nimitz through the Gulf of Bahrain, inbound to a maintenance and logistics visit in Bahrain, Oct. 7, 2020. (Timothy Clegg/U.S. Army)

Chief Petty Officer Jennifer Kwiatkowski stands security watch aboard a Mark VI patrol boat during an escort of the aircraft carrier USS Nimitz through the Gulf of Bahrain, inbound to a maintenance and logistics visit in Bahrain, Oct. 7, 2020. (Timothy Clegg/U.S. Army) 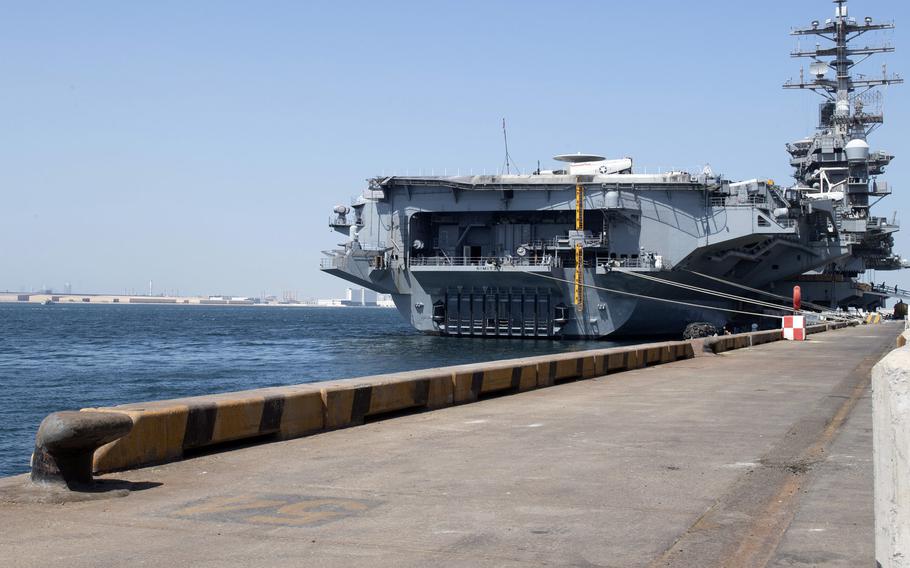 The aircraft carrier USS Nimitz sits pier-side in Bahrain, Oct. 8, 2020. The ship was in Bahrain for a maintenance and logistics visit. (Kyle Merritt/U.S. Navy)

The USS Nimitz became the first U.S. aircraft carrier to put the Navy’s coronavirus-related port call procedures to the test in Bahrain when it pulled into port last week.

With the guided-missile Cruiser USS Princeton, the Nimitz arrived at Manama for a scheduled visit that began last Wednesday and ended Sunday, said Cmdr. Rebecca Rebarich, spokeswoman for the Bahrain-based U.S. Naval Forces Central Command and the 5th Fleet.

During their stay — a working port call for logistics and maintenance — the ships’ sailors and Marines got to “rest and unwind in designated areas on the pier” that complied with U.S. and host nation measures to stem the spread of the coronavirus, the service said in a statement on Sunday.

The Morale, Welfare and Recreation program set up food, drinks and various games in cordoned-off areas to allow the crews to stay in a “COVID-free ‘bubble,’” Rebarich said. The procedures have been developed and refined during several smaller ships’ port calls, which were coronavirus-free, Rebarich said in an email.

The crews were also able to use the Navy Exchange’s contactless “Downrange Program,” she said.

Originally designed for forward-deployed troops lacking access to the exchange, the program has shifted to support troops in quarantine or who are unable to disembark from ships in overseas ports, the Navy said in April.

The Nimitz and Princeton were back at sea in the Persian Gulf this week, where the carrier marked the Navy’s 245th birthday on Tuesday with a video on Facebook showing jets taking part in flight operations from the carrier strike group.

The 5th Fleet also commemorated the 20th anniversary on Monday of the attack on the USS Cole, which killed 17 Americans during a port visit in Yemen on Oct. 12, 2020.