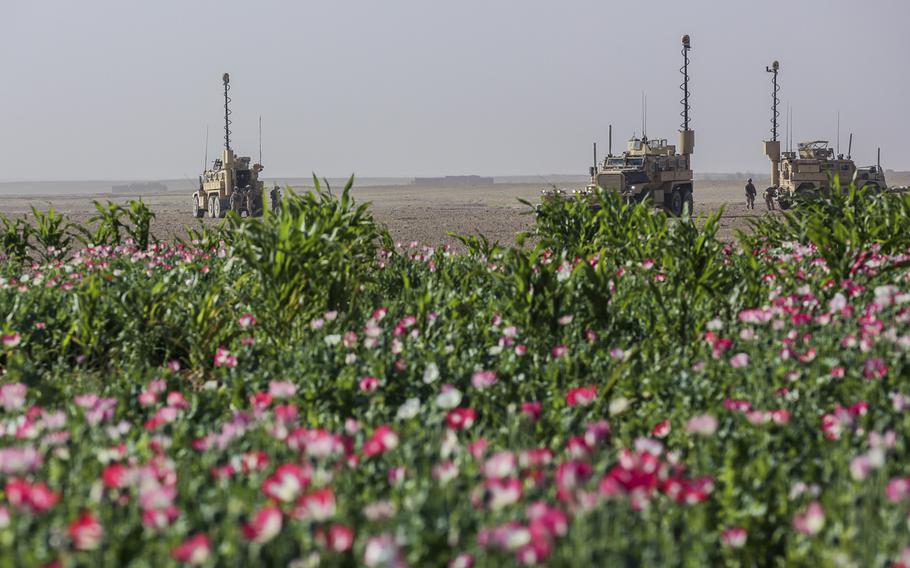 The most recent findings by the Special Inspector General for Afghanistan Reconstruction come just a few months ahead of the withdrawal of coalition combat troops, when the vast majority of U.S. and NATO forces will leave the country.

SIGAR cited a United Nations tally of net land area used for poppy cultivation in 2013: more than 500,000 acres, a 36 percent jump from the previous year and a historic record. The lion’s share of that cultivation, the U.N. says, comes from Helmand and Kandahar provinces, two regions that were the focus of the 33,000-strong American troop surge four years ago.

“That is equivalent to more than 800 square miles — more than twice the size of all the boroughs of New York City, or 12 times the size of the District of Columbia — planted solid with opium poppies,” SIGAR wrote in a previous report in January.

Afghanistan remains the world’s top producer of opium, supplying more than three-quarters of the world as well as a growing domestic addict population, the U.N. report said. Along with illegal mining and extortion, the illicit drug trade is a major source of funding for the Taliban. International officials have said that the rebels are using the vast profits generated by the opium trade to buy ammunition and weapons and to fuel the insurgency.

The SIGAR report said that poppy production had quadrupled in eastern Nangarhar province, deemed poppy-free in 2008 and previously considered a model for eradication efforts.

In its report, SIGAR included responses to its findings from the U.S. Embassy in Kabul, which said efforts to build up the Afghan government’s counternarcotics capabilities were “still in progress,” and from the Defense Department, which blamed the failure of poppy eradication on the “lack of Afghan government support for the effort.”

Experts say the Taliban are not the only ones cashing in on opium.

William Byrd, a senior expert on Afghanistan with the United States Institute for Peace and former head of the World Bank office in Kabul, suggested that elements of the Afghan government may be profiting from the crop just as much as the armed groups that oppose it.

Poppy profits fueling the Taliban insurgency aren’t the main danger, Byrd said. Instead, the principal threat lies in the corrupting capacity such huge sums of money have on a poor nation’s leadership, he said.

“It’s not a simple equation, as there’s just not any black-and-white line.”

Paradoxically, the Taliban had orchestrated one of the world’s most successful anti-drug campaigns before their ouster by a U.S.-led coalition in the wake of the Sept. 11, 2001, attacks. The militants, in collaboration with the U.N., banned the growing of poppy, which resulted in a 91 percent drop in cultivation in the final year of their rule.

But since then, opium production has increased virtually every year despite continuous efforts by the Afghan government, international agencies and coalition forces to persuade farmers to switch to other crops.